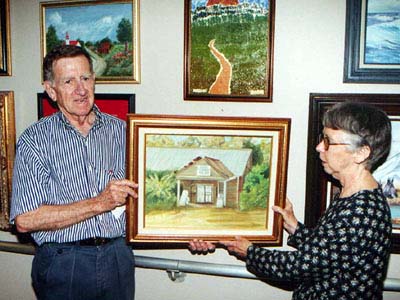 Charlie Carmichael and Lucy Millsaps, volunteers at Methodist Rehabilitation Center, are hanging paintings and drawings for the Jackson hospital's annual Goodwill Art Exhibit. More than 200 disabled artists, including 70 students, from around Mississippi will have their art displayed at the exhibit through June 11.

They are preparing for the 13th annual Goodwill Art Exhibit that is held each year at the Jackson hospital. A reception for the artists and the public is set for 2 p.m. on Sunday, May 6. The art will remain on display at MRC for the public to see until June 11.

More than 200 disabled artists, including 70 students, from all around Mississippi have their art displayed at the exhibit. Each contestant can enter up to three works of art in several categories, including watercolors, drawings and sculptures. The overall winner receives a $1,000 award with the top two pieces remaining on permanent display at MRC and Goodwill Industries. Second place, third and an honorable mention will receive $700, $500 and $50 respectively. A purse of $250 will be given to the student winners.

“This exhibit has really grown over the years,” said Sandra Walker, director of Volunteer Services at MRC. “We have lots of visitors that return each year to see the art we have on display. Our contestants may be limited in some ways, but through art, they are able to beautifully express themselves.”

Contestants have various disabilities, both physical and mental, including Terri Cribb of Madison who is legally blind, and last year’s winner, Bernice Pearson of Louisville who suffers from an advanced form of arthritis which causes her arms and hands to clench tightly.

“Terri is blind and she has some of the most beautiful works,” said Carmichael as he took a brake from hanging. Carmichael and Millsaps are MRC volunteers who donate their time to help patients and staff at the hospital. The Goodwill Art Exhibit is a highlight of the year for both of them, they said. Millsaps—an artist herself—occasionally works with patients at MRC, helping them learn to paint.

Local artists will serve as judges of the exhibit, Walker said. “We have a wide variety of art on display from the most childlike to the most intricate and everything in between.”

This exhibit and art in general serve as a form of therapy for the entrants, Walker said. “It’s a very private thing for them. But I’ve had several come up to me and thank us for giving them this opportunity.”

Goodwill Industries is one of the world's largest providers of employment and training services for people with disabilities and other conditions such as welfare dependency, illiteracy, criminal history and homelessness.