Published on May 21, 2001
Collin Johnson
Health and Research News Service 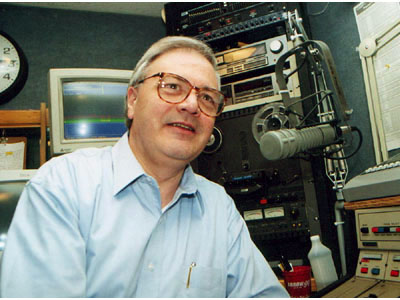 More than a year after suffering a stroke and after countless hours of therapy at Methodist Rehabilitation Center in Jackson, Marshall Magee, the 54-year-old president and general manager of Proteus Communications (radio stations Arrow 94.7 and WVIV 93.9) is back at his desk and on the air.

JACKSON, Miss.—Like most folks, Marshall Magee didn’t know a lot about stroke until he experienced it firsthand.

More than a year later and after countless hours of therapy at Methodist Rehabilitation Center in Jackson, the 54 year-old president and general manager of Proteus Communications (radio stations Arrow 94.7 and WVIV 93.9) is back at his desk. But he’ll be the first to tell you, it wasn’t easy. A stroke is nothing to play around with.

One Sunday afternoon in April 2000, he was picking up some ribs to take home to his wife for supper, he recalled. “That (the ribs) was probably part of the problem,” he kids, able to joke about it now.

“I had just turned onto Ridgewood Road when the right side of my body suddenly wasn’t acting the way it should. At first, I thought I had food poisoning. I was sitting there trying to figure out what was wrong with me, but I couldn’t think clearly. It was pretty scary.

“I struggled to keep the car on the road and I pulled onto a side street and was able to dial my home number on the cell phone. My wife, Sheryl, called an ambulance,” Magee recalled.

Magee was first treated at a local hospital before arriving at MRC where therapists worked with him to overcome some of the damage inflicted by the stroke and to learn how to live with other deficits.

“A case like Marshall’s just proves it can happen to anyone. He’s young and relatively healthy,” said Dr. Rahul Vohra, medical director at MRC and the director of the hospital’s comprehensive stroke rehabilitation program.

A stroke or brain attack is caused by a sudden decrease in the flow of blood to the brain. When blood cannot reach the brain, brain cells are deprived of oxygen and die. Functions normally controlled by the damaged area of the brain are then impaired.

“It is critical that everyone know the risk factors and warning signs of stroke and that they seek treatment immediately in an emergency room if they experience any of the symptoms,” said Dr. Vohra. “People need to think of a stroke as they do a heart attack—every second counts.”

Magee had a fast initial recovery that gave doctors cause to hope he would continue to improve. The earlier a patient sees recovery, the more function the patient will likely gain in the long term, Dr. Vohra said. “He was up and walking early on, but he still had some cognitive deficits, especially with his memory so that’s what we really had to focus on.”

Magee’s desire to get better also played a big part in his recovery, Dr. Vohra added. “The more a patient is willing to let us challenge them, the harder their brain will work to repair itself. If they just sit at home, they’re not going to get better,” he said.

“My eyes didn’t work well at first and I had to get new glasses because everything was so blurry,” Magee said. “It’s corrected itself some, but I’ll never be able to watch TV or look at a computer screen without glasses.”

Writing was also a challenge, not just because of physical limitations but mental ones as well. “The problem is your memory. Sometimes I’ll have to stop and remember what I’m writing and often I’ll have to stop and think of the alphabet to find the words I’m looking for. Certain letters just wouldn’t come to me right after the stroke,” he said.

Magee was fortunate. Stroke is the third leading cause of death and the leading cause of serious, long-term disability in Mississippi. “Our state and the other southeastern states have a higher death rate due to stroke than any other region in the country,” said Dr. Vohra. “Heredity, poor diets and unhealthy habits combine to make stroke a major health risk in Mississippi.” Magee has since learned that high blood pressure played a big part in his stroke.

“They’re pretty tough. They really put you through the ropes. You don’t want to believe what you’ve been through or that you need this therapy, but they push you and you realize that life is going to be a lot harder if you don’t do the work,” he said.

“Marshall was great to work with,” said Wendy Barrilleaux, one of several physical therapists who work full-time with stroke patients at MRC. “He had a great attitude. I think he just saw his stroke as a bump in the road that he was determined to get over and get on with his life.”

He couldn’t help but be positive, Magee said. “Whenever I was feeling sorry for myself, I’d see someone who was a lot worse off than I was, but who had a much better attitude than me. So I tried to be cheerful and keep everyone up.”

MRC nurses and case managers coordinate care for Magee and other stroke patients. “Family education is one of our priorities,” said Shirlene Allen, a registered nurse in the MRC stroke program. “We work with family members to help them understand what a stroke is and how it affects the patient. We make sure they understand how to care for the patient after he goes home.”

After going home, Magee enrolled in MRC’s Quest program that teaches groups of stroke and brain injury patients necessary skills that allow them to go back to work and reintegrate into society. “The best thing about the program is getting to see the other patients and share what you’re going through with them,” he said.

He still has occasional weakness on his right side, especially with his right leg. Occupational therapists at MRC taught Magee how to drive again using his left leg when necessary.

“You’re learning so much that when the time comes to go, it’s tough. You don’t want to,” Magee said. “I knew I was going to miss going out there and seeing those people who are making me do things that I know I need to be doing to get better.”

Today, he’s back behind his desk and on the air again at Arrow 94.7 and WVIV 93.9. Radio has been his passion since breaking into the business in high school working at 1300 WRBC. “I wanted to be back here as soon as possible,” he said.

He’s learned to be more careful with his body and not to take good health for granted, he said. “I’m much more cognizant of taking care of myself and working to keep my blood pressure down and I have to be more aware when driving or climbing steps.

“My experience at MRC after the stroke was just one of those great, positive ones. Working with other patients made me more mindful of others, especially those in wheelchairs. It’s made me a better, more caring person.”

“Successful stroke rehabilitation depends on the extent of the injury, the patient’s attitude, the support of family and friends and, most importantly, the experience and skill level of the rehabilitation team,” said Dr. Vohra. “MRC offers the state’s only comprehensive stroke rehabilitation program. And that’s important because here each patient’s care is coordinated between different disciplines like physical, speech and occupational therapy. Our nurses, physicians and therapists have unparalleled experience helping stroke patients recover.”

May is national stroke awareness month.