Published on May 31, 2001
Jim Albritton
Health and Research News Service 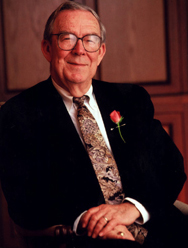 Wilson, who also served as chairman of the board of trustees at MRC for 25 years, died of a stroke on September 25, 2000.

The resolution, from the conference’s health and welfare ministries committee, also recognizes the naming of MRC as one of America’s best hospitals by U.S. News and World Report as one of Wilson’s many accomplishments.

“Earl Wilson was an exceptional man who saw people in need and tried to help,” said Mark Adams, president and CEO of MRC. “From the very beginning he pledged to make Methodist Rehab an exceptional facility and to be the first in rehabilitative research, treatment and care.

”The resolution also honored Wilson and his wife, Martha Lyles Wilson, for their work with the Wilson Research Foundation. The Foundation provides grants for brain and spinal cord injury research at MRC and other research institutions.

“Mr. Wilson was a tremendous community leader, a dynamic force,” said Dr. Julius Cruse, professor of pathology at the University of Mississippi Medical Center who received a grant from the Foundation to conduct spinal cord injury research. “It will be a long time before we see another person of his character pass this way.”

“Earl had an amazing ability to gauge the future and to think creatively about how to approach it,” said Rev. Jerry Mitchell, executive director of the Methodist Foundation. “He has been called a dreamer and a doer, and it’s true. He could get things accomplished and he was gifted at recruiting and inspiring the right people to work with him.”