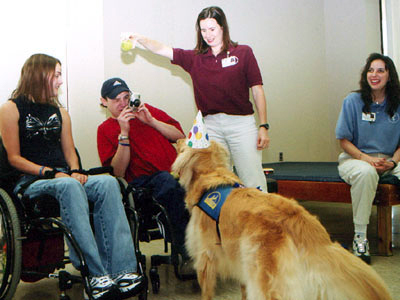 JACKSON, Miss.—Methodist Rehabilitation Center honored one of its most loved and valuable staff members with a birthday and anniversary party.

Fair, a golden retriever who is turning four, is celebrating two years of working with spinal cord and brain-injured patients at the Jackson hospital. He was trained by Canine Companions for Independence of Santa Rosa, Calif., to work with patients who have disabilities or limitations. He is one of only five facility dogs working in the organization’s eight-state Southeast region and the only one in Mississippi.

“Fair went through months of basic training and then had six months of advanced training before he came to Methodist Rehab,” said Erin Pryor, Fair’s handler and a physical therapist in the hospital’s brain injury program.

Fair works with patients on balance and control and helps some patients feel more comfortable after sustaining a serious injury. He can pull a patient’s socks off or retrieve a thrown tennis ball helping a patient’s arm strength and range of motion.

Patients and co-workers attended a party on the hospital’s fifth floor and gave Fair gifts from his wish list: milk bones, tennis balls and a dog bed.

John Michael Daniels, of Gulfport, who suffered a spinal cord injury in a car accident said Fair made him more comfortable in a wheelchair.

“I was very nervous when I first got here and things were different and kind of confusing” Daniels said. “Fair definitely helped out and set me at ease,”

“He’s a spirit lifter for the patients,” Pryor added. “He makes everyone smile.”