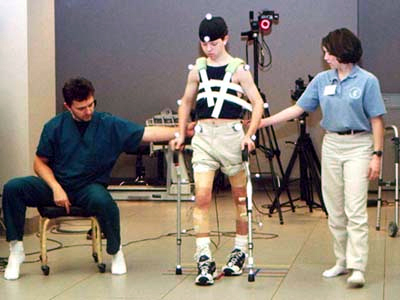 JACKSON, Miss.—Sitting cross-legged on the floor, Dr. Terry Horn makes a final turn of his socket wrench to secure a $15,000 force-measuring platform into place. For him, the maintenance of the sensitive instruments in his laboratory is a labor of love.

Dr. Horn, the director of Methodist Rehabilitation Center’s Motion Analysis and Human Performance Laboratory, has in three years transformed the forgotten storage space on the hospital’s second floor into a state-of-the-art research lab—the only facility of its kind in Mississippi and one of only a few in the United States.

“When I first arrived, this was just a big empty room,” he recalled. “There was exposed wiring and ductwork everywhere, and a single 100 watt light bulb hanging from the ceiling.”

Today, researchers and physicians at the Jackson hospital use the $500,000 facility to analyze the motion of patients as they perform activities of everyday living, especially walking. The information they acquire is used to determine how successful different treatments may have been on a given patient. Ultimately, their work will translate into more efficient and productive rehabilitation strategies for future patients.

“By testing patients before they begin a specific program of therapy, and then at its conclusion, we can determine just how much the intervention has actually benefited them in performing common tasks like walking and reaching,” Dr Horn said.

Dr. Horn came to MRC from the Division of Orthopedic Surgery at the University of Alabama at Birmingham. Working at the Children’s Hospital of Alabama, he helped to develop a motion analysis laboratory that was exclusively devoted to the evaluation of walking patterns of pediatric cerebral palsy patients. The MRC facility is designed similarly, but it is the only laboratory in the Southeast and one of only a few in the entire nation that tests patients who have suffered brain or spinal cord injuries or a stroke.

“That’s one of the unique aspects of this facility,” Dr. Horn said. “Probably 90 percent of the other motion labs in the country are dealing with kids with cerebral palsy. We are one of a handful that is applying what we’ve learned from years of studying CP patients to try to help individuals with other neurological disorders.”

Dr. Horn and his assistant, Luly Loret de Mola, use several high-tech instruments to analyze the movement characteristics or biomechanics of their patients. In addition to the force platforms, high-speed cameras and EMG electrodes that sense muscle contractions are typically employed during a test.

“We collect a huge amount of data during a test session, so there is a good deal of signal processing and conditioning that occurs after the patient leaves the lab,” explained Loret de Mola. “However, once the analysis is complete, we have a very comprehensive picture of exactly how the patient is performing, how they deviate from normal movement patterns, and more importantly, how their biomechanics change due to the intervention.”

The two investigators are working with MRC physicians on a number of research projects. Patients like 16-year-old Brett Hornick of Petal have gained first-hand appreciation of the importance of these studies. After suffering a spinal cord injury in a bike accident, Brett was admitted to MRC to begin a new therapy—treadmill gait training—that has been used to help some spinal cord injured patients learn to walk again.

For several months, Brett trained on the treadmill under the direction of Dr. Dobrivoje Stokic, director of the Neurophysiology Lab at the Center for Neuroscience and Neurological Recovery (CNNR) at MRC, and a team of therapists. Thanks in part to the new therapy, Brett is walking with a cane. The motion lab staff used state-of-the-art technology to determine how much change has occurred in Brett’s walking pattern—valuable information that will be used to help other patients.

In another project, brain-injured patients are tested in the lab for muscle stiffness and involuntary contractions. Dr. Stuart Yablon, medical director of the brain injury program at MRC, uses these test results to assess the effects of different drugs. One of these, baclofen, can be taken orally, but may have even greater effect when it is delivered via a surgically implanted pump.

Drs. Yablon and Horn have been working together for over a year to develop a screening protocol for identifying favorable candidates for the pump. The goal of the study is to determine if the patient’s response to a single injected dose of baclofen can be used to predict how much they stand to benefit from having the pump implanted. The motion lab is critical since conventional clinical examination techniques don’t objectively assess the patient’s response to the drug.

Traditionally, spasticity is evaluated with the patient lying quietly on an examination table while a therapist or physician evaluates their muscle tone and range of motion. However, the effects of their spasticity may change dramatically when they are up and moving.

“The lab is a great tool for the physician, because it allows us to objectively characterize the patient’s functional abilities,” said Dr. Horn. This is information that a hands-on physical examination can’t provide.

“With patients who are candidates for the pump we perform a baseline test before they’re given the drug, and then every two hours after they receive it, to determine if the injected baclofen is having an effect on their walking ability,” Dr. Horn said.

Drs. Horn, Stokic and Yablon are part of a team of physician-scientists at MRC who work to translate basic neuroscience research into useful therapies that will benefit patients suffering from neurological illnesses and injuries.