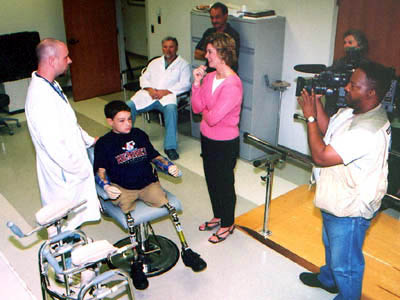 JACKSON, Miss.—What a difference three days can make in a young man’s life.

When 15 year-old Charlie Rogers left his Nashville home and climbed into a van bound for Jackson, Miss., he had high hopes for a new life. For ten years Charlie has made it without the use of arms or legs.

In the span of three days, that changed as Orthotic & Prosthetic technicians at Methodist Rehabilitation Center’s east campus worked around the clock to design, construct and fit artificial arms and legs for Charlie.

Before he left for home on Saturday morning, Charlie was doing what had been thought impossible. With his new artificial legs he was walking with a walker and using the fingers on his new hands to pass a bottle of lotion back and forth

At age five, he contracted meningococcemia, a rare, devastating disease that affects one in 100,000 and mostly children ages five and under. Doctors told Charlie’s parents if he survived the disease, he would probably be brain damaged as well as blind, deaf and lose his arms and legs. Those same doctors gave Charlie a 3 percent chance of survival.

“They asked us if we wanted to hold him until he died,” recalled his mother, Cherry. “We just told them that wasn’t our decision and to do what they could and God would decide for Charlie.”

Charlie did lose his legs above the knee and his arms below the elbows. But that hasn’t stopped him from being an excellent student and having an active childhood. At eight, he received a kidney transplant, but that kidney failed leaving Charlie once again on the waiting list for a kidney transplant at Vanderbilt University Medical Center.

Even with the addition of a dialysis machine to his life, Charlie, though often fatigued, still keeps a positive attitude and leads an active life, said Cherry Rogers. “When other children ask him about his limbs, he just smiles and tells them he lost a fight with an alligator,” she said.

In fact, it was Charlie’s positive attitude that helped make a difference for someone else seven years ago. When Charlie’s cousin Brad Kennedy lost his leg at the age of 17 in a car accident, Charlie went to cheer him up.

“It was October. I was in the hospital and they had just amputated my leg,” recalled Kennedy. “I was down and depressed and feeling sorry for myself. Charlie came in with no hands and no legs and he was laughing and joking around. He was just a child but he had such a wonderful attitude, I had to feel better.”

Kennedy felt so much better that he pursued a career designing prosthetic limbs and now works in the same Methodist Rehab department that helped build Charlie’s new limbs.

“It’s so exciting to be able to help him after what he did for me,” Kennedy said. “When they got here, they were excited and we were excited. It’s been a lot of hard work, but it’s been fun.”

It’s unusual for someone who has lost their legs above the knee to pick up walking with prosthetic legs quickly because of the lost balance, Kennedy said of his cousin. But Charlie is learning fast.

“He’s an amazing kid,” said Rick Psonack, director of Orthotics and Prosthetics at Methodist Rehab. “He’s flexible. He jumps on the trampoline, goes up stairs and plays video games. He’s going to pick this up and master it just like he would a video game.”

Psonack and other technicians outfitted Charlie with six limbs in all. They made him two legs, two electric arms and two sports arms – one for baseball and one for golf.

Charlie will also be fitted with a prototype wrist that has 360-degree movement. And prosthetics designers at Methodist Rehab have been working on solving two of Charlie’s special requests – a golf arm and a baseball arm.

“We’ve been working on a device to help him catch a ball and throw it back. It looks kind of like a Lacrosse stick with a curved section for catching and it lets him throw the ball back also,” said Psonack. “We’re also working on building him a golfing arm and he’s able to hit the ball some with the prototype we finished.”

Being able to catch and throw will make a big impact with Charlie, said Cherry Rogers. “If someone is throwing a ball at you and you don’t have hands, there’s going to be some hesitation. This is going to give him the ability to catch it without feeling like the ball’s going to hit him. He’ll be able to catch it and throw it back.”

Seeing patients do things they’ve always wanted after getting prosthetics makes it worthwhile, Psonack said. “Kids like Charlie. They’re the reason we do what we do.”