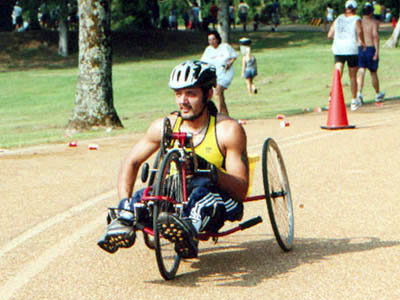 SARDIS LAKE, Miss.—When Jackson resident Josh Sharpe looked out over the water at Sardis Lake and prepared to race in the Dragonfly Triathlon, he faced a greater challenge than the other few hundred competitors.

Sharpe, 26, who lost the use of his legs in a 1994 car accident, did what few other physically challenged athletes have done—he competed in all three phases of the triathlon. Sharpe had to rely on his arms alone to pull him through the half-mile swim and again to power a hand cycle over the 18 mile bike course before switching to a specially designed wheelchair for the four mile run.

Sharpe and several other former Methodist Rehabilitation Center patients made up four relay teams of physically challenged athletes from the Jackson hospital’s therapeutic recreation program at the annual event.

“This is the fifth time our triathlon teams have participated in the Dragonfly race,” said therapeutic recreation director Ginny Boydston. “But this time Josh’s determination and competitiveness made it even more significant as he competed by himself in all three parts of the race.”

Sharpe and Tupelo resident Randy Lavender and Hattiesburg resident Carlos Ladner worked as a team in the Heatwave Triathlon in Ridgeland in June. They were all at Sardis Lake, but this time Sharpe was on his on.

Active in rock climbing, wheelchair tennis, scuba diving, and as a student of naval aviation history, Sharpe first fell for hand cycling when he saw the machine in an issue of Sports ‘N Spokes, a magazine devoted to physically challenged athletes. Hand cycles have three wheels, a seat and a crank that looks just like a bicycle’s chain rings. Instead of using legs, the hand cyclist “pedals” with the arms.

“I loved to ride BMX bikes before my accident so this was just a natural fit for me,” Sharpe said. “I did a 65 mile ride in April for training. Lately, I’ve cut back to 20-25 miles each ride to get ready for the race.”

For Sharpe the hardest part of the triathlon was the swim.

“A lot of able-bodied athletes say the swimming portion of the race is their least favorite part of the event,” said Boydston. “And it is even harder when you can’t kick your legs to help stay horizontal in the water, but Josh is a strong athlete with a winning attitude and an inspiration to all of us. He stepped up to the challenge, trained hard for all his events and accomplished his goals.”

Boydston said she plans to offer new challenges to the athletes she works with. “We’re going to branch out and keep doing new things and looking for new opportunities,” she said. “We have a ‘can do’ attitude about everything and it’s a lot of fun to bring together able-bodied and disabled athletes for the same cause. And we’re always looking for new athletes.”