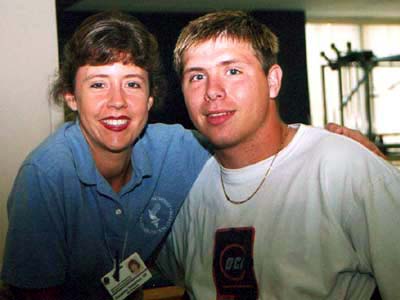 The 18 year-old senior at East Central High School had several broken bones and a tube placed in his throat to alleviate internal bleeding after a life-threatening car accident near Lucedale.

Havard, a tight end on the football team, also suffered a spinal cord injury that left him paralyzed from the chest down.

“He had lost so much weight,” said Susanne Yelverton, a physical therapist at Methodist Rehabilitation Center where Havard recovered. Yelverton and other therapists worked with a team of physicians, researchers and nurses in the Jackson hospital’s spinal cord injury program to help him regain his independence.

Today, the 19 year-old Havard won’t let anything stop him from being an active, involved, teen just like his friends. Not even his wheelchair.

The accident, which changed his life in many ways, has also given him a sense of direction. When he starts college in January, he’ll be aiming for a career in physical therapy.

“The people at Methodist Rehab did so much for me and helped me get on with my life,” Havard said. “I’d love to be able to help others who are going through this just as the therapists here helped me.”

Seeing his progress has been exciting for the Methodist Rehab staff.

“He had a huge recovery,” said Mark Bowden, therapy manager for the hospital’s spinal cord injury program. “When he first came here, he had a fractured right arm and trouble with dizziness. He had lost a lot of strength and needed respiratory therapy every three hours.”

The accident that left Havard in a wheelchair and left him injured physically and emotionally was no small collision. The truck he was riding in left the road and struck a culvert and flipped 10 to 15 times before stopping. Havard’s friend, Ray Ruiz, was driving and was killed in the crash.

Therapy was slow at first, said Yelverton. “He was scared after the wreck and wasn’t ready for rehabilitation yet.”

Several weeks after arriving at Methodist Rehab, Havard and his family were able to take a break and go home to rest. When he returned, his weight was up and he was ready to work.

“He came back focused,” said his occupational therapist, Leigh Ann Hunt. “You could tell he wanted to do things for himself again I think seeing his friends and being with his family at home helped him realize what he needed to accomplish.”

Havard threw himself into the specialized therapy program designed to help him obtain the highest level of independence possible. He concentrated on what he had to do to get better and was soon taking the hospital’s driver’s re-training course and driving on his own again.

“We were so scared and worried about James after the accident,” said Havard’s father, Edward. “I just know if we hadn’t brought him here, he wouldn’t have made it.”

Shortly after being released from Methodist Rehab, Havard drove to Jackson from Lucedale to practice with the hospital’s quad rugby team. “I’m not going to let a wheelchair keep me from doing the things I did before the accident, including traveling,” he said.

That attitude has endeared Havard to the therapists who worked with him at Methodist Rehab.

“James inspired a lot of us,” Bowden said. “He was determined to recover, to rebuild his life and to set goals for the future. We’re all very proud of him and we’re proud that he wants to be a therapist, too.”