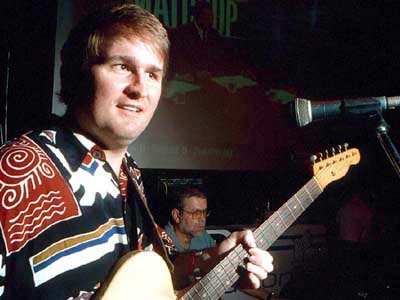 JACKSON, Miss.—For Chris Gill, playing with his band, Gillmore, before a rowdy crowd is a pleasure that was almost lost forever. On a Tuesday afternoon last April, the 34 year-old Ridgeland man was driving to a Jackson restaurant to perform when an 18 wheeler struck his car. He never made it to the show.

Although injuries like Gill’s account for a large percentage of trauma cases in the U.S., most Americans are largely unaware of what a traumatic brain injury (TBI) is and how it’s treated even though physicians say awareness is the key to prevention. October is Brain Injury Awareness Month.

“More Americans will suffer brain injuries this year than will be diagnosed with HIV/AIDS, breast cancer and multiple sclerosis combined,” said Dr. Mark Sherer, director of the neuropsychology department at Methodist Rehab and the principal investigator of two TBI studies at the Jackson hospital. “It is essential that people do all they can to protect themselves to avoid these often life-changing injuries.”

A traumatic brain injury occurs when an outside physical force impacts the head and causes damage to the brain. This damage results in a diminished or altered state of consciousness for varying lengths of time and impairment in thinking, physical movement or behavior.

Nationwide, the Centers for Disease Control and Prevention estimate at least 1.5 million Americans will suffer a TBI this year. There are 5.3 million Americans living with a disability due to a brain injury and CDC estimates an annual cost to society of $48.3 billion.

“Research shows that safety measures such as wearing a bicycle helmet and using seat belts can prevent 85 percent of brain injuries,” said Lauren Fairburn, coordinator of Think First, Methodist Rehab’s injury prevention program. “Throughout the year we work with police officers, firefighters, paramedics and other health care workers all over Mississippi to encourage young children and teens to always think first about safety and injury prevention.”

The Mississippi State Health Department estimates 2,000 Mississippian’s will suffer brain injuries this year and more than 800 will die from them. Nationwide, more than 50,000 Americans die of brain injuries each year and vehicle crashes like Gill’s are the leading cause, with falls a close second.

When Gill arrived at Methodist Rehab, he couldn’t walk and had sustained some cognitive damage from the accident. Some of the muscles in his face wouldn’t respond and left him with an altered appearance.

Therapy, focused on his physical recovery, helped Gill. “He has a lot of pain left from the broken bones and other injuries suffered in the wreck,” said physical therapist Connie Moore, who treats Gill in outpatient rehabilitation at the hospital’s east campus in Flowood. Gill’s muscles had atrophied while he was recovering from the wreck leaving him weaker overall.

“By increasing his strength through therapy, we will be able to make his movements less painful,” she added. “Making him as pain-free as possible is important to getting him back to the way he was before the accident.”

For the first two months following the accident, Gill needed a wheelchair to get around. “When I first started trying to walk again it was so hard,” Gill said. “I was like a toddler trying to learn it all over again.”

During rehabilitation, therapists have used treadmill gait therapy to improve Gill’s walking ability. With this therapy, a harness and system of pulleys is used to reduce some of the patient’s weight allowing him to walk on the treadmill without putting full force on body.

“Hopefully, he’ll be able to walk without his cane and without pain,” Moore said.

Gill has already accomplished a lot. After weeks of working with the hospital’s brain injury team, he’s already back at his job and playing gigs again.

“We’re doing a lot of shows already,” he said. “I love to play, but I’m trying to take it easy right now.”

During his inpatient stay at Methodist Rehab, Gill penned a new song about his injury and recovery. “It’s called the hospital blues,” he said with a sheepish smile.

“It is so good,” said his wife, Laura. “It tells the whole story about what he’s been through and the rehab. I’ve been trying to get him to record it.”