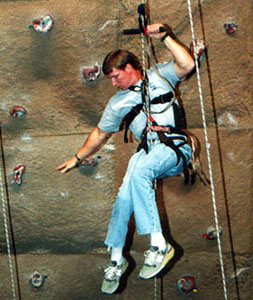 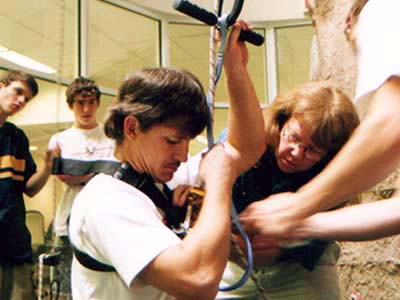 David Smith, center, and Ginny Boydston, right, adjust the harness and ropes he'll use to climb a three-story rock wall. Smith, 34, and other physically-challenged athletes are participating in a rock climbing program offered by Methodist Rehabilitation Center.

CLINTON, Miss.–Ever since a 1986 motorcycle accident left David Smith with a spinal cord injury, he’s had to rely on a wheelchair to get around. But these days he’s leaving the chair behind and setting his sights a lot higher.

When the 34 year-old Pearl resident isn’t driving his new Kenworth 18-wheeler cross-country, he’s scaling a three-story rock wall and thinking of the day he’ll be outdoors climbing up a real rock.

“When I saw Mark on television, I thought if he can do that, then other people with disabilities might enjoy rock climbing, too,” said Boydston. A short time later she secured a time for participants to climb the rock wall at the Baptist Healthplex on the campus of Mississippi College.

David Smith was one of the first to sign up.

“I said ‘Sure. I’ll be your guinea pig,’” he recalls telling Boydston.

Boydston contacted Wellman and they talked about the equipment she would need to get the program off the ground.

“We received a grant from the Allstate Foundation that we used to purchase our equipment,” she said. “We couldn’t have done it without them.”

Disabled climbers use ascending gear with support harnesses to keep their bodies upright. “Safety is the most important thing,” Boydston said. “We want them to have fun, but they have to be safe doing it.”

Climbing is different from other sports for the physically challenged, Boydston said. For one thing, its one of the few sports where a disabled person is able to completely leave the wheelchair behind.

“Even in rugby, tennis and basketball, you’re still in a wheelchair,” Boydston said. “But here, from that first pull, you’re in the air and on your own,” she added.

It’s a boon to people with disabilities that they have so many choices for recreation in Mississippi, said Carlos Ladner of Hattiesburg. Ladner, 20, competes often in wheelchair racing, hand cycling and fishing tournaments.

“I haven’t done the rock climbing yet, but it looks like a lot of fun,” he said. “The great thing is the variety. If you don’t like water skiing, you can rock climb. If you don’t like that, there’s fishing and lots of other programs. With that kind of variety, there’s no excuse for people with disabilities to not be active.”

“I love climbing,” said Josh Sharpe, 26 of Jackson. “It takes some getting used to. But once you’re comfortable with your gear and feel safe, it’s a lot of fun.”

Sharpe, who injured his spinal cord in a car accident, leads an active life that includes triathlons, scuba diving and hand cycling. Since seeing it done in Colorado by other people with disabilities, he’s been hooked on rock-climbing, he said.

Smith, who is about as active as they come, has always supported activities for the disabled. Already a wheelchair racer, water skier, hand-cyclist, tennis and basketball player, Smith hopes that by climbing he can show others with disabilities something they can do themselves.

But inspiring others isn’t anything new to Smith, he said. “When I was a patient at Methodist Rehab, I couldn’t stand not doing anything or seeing others sitting around idle either,” he recalled. “I’d tie someone else’s chair onto mine and drag them outside so they could get some air and be active.”

Prior to his injury, Smith enjoyed driving cross-country hauling supplies in his 18-wheeler. Now, he hopes to make those long hauls again in his new truck. “I drove 11 years before my injury. I’ve been all around the world at least twice and I miss it,” he said. “I can’t wait to get back on the road.”

The rock-climbing program came together when Boydston got in touch with Jeremy Johnson at the Healthplex. Johnson began climbing in 1997 when the Healthplex was completed. At the time, the rock-climbing wall was still incomplete and Johnson helped finish it. He never looked back, he said.

“Every day has been a learning experience,” said the 21-year-old Mississippi College student.

That’s never been truer than when Smith rolled into the gym and said he wanted to climb the three-story-high wall.

“It’s really impressive to see people like David and Josh come in,” said Johnson. “I’d heard the stories about paralyzed climbers before and I can tell when I’m working with them, it’s not a question of if they can do it, but of whether I can make it the most positive and safe experience possible for them.”

Climbing can lead to an active lifestyle, Boydston said. “Even if they don’t like it, the people who participate are going to meet climbers and other people who can turn them on to other activities that they will like. The social aspects of it are always great for people with disabilities.”

The priorities are safety and fun, Johnson added. “As long as they feel they’re getting something positive out of it, then I’m excited about helping,” he said. “Even though they do it a little different, David and Josh are now part of the climbing world.”