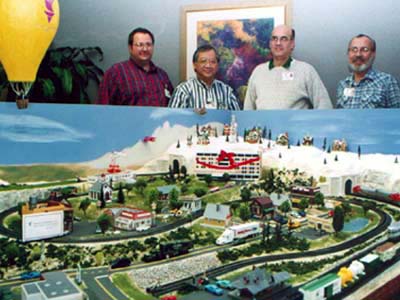 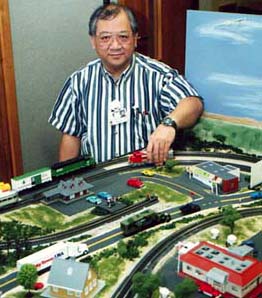 Charles Moy places an engine on the tracks of Methodist Rehabilitation Center's model train display. Moy, of Jackson, and his co-workers in the hospital's biomedical services department spend hundreds of hours building the exhibit each Christmas for patients, staff and visitors to enjoy.

JACKSON, Miss.—What began as a couple of buildings and a train set has become a full-fledged holiday tradition at Methodist Rehabilitation Center.

In the Jackson hospital’s second floor Atrium Mall the sounds of an old locomotive pulling out of the depot filled with holiday passengers signals the approach of Christmas.

Two trains and a trolley covering 80 feet of track criss-cross against a snowy Christmas backdrop as planes and Methodist Rehab’s hot air balloon fly overhead while Santa Claus and his reindeer encircle a lifelike styrofoam model of the Jackson hospital.

“We modify it a little each year,” said Charles Moy of Jackson, a member of the Methodist Rehab biomedical services staff that maintains the train exhibit. This is the fifth year the exhibit has been displayed.

It started as a fun little project we did on the side, said Greg Lauten of Madison. “Our boss at the time thought it would be a good idea to give the patients and staff something fun to look at. We didn’t know what we were getting into,” he said.

More than 300 man-hours of labor went into the current model, Lauten said. “And you’ve got to figure an extra 100 hours each year in upkeep and maintenance to make it run smoothly,” he added.

The train runs nine hours a day, Monday through Friday. Hundreds stop to see it on their way through the Atrium Mall to and from the neighboring University of Mississippi Medical Center.

The trains are completely automated, explains Moy. “We can’t have a full time engineer monitor it all the time so everything has to work on its own. The trains are self-maintained and the planes and Santa operate by themselves,” he said.

The planes were a particular challenge for Moy. “We spent days working on them,” he said. “We hollowed them out and built a little engine that is powered by old pager batteries. Every few days, we have to put a new one in.”

Lauten used the motor from an old copier machine to make Santa Claus fly around the hospital. Also, each building lights up, he added.

The replica of Methodist Rehab was hand carved out of styrofoam by Bob Hirko of Brandon, the head of the biomedical department.

New this year is a sound system for the train. “I took some speakers and a sound effects CD put on continuous loop to make the ‘chugga-chugga’ sounds,” Moy explained.

The biomed staff is already cooking up ideas for next year’s model.

“We’ve already been looking at having crossing guards with working lights and adding more buildings,” Moy said. “And I also want to make the balloon fly around the scene instead of hanging in one place. It’s fun to watch it happen.”

Everyone loves the train, said Lauten. “It doesn’t matter if they’re seven or 75, people are always thanking us for building the train. And we love doing it. It helps everyone get into the Christmas spirit.”