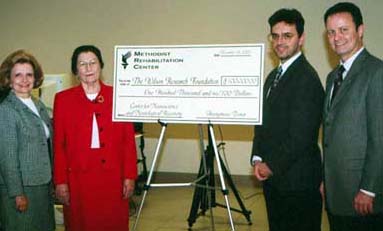 JACKSON, Miss.—The Wilson Research Foundation has received a $100,000 donation from an anonymous donor to fund research at the Center for Neuroscience and Neurological Recovery at Methodist Rehabilitation Center.

The donation will be given over a five-year period in installments of $20,000 each year.

“This money will enable CNNR researchers to acquire new equipment and broaden their research efforts,” said CNNR director Dr. Dobrivoje Stokic. “Our research team is dedicated to restoring function and improving the quality of life for spinal cord and brain-injured patients. This generous donation will have a significant impact on our work.”

The anonymous donor cited Methodist Rehab’s strong commitment to research and its capability to quickly transfer research findings to a patient's bed-side as a reason for the gift.

The donor hopes the contribution will raise awareness of the need for funding this kind of research and encourage others to give as well.

“This donation will have a meaningful and long-lasting impact,” said Mark Adams, president and CEO of Methodist Rehab. “Our researchers are working to bridge the gap between biomedical discoveries and their clinical application, bringing laboratory research closer and more quickly to our patients.”

Researchers at CNNR work to improve recovery from spinal cord and brain injuries as well as other disorders of the central nervous system. They hope that through applied research, they will one day be able to cure these disorders completely.

“The potential for making great medical advancements is here and that is due in large part to the visionary leadership of Earl Wilson who worked to establish this state-of-the-art neuroscience center and helped recruit a team of dedicated researchers from all over the world,” Adams said.

Earl R. Wilson, who died in September 2000, was one of Methodist Rehab’s founders and chairman of its board for more than 25 years. The Wilson Research Foundation, established in 1989 with a grant from the H.F. McCarty Jr. Family Foundation, is named for Wilson and his wife, Martha Lyles Wilson, and honors their lifelong commitment to people with disabilities.