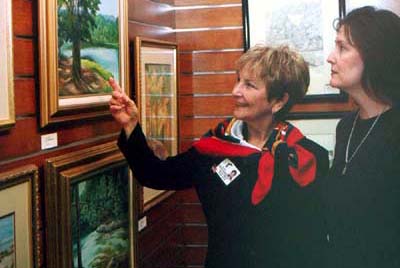 Sandra Walker , left, director of volunteer services at Methodist Rehabilitation Center, and Terri McKie, manager of the gift shop at the Jackson hospital, look at a painting by award winning artist Joy Jones.

JACKSON, Miss.—Joy Jones says she had always wanted to be an artist. But a bout with a rare connective tissue disorder almost took from her the means to be creative. Almost.

Until February, the works of Jones, an award-winning artist, are on display at Methodist Rehabilitation Center’s art gallery in the gift shop in its Atrium Mall. Nine of her vibrantly colored pieces show off her skills using oils, pastels and watercolors.

Jones, of Pearl, is a late-bloomer. She set out to learn to paint after retirement which gave her the time to really enjoy it. “I took lessons from Dianne Norman and I’ve been painting for six years now,” she said.

Jones suffers from polymyositis, which is characterized by muscle inflammation and degeneration. About five out of 10,000 are affected, but women are twice as likely as men to contract the disorder.

The disorder has left Jones unable to do many ordinary tasks, but she still paints.

“I love it. It gives me an opportunity to take my mind off of the things I can’t do and let’s me focus on what I can do,” she said.

She’s been successful, too. She’s won awards and many of her works have been purchased and now hang in prominent homes and businesses.

“It’s been therapeutic for her,” said Terri McKie of Madison, manager of the gift shop and art gallery at Methodist Rehab. “And I think it’s also helped relieve some pain since she’s been painting. Her works are beautiful. People are always stopping by to look at her paintings while walking through the Atrium Mall.”

Methodist Rehab’s art gallery was designed for the exhibition and sale of the works of artists who have suffered disabling injuries. “It’s important that we recognize the accomplishments of our disabled artists and help show others with disabilities that there is a whole world of opportunity out there for them. Anyone can be an artist,” McKie added.

Each year, Methodist Rehab teams up with Goodwill Industries to present an art exhibit comprised of more than 200 artists from around Mississippi. For two months, their works hang in the halls of Methodist Rehab until a judging and awards ceremony is held in June.

After her disability struck, Jones became a Methodist Rehab volunteer. During the week, she calls other patients to remind them of their appointments.

“She is an excellent painter and volunteer,” said Sandra Walker of Madison, director of volunteer services at Methodist Rehab. “And she has a sweet attitude and a wonderful smile. Even when she’s in pain, she has a way of brightening people’s day.”