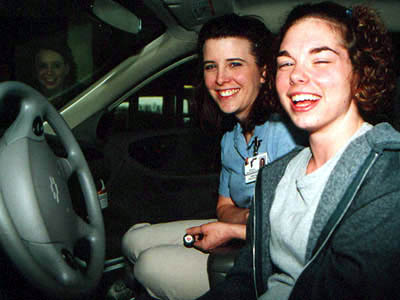 JACKSON, Miss.—Heather Turner doesn’t back down from challenges in her life.

But when the 22 year-old student’s car broke down leaving her with no way to commute between school, home and Methodist Rehabilitation Center where she has been receiving treatment for an allergic reaction to latex, she didn’t know what she would do.

That’s when a group of Cleveland businessmen entered the picture.

As Turner, of Ridgeland, walked out the sliding doors of Methodist Rehab after an afternoon therapy session, tears streamed down her face. A new 2002 Chevrolet Malibu sat in front of the Jackson hospital with her name on it.

Asking to remain anonymous, the businessmen said they had heard Turner’s story and wanted to help.

Turner, who has cerebral palsy and checked herself out of an orphanage at age 18 to go to school at Holmes Community College, was speechless.

“Everyone was so thrilled and happy for her,” said Cameron Huff, Turner’s physical therapist in the hospital’s spinal cord injury program. “When we found out, we were all crying with her.”

Cerebral palsy is characterized by a loss of movement or other nerve functions. About three people in a 1,000 have the disorder which is caused by an injury to the brain that occurs during fetal development or near the time of birth.
Turner was admitted to Methodist Rehab in November after her reaction to latex caused her to go into shock. The spasticity from her CP had increased, said Huff. Spasticity is a common side effect associated with many spinal cord disorders that causes the patient to temporarily lose muscle control over a part of their body.

“We worked on getting her stronger and regaining her range of motion,” said Heather Maloney, a physical therapist who also worked with Turner. Turner returns to Methodist Rehab three times a week for therapy.

As a part of her rehabilitation, Turner is participating in the hospital’s treadmill gait training. The treadmill—which uses a harness, pulleys and a pneumatic system to support a patient’s weight—helps in several ways. By taking away some of the patient’s weight, the machine allows trainers to induce a stepping motion.

Prior to her latex reaction, Turner could walk. But the shock made her dependent on her wheelchair before weeks of treadmill training helped her to walk again.

Turner hopes to work with hospitalized children as a child life specialist after earning a degree in psychology.

“She’s a go-getter,” said Huff. “She is so determined, none of us doubt she’s going to achieve her goals.” In the meantime, the car she received will be put to good use.