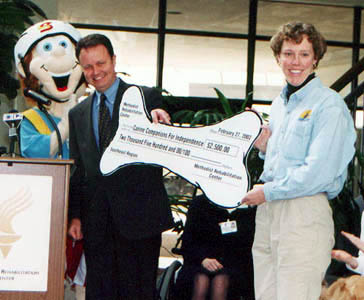 Mark Adams, left, president and CEO of Methodist Rehab, presents at $2,500 check to Linda Cleveland, board president of Canine Companions for Independence. 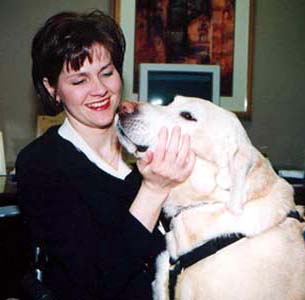 JACKSON, Miss.—A Jackson hospital is encouraging Mississippians to support an organization that raises and trains dogs to assist the disabled.

Methodist Rehabilitation Center will present a $2,500 bone-shaped check to the Florida-based Canine Companions for Independence (CCI) Wednesday, Feb. 27, at 10 a.m. in the hospital’s two story Atrium Mall. That money and other donations made by Mississippians ranging from $250 to $5,000 will be matched dollar-for-dollar by the Edyth Bush Charitable Foundation.

“This is a wonderful way for us to support an organization that does so much for disabled Mississippians,” said Mark Adams, president and CEO of Methodist Rehab. “The dogs they provide give those with disabilities an opportunity to live independent lives. We hope that others in Mississippi will step forward and donate to this worthwhile cause.”

Methodist Rehab is home to Fair, the state’s only facility dog. The four-year-old golden retriever was trained by CCI in Santa Rosa, Calif., to work with patients in Mississippi who have disabilities or limitations. He is one of only five facility dogs working in the organization’s eight-state Southeast region.

“Fair went through months of basic training and then had six months of advanced training before he came to Methodist Rehab,” said Erin Pryor, Fair’s handler and a physical therapist in the hospital’s brain injury program.

He works with patients on balance and control and helps some feel more comfortable after sustaining serious injuries. “He’s a spirit lifter for the patients,” Pryor added. “He makes everyone smile.”

“These dogs can bring a whole new level of independence to a person,” says Linda Cleveland, board president of the southeastern division of CCI. Cleveland believes in the program so strongly, she’s raised seven puppies on her own to be trained as canine companions and given to people with disabilities.

“It’s one of the toughest things in the world to give one up, but when you see the impact they make, it’s all worth it,” she said. “These dogs change people’s lives.”

To some it may not seem like picking up a dropped item is that big a deal, Cleveland said. “But helping with the little things often helps someone in a wheelchair gain the confidence to do big things. I get Christmas cards all the time from people who I’ve raised dogs for telling me how they’re out doing things they never thought they’d be able to after their injury. It’s the dogs who give them that confidence.”

“Seeing Fair everyday and the impact he has on our patients made me interested in the program,” said Oyarce. “It’s so rewarding to work with the dog knowing the part he’ll play in someone’s life one day.”

For Tammy Voynik, her dog has lived up to his billing as man’s best friend. After a car accident robbed her of the use of her legs in high school, Voynik faced the uncomfortable challenge of adjusting to college life in a wheelchair. But by the time she entered law school, her friend and compatriot, Terzian, a mixed Labrador and golden retriever puppy, was making everything easier.

He soon took over the duties of picking things up, pulling her wheelchair up steep inclines and even opening doors.

The first time she saw a service dog, she knew it was exactly what she needed, she said.
“I was at the University of Southern Mississippi when I met a lady who had a dog from Canine Companions,” Voynik recalled. “The next day I called and was eventually put on a waiting list.”

Terzian was matched with her during a visit to a Canine Companion training center in San Diego. “When I first got him 1995, he did absolutely everything with me. He was always at my side. When I dropped something and it was late at night, he could get it without me having to call the neighbors,” she said.

When Voynik goes grocery shopping, she pushes the buggy while Terzian pulls her along.

Now that she’s married and has a husband, Voynik doesn’t need Terzian for as many things, but recently he proved his value all over again.

“When I was pregnant, I couldn’t have made it without him,” she said. “Bending over to reach objects was almost impossible and he could get things for me and help me get around. Even now that Joseph has been born, Terzian still helps me with him.”

Once, when Joseph was reaching for something Tammy didn’t want him to have, she called for Terzian to pick the object up and bring it to her. “He’s just great,” she said.

Now Voynik, an attorney at Methodist Rehab, wants others to know how special these dogs are.
Voynik hopes Methodist Rehab’s donation will increase support and help expand programs and services offered by CCI. The organization provides four types of dogs: skilled companions like Terzian, facility dogs who work in medical environments like Fair, hearing dogs who work with the deaf and assisted service dogs who help individuals who are assisting others, usually children. “It’s a great opportunity to let people know how important service dogs are in the lives of the disabled.”

To make a donation to CCI, call 407-522-3307 or go online to www.caninecompanions.org. CCI is a non-profit organization that is funded by private contributions and receives no government funding. People with physical or developmental disabilities who can demonstrate that a Canine Companion will enhance their independence or their quality of life are eligible to apply. Also eligible are professionals working for organizations that provide physical or mental health care to clients who could benefit from interaction with a facility dog.

The Edyth Bush Charitable Foundation, Inc. of Orlando and Winter Park, Florida, was founded in 1966 by the late Edyth Bush and has disbursed or appropriated over $68 million to various needy charitable, educational, health services and cultural organizations since 1973.