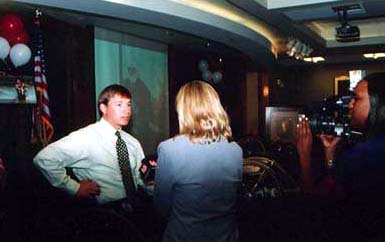 Paralyzed in a car accident in 1994, the 26-year-old Jackson paraplegic just returned from snow skiing in Lake Tahoe. Whether it’s blazing down a slope on specialized skis or racing against other competitors with disabilities on his handcycle, Sharpe has never let his injury disable his spirit.

For Sharpe, competition is about more than winning, it’s about overcoming great odds and achieving personal goals.

“These games show everyone that life doesn’t stop after an injury,” said Sharpe. “Everyone has obstacles in life. It’s just that the obstacles are a little different when you’re in a wheelchair and sometimes a little scarier.”

Sharpe and a room-full of other physically-challenged athletes from around the state gathered at Methodist Rehabilitation Center to celebrate the 2002 Paralympic Winter Games.

The athletes, along with patients and staff, watched coverage of the Salt Lake games on a large, wall-size projection screen in the Jackson hospital’s conference center. The crowd showed their awe of blind downhill skiers, nodded their heads in approval of a skater who kept getting up from falls and cheered when highlights were shown of the U.S. sled hockey team defeating Sweden and Norway.

“These athletes are so impressive and the stories are so captivating,” said Shelia Burnham of Madison. Since being injured in a fall, Burnham has been in a wheelchair but – like Sharpe – she hasn’t let her injury stop her from grabbing life by the horns. She is a regular water-skier and active handcyclist.

“We’ve been watching the Games every day and the athletes are inspirational,” said Burnham. “Sports aren’t the answer to everything, but you can tell that scoring a goal on a hockey sled means more than just helping the team win. It’s also a reminder of how far they’ve come and how much they’ve accomplished.”

During the broadcast, Sharpe and other athletes spoke to current patients about the Games and being involved in sports. Sharpe demonstrated several pieces of equipment used by disabled athletes in Methodist Rehab sports programs including, quad rugby chairs, water skis, racing chairs and handcycles.

“It’s scary to think how many people in wheelchairs just sit around and aren’t active,” said Sharpe. “It’s obviously bad for you physically, but it’s also bad for you mentally. Being out there and doing things like climbing a 30 foot-tall rock wall, gives you the self-confidence to do other things like driving a car or getting a job.”

Over 500 athletes from 30 nations compete in the winter games, with each event featuring athletes with varying degrees of disabilities. The games are held every two years in the weeks following the Winter and Summer Olympics and are roughly one-third the size of the Olympic Games.

Methodist Rehab’s therapeutic recreation department offers spinal cord-injured patients an opportunity to get back in the game by participating in organized sports programs. Patients learn that with special training and adaptive equipment, they can enjoy a variety of athletic activities including water and snow skiing, rock climbing, wheelchair racing, handcycling, scuba diving, fishing, tennis, quad rugby and sledge hockey.