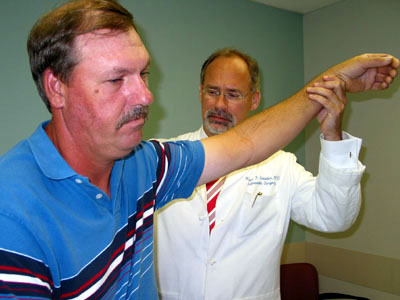 Dr. William Geissler examines Jimmy Downs, a Methodist Rehabilitation Center patient who is the first in the world to be implanted with a new orthopedic plate that may revolutionize the treatment of fractured collarbones thanks to its sleek, s-shaped design.

“It really hugs the curves,” he says.

He’s describing what he has dubbed the Geissler Turbo Plate, a new orthopedic plate that may revolutionize the treatment of fractured collarbones thanks to its sleek, s-shaped design.

Jimmy Downs of Carrollton became the first patient in the world to “test drive” the new plate after undergoing implant surgery at Methodist Rehabilitation Center in Jackson on Oct. 31.

“We’re one of the few rehabilitation hospitals in the nation that has a surgery unit, and it’s because we wanted to give our patients immediate access to the latest in surgical advances,” said Mark Adams, president and CEO of Methodist Rehab. “We’re committed to using new technology, as well as developing our own.”

Geissler, professor and chief of arthroscopy and sports medicine at the University of Mississippi Medical Center in Jackson, worked with engineers at implant-maker Acumed to design the titanium plate. It comes in three sizes and features tissue-friendly beveled edges and low-profile screws. It also comes with a special retractor that protects the patient’s arteries and nerves while the screws are being inserted.

Surgeons typically attach plates to broken bones to keep them in place while they heal. But they’ve never worked well on the clavicle because the plate was straight and the bone is curved. Hence, the idea for the Turbo Plate. “There’s been a trend in recent years to pre-contour plates to the shape of the bone,” Geissler said. “We took that trend and applied it to the clavicle, which is an area I have an interest in.”

Geissler predicts a high demand for the plate because the clavicle is one of the most fragile bones of the body. “There’s no muscle to protect it,” he said. So if you fall off your bike or take a blow to the shoulder, the bone can easily snap or crack.

For children, a broken clavicle is seldom a big problem because the fracture usually heals itself. But adult collarbones aren’t so easily repaired.

Since early studies showed poor results from surgically repairing the clavicle, the traditional treatment has been to put a patient’s arm in a sling, explained Geissler. “But when the fracture healed, the shoulder often became significantly displaced. It would be squashed in and lowered and it looked kind of funny. Patients also would have weakness in their shoulder muscles and loss of function. In a recent study, a third of the patients were unhappy with the result.”

Downs certainly fits that category. Three months after breaking a clavicle, scapula, rib and wrist when he was thrown from his truck during a rollover, the 46-year-old carpenter could do little but “lay on the couch and suffer.”

As happens with many patients, Downs’ fracture had healed crookedly, which made him a perfect candidate for the Turbo Plate. “If you have to re-crack the bone to put it back where it belongs, the curved plate helps you line the bone back up,” Geissler said.

Although he knew he was something of a guinea pig, Downs says he had no qualms about being the first person to try the Turbo Plate. “I liked the idea. I love technology,” he said.

He also likes the fact that he’s no longer in severe pain. “Before, I could do nothing with my left arm,” he said. “If I moved it, it felt like the bone was coming through my skin. Now that I’m healed from surgery, it feels pretty good.”

While the new implant solves many problems, it’s not for everyone who has broken their collarbone. “A majority of clavicle fractures will still be treated non-surgically,” Geissler said. The plate will likely be used if a fracture is severely displaced or there are multiple bone fragments or the fragments are pushing on the skin.

Geissler said another scenario would be if a patient has multiple injuries and surgically repairing the clavicle could help speed recovery. “My next case is a young girl who fractured her scapula into the joint. She also has a clavicle fracture and a wrist fracture, so her whole upper extremity is involved. I’m going to fix each of those fractures, so we can speed up rehabilitation. If I just fixed the wrist and the scapula, she would still be fairly limited in the use of her arm from the pain of the clavicle fracture and she wouldn’t be able to participate in therapy.”

Geissler has performed about 14 more implants since Downs’ surgery. Orthopedic surgeons in Biloxi, Hattiesburg and Greenwood also have used the Turbo Plate, and plans are to give it worldwide exposure.

“We are really excited about the product,” Geissler said. “I just got back from meetings in Florida and Japan, where I introduced it to orthopedic surgeons.”