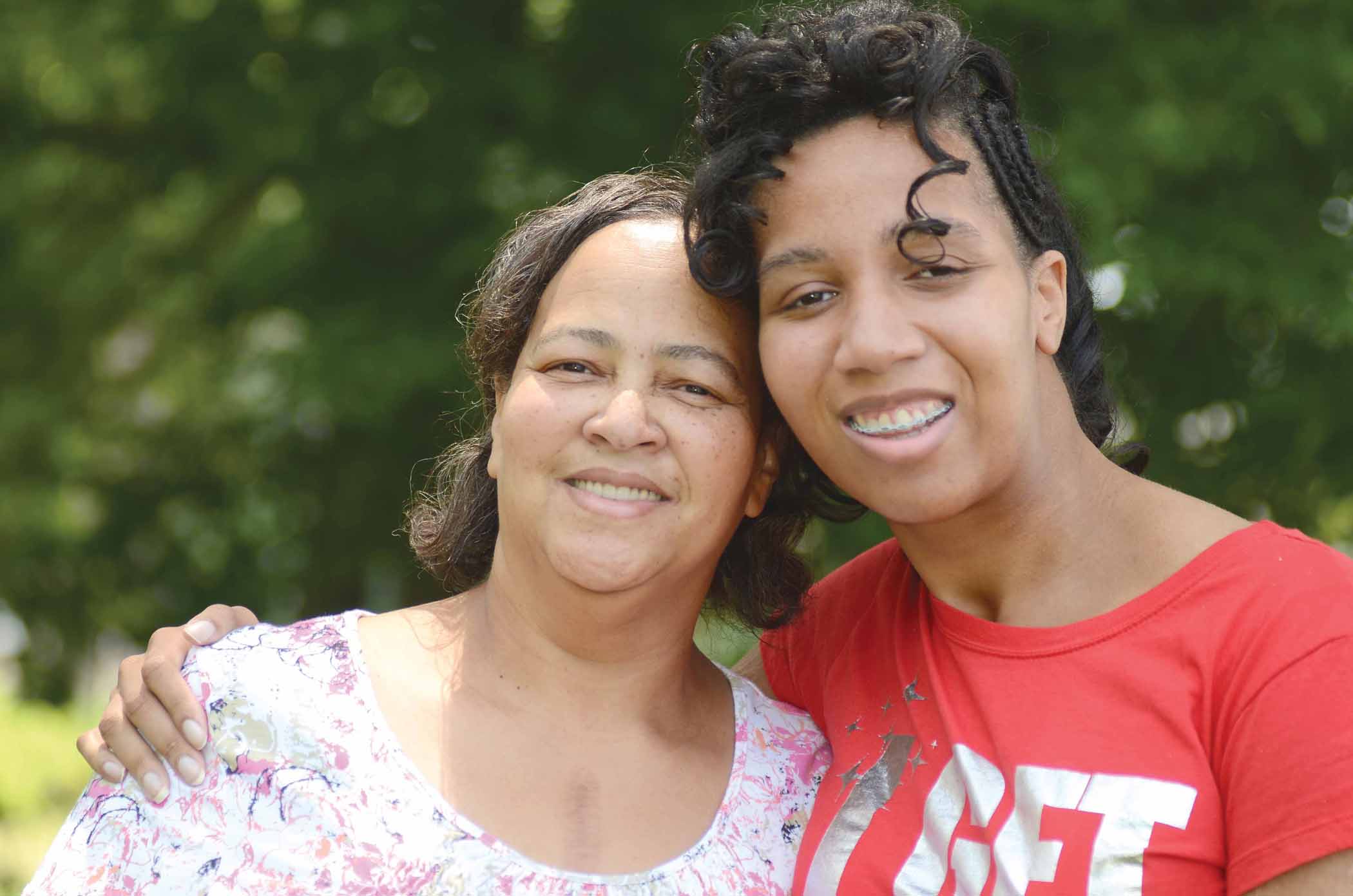 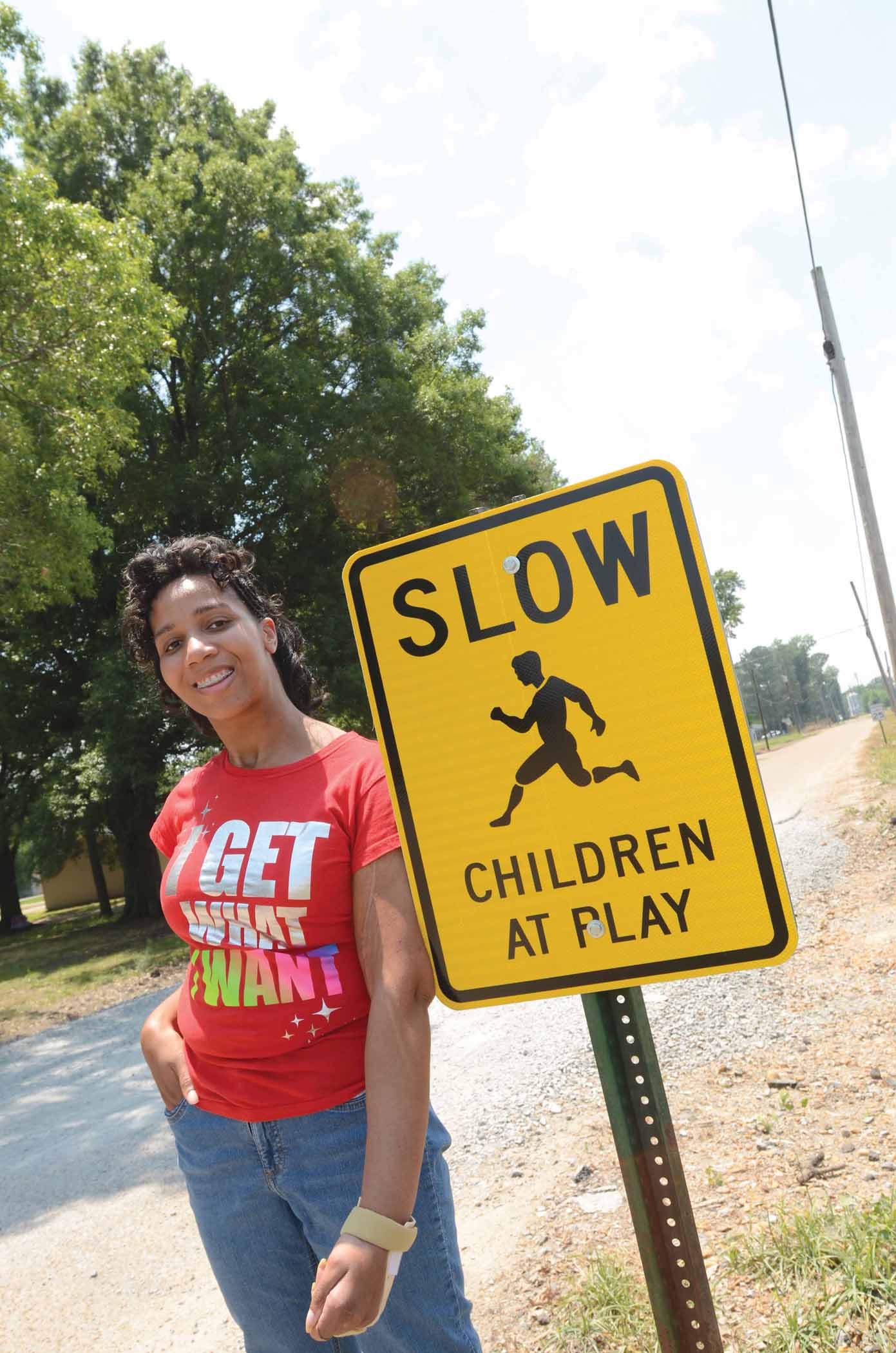 After Kala Harvey was hit by a car as she walked facing traffic along a straight stretch of Main Street in Sledge, a sign was put up to warn motorists to slow down. 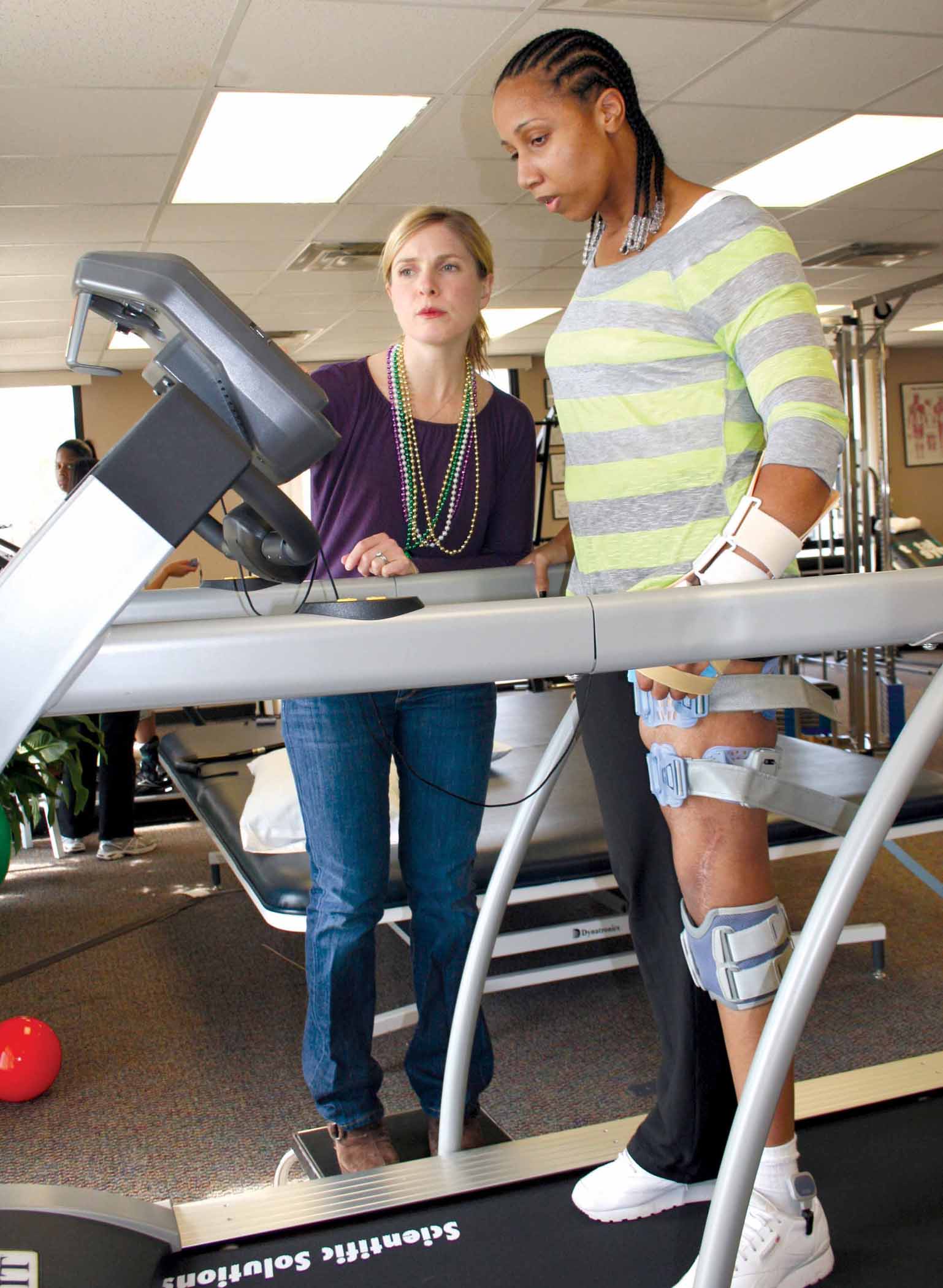 Kala Harvey wears a Bioness L300 Plus neuro-stimulation device on her left leg as she exercises on a treadmill in Quest's therapy gym. Physical therapist Rachel Dear, at left, says the device helps patients overcome problems such as foot drop and knee instability.

Its burgundy cover is battered, and handwritten notes fill the margins of its well-worn pages.

Yet Alma Harvey of Sledge has no plans to replace her beloved King James Bible.

It gave her comfort as her brain-injured daughter Kala clung to life in a Memphis hospital after being struck by a car. And now those notes chronicle a transformation few but Alma had the faith to imagine.

Today, 22-year-old Kala does much more than merely talk. She also tutors kids in her community and has plans to return to college online—a recovery that seemed impossible when trauma surgeons first calculated the severity of her injuries.

"They did a CT scan and MRI and told me they didn’t see any brain activity,” Alma said. “They said if she did survive, she would have no quality of life.”

Still, Alma refused to sign a do-not-resuscitate order or to send the baby of the Harvey family to a nursing home.

“I’ve only believed she was going to get better,” she said. So she insisted Kala be transferred to Methodist Rehabilitation Center’s nationally recognized brain injury program.

“I wanted to see Kala be able to take care of herself, and a lot of people told me I was in denial,” she said. “But I knew Kala needed to come to MRC.

“When we got there, we found not just doctors, nurses and therapists­—we found an extension of our family. They gave us support every way we needed it—whether it was physical, financial or emotional.”

Not that long ago, Kala’s case might have been considered a lost cause.

“And if you were like Kala—minimally conscious at three months—a lot of people didn’t have much hope,” said Clea Evans, PhD, director of Methodist Rehab’s neuropsychology department.

“Now we are following over 400 brain injury survivors up to 10 years post-injury, and we are seeing the rehab process is much longer. We can see improvements Year 2 to Year 5 post-injury.”

When Kala arrived at Methodist Rehab on Jan. 8, 2009, Alma was told: “There’s always a chance.” But staff didn’t downplay the seriousness of Kala’s injury.

“It was one of the worst brain scans I’ve ever seen,” said Dr. Zoraya Parrilla, a rehabilitation physician for the hospital’s brain injury program. “She had different types of bleeds affecting different parts of the brain and multiple injuries.”

Still, Kala’s inability to talk, sit up, walk or even swallow was not a new challenge for Methodist Rehab’s seasoned brain injury team.

The medical staff and researchers have extensive experience treating the most complex rehab cases, including being part of a recent national study that proved the drug Amantadine can speed the recovery of people with severe brain injuries.

“You could tell she was trying so hard … you sensed something was in there,” said speech therapist Holly Radicioni. “It was just a matter of getting to her.”

To spark a reaction, Radicioni started Kala on a sensory stimulation program. “I had her mother bring CDs she made her senior year of old Aretha Franklin and hip-hop songs,” Radicioni said. “And I used smells a lot with her—coffee grounds, seasonings, dill pickle—not very pleasant ones to see how she would react.”

“The biggest thing that helped her was encouragement from the therapists,” Alma said. “They let her know what she did was special.”

Once Kala exhausted her inpatient potential, she moved back home, where her mother pushed hard to provoke a response.

“It broke my heart, but I would make her mad,” Alma said. “I would say: ‘I’ve got to feed you through a tube, but you’ve got a mouth. You’ve got a brain.’ One day she was so mad, I saw her muscles trying to move.”

A series of firsts followed—swallows, steps and then came the day she croaked out, “Mom.”

“I thought I was dreaming,” Alma said. “I said: ‘Kala, did you call me?’ She said: ‘Yes.’ And I said: ‘Say it again.’ It was like having a little one again saying her first word. It was the best thing I’ve ever heard.”

Kala’s awakening meant she was ready for more inpatient rehab, and Dr. Parrilla was aggressive with her treatment.

“Some people might say: This is what you have, deal with it,” Dr. Parrilla said. “But we took her during her different recovery stages and averted a chronic disability.”

By the time Kala finished at Methodist Rehab, she had been in the hospital twice and undergone therapy at Methodist Outpatient Neurological Rehabilitation and Quest, a community reintegration program that helps brain injury survivors return to school, work or community life.

“She utilized a lot of our interventions,” said K.K. Ramsey, a nurse practitioner who still sees Kala through Methodist Rehab’s outpatient brain injury clinic and spasticity management program. “Whenever I would suggest something, her mother would say: ‘Whatever it takes.’ ”

Kala, too, was willing, volunteering for everything from Botox injections to address crippling muscle stiffness to wearing neuro-stimulation devices to activate weakened nerves and muscles in her left leg.

She even let Methodist Rehab researchers test her walking ability in the hospital’s Motion Analysis and Human Performance Lab, the only one in Mississippi and one of but a few in the Southeast.

“I’m ready to try some more. They can use me as a test dummy,” she jokes.

The quip is classic Kala, say her therapists, who marvel at her sass and optimism after almost four years in therapy.

“I’ve been amazed by her emotional resilience,” Evans said. “She has never had any depression, and she has never been bitter.”

Kala says she even forgave the motorist who very nearly killed her.

A Miracle in the Making

Kala’s accident happened at a time when the 18-year-old had the world on a string. She was a scholarship student at Northwest Community College and was home to celebrate her brother Jerry’s 27th birthday.

Around 6 p.m., she joined her sister Candace and family friend Craig Jefferson for a walk alongside a straight stretch of Main Street in Sledge. Alma said the group was facing traffic and didn’t see a car coming at them from behind until it was too late.

Candace tried to pull her sister to safety, but Kala was hit by the car and thrown onto the windshield. Today, she only remembers “the screams.”

“It carried her past four or five light poles before the driver got on the brakes and it chunked her off the car,” Jefferson said. “The only thing I could think of was: I’ve got to get Mrs. Harvey. I ran through ditches.”

Jefferson drove Alma to the accident scene, where she found Kala crumpled on the street, her head so swollen she was unrecognizable. “The hardest thing was watching her laying there until an ambulance came,” Alma said. “Everyone thought she was dead at the scene.”

So it’s no wonder that hometown folks now consider Kala a miracle in the making.

“One lady walked up to Kala and said: ‘Just rub my back because I know you’ve been blessed,’” Alma said. “She’s touched so many people who don’t even know her. And through it all, the Lord has given Kala her personality back. She has always been a caring person, and she still is.”

Along with her compassion comes a streak of stubbornness that has kept Kala pushing to get back on her feet.

“When I couldn’t walk, that frustrated me the most,” Kala said. “People were looking at my wheelchair, instead of me.”

Initially, staff thought Kala’s knee issues were caused by spasticity, an extreme muscle stiffness that Methodist Rehab often treats through Botox injections or an implantable medication pump filled with anti-spasmodic drugs. But motion lab results indicated spasticity wasn’t the problem, and Kala was referred to a surgeon who removed scar tissue from her knee.

Today, she walks by herself—albeit slowly. And she dreams of running again. Mostly, she wants to return to the promising life she left behind before her injury.

Kala said she made it through by asking God for strength and relying on her mother’s unwavering support. “I think sometimes if not for her, I wouldn’t be where I am,” Kala said.

Kala and her mom also give credit to Methodist Rehab staff, who were willing to work as hard as the Harveys to sustain Kala’s recovery.

“Wherever we were, they met us,” Alma said.

At Kala’s Feb. 16 graduation from Quest, a crowd of caregivers arrived to wish her well. In fact, so many came, the festivities had to be moved to a bigger room.

Kala showed up for the party wearing giant orange sunglasses—a nod, perhaps, to the bright future she has planned. She wants to pursue a career as a kindergarten teacher. And Dear, for one, believes she has the determination to reach her goals. It’s why she suggested the inscription “Congratulations to the Total Package” for Kala’s graduation cake.

“In my years of working with patients with traumatic brain injury, I realized the ones who fare best possess three different things,” Dear explained. “They have the motivation to work hard (because we can be slave drivers), a positive attitude to roll with the punches (because recovery doesn’t come fast) and a support system (family friends and medical team) that will encourage them every step of the way.

“I decided Kala had all three and that made her the total package. I’ve never seen a patient more motivated.