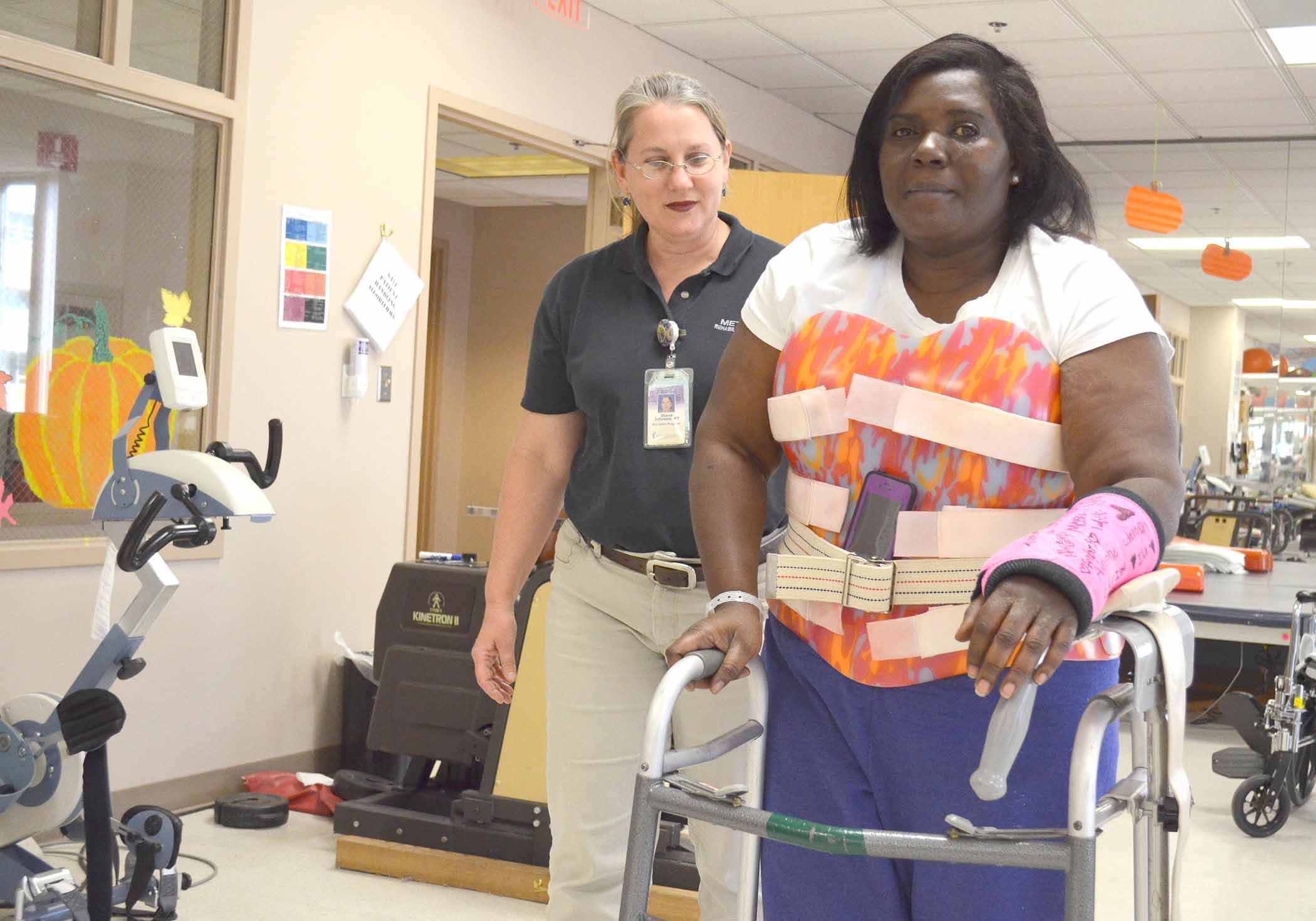 Physical therapist Diane Johnson, left, helps Gladys Berry Jenkins practice walking in the therapy gym of Methodist Rehabilitation Center in Jackson. Jenkins, a nurse and mother of five, is wearing a brace to stabilize spinal fractures suffered in an Oct. 17 tornado. The storm destroyed her mobile home and tossed Jenkins into a field 200 feet away. 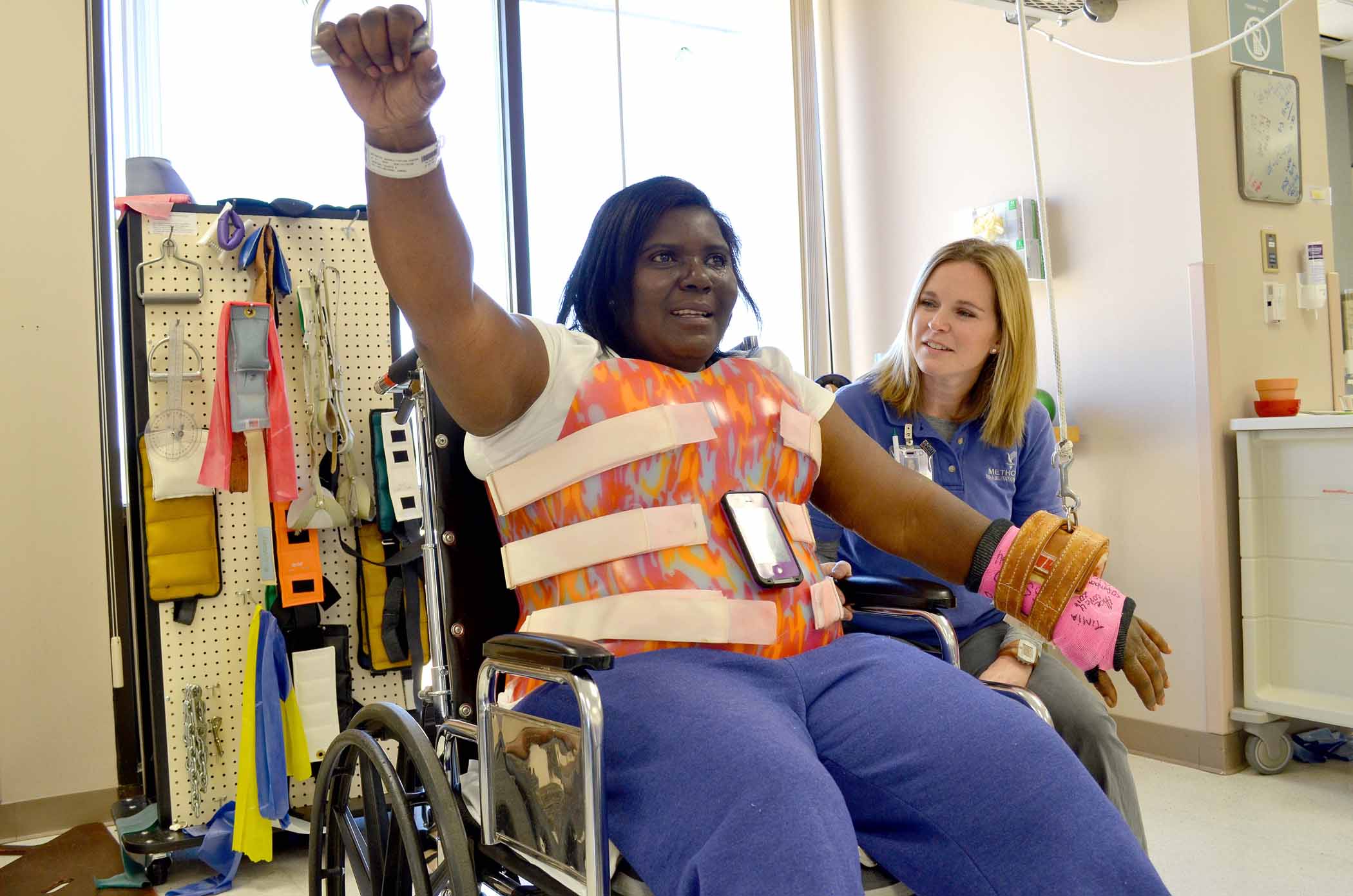 Emily Sandberg, right, an occupational therapist at Methodist Rehabilitation Center in Jackson, leads Gladys Berry Jenkins of Anguilla through a set of exercises to help strengthen her arms

There’s a vacant lot where her home once stood, so holiday homecomings will be bittersweet for Gladys Berry Jenkins of Anguilla this year.

Still, the nurse and mother of five was counting her blessings as she recently readied to leave Methodist Rehabilitation Center in Jackson.

After almost a month in hospitals, she would finally be in the company of her youngest kids—Timia, 11, and Adrienne, 5. And it’s a precious gift considering what the three have been through.

On Oct. 17, a tornado tore into their neighborhood, flinging Jenkins 200 feet and leaving her two daughters standing amid the wreckage of their mobile home. “The house exploded around them,” Jenkins said. Yet the girls managed to make it to a neighbor’s house with only minor injuries.

“It was black dark, and I don’t know how they saw a light to go to the house,” Jenkins said. “It wasn’t nothing but the good Lord. And I am truly blessed. I would have hated to lose the girls or the girls lose me.”

Jenkins’ nephew Avery Cooper found his aunt lying in a field—cold, wet and frantic. “He said I kept asking about the girls,” Jenkins said. But once she was assured of they were all right, she turned her attention to her own safety. “Being a nurse, I knew not to let anybody move me,” she said.

The excruciating pain in her back told Jenkins she might have spinal fractures, and she was right to be cautious. “Tornado victims can sustain extensive trauma, such as brain injuries, spinal cord injuries and skeletal fractures,” said Dr. Sam Grissom, Methodist Rehab’s medical director.

In Jenkins’ case, doctors found multiple fractures in her mid to lower back. “Luckily, there was no compression of her spinal cord, which can cause paralysis,” Dr. Grissom said.

Instead of surgically repairing the breaks, Jenkins’ doctors at the University of Mississippi Medical Center put her in a chest-to-waist brace to stabilize the spine while she naturally heals. They also put a cast on her fractured left forearm and repaired damage to her left cheek bone.

After a week at UMMC, Jenkins transferred to Methodist Rehab to work on regaining her independence. “When I first came over, it was like I couldn’t move,” she said. “And I just hurt.”

Methodist Rehab therapists see many of Mississippi’s worst trauma victims, so they’re well-trained at helping patients work through their pain. And they soon had Jenkins pushing to get better.

“She understood that even if it was painful, she had to do it to get her function back,” said physical therapist Diane Johnson. “And we helped her understand what causes pain and what she can do to control it.”

Jenkins’ therapy team also helped her address the challenges of wearing a hot, confining back brace, even bringing in reinforcements to make it more comfortable. “We called over our prosthetics department to come and trim it,” explained occupational therapist Emily Sandberg. “It was way too big.”

Between the pain of her fractures, the annoyance of the back brace and the destruction of her home, Jenkins had “everything in the world to complain about,” Sandberg said. “And she didn’t complain about anything. It was never poor pitiful me. She just wanted to do well and get better.”

Jenkins said the incentive for all the hard work was “being with my girls.” “I missed seeing them at night before they would go to bed—even listening to them arguing about this and that.”

As she continues to heal and figure out what to do with her future, Jenkins said she and her daughters will live with Alice Lee of Clinton, the girls’ aunt and “the best friend I could have.”

Jenkins said she’s grateful for all the people who have come to her aid, including the staff of Methodist Rehab. “They have really taken care of me,” she said.

Now, her goal is to return to a care-giving role herself. “One day, I’ll be back at work,” she said. “I think I’m going to commute for awhile because I love King’s Daughter Hospital in Yazoo City.”

And the feeling is apparently mutual. “Every day her coworkers were coming in to visit, and that says a lot that they were driving this distance to see her,” Johnson said.

Even with all the support, Jenkins admits she has gotten down at times. A recent visit to her home site was particularly depressing. “It was like there was nothing there,” she said.

Indeed, all that was salvaged was a few bowls, wet clothes and some photos.

But Jenkins says she still has what’s important—a loving family that has drawn close during this time of tragedy. “I’m going to have all my kids with me for the holidays,” she said. “The most important lesson I’ve learned is you have to be thankful for what you’ve got.”