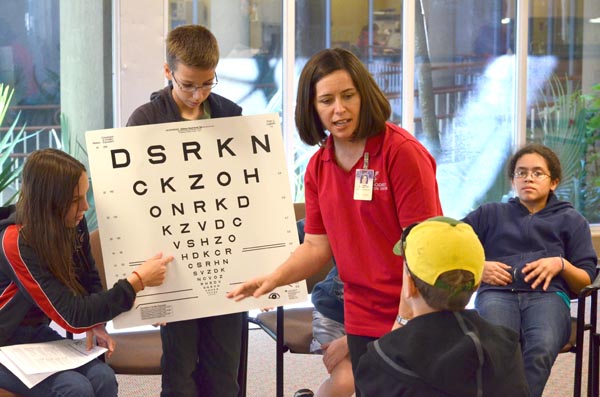 Methodist Rehab physical therapist Susan Geiger demonstrates to the Techno Warriors the tests she performs to determine a patient's balance. 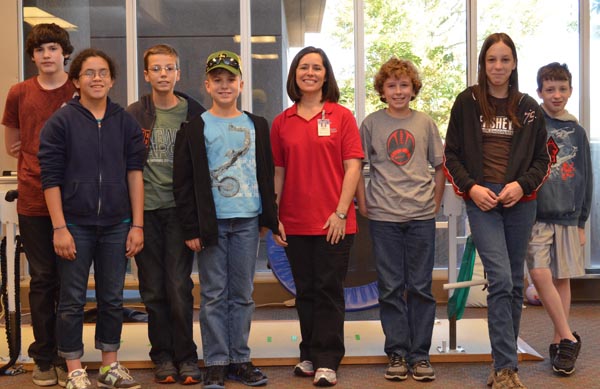 The team is the Techno Warriors, a group of Rankin County-area home schooled students ages 10-14. The team competed in the FIRST Lego League, which tasks students with solving engineering challenges by building LEGO-based robots.

“FIRST Lego League is often called a sport for the mind,” said Teresa Lanum, who along with her husband Jeff Lanum founded Central Mississippi Robotics, a local nonprofit that mentors the team. “It’s not a sport though where the goal is to win—winning is nice, but what you discover along the way is what really matters.”

This year’s theme—Senior Solutions— challenged teams to devise a way to help improve the quality of life for seniors.

“The challenge is different every year, but it’s always something anyone can relate to,” Lanum said. “Like this year’s challenge—who doesn’t know someone that is elderly?”

The program requires teams to consult with a professional to learn more about the challenge topic. Geiger, a physical therapist who works with seniors with balance issues, was asked by team mentor Teresa Lanum to give a presentation to the children.

“That’s what’s great about Methodist Rehab,” Geiger said. “We really like to host students—we are a clinical site for therapy students—but I think our facility also fosters education in the community for anybody who is interested in learning.”

The team wanted to help seniors prevent falls, so Geiger taught them about the human vestibular system, which is located in the inner ear and controls balance and spatial orientation.

“I hoped to clarify some things for them,” Geiger said. “Like what have I encountered that are problems for the elderly in terms of balance?”

And she tested the children’s balance using the same tests she performs on seniors to diagnose their balance issues.

“In using them as the patients throughout the assessment, that gave them a picture of the things that we have to consider when treating the elderly,” Geiger said. “Those are the things they might not have thought about. Like can you stand on one foot? That may be easy for a kid, but it’s more challenging for an older person.”

For their project, the students built a rubber mat that lights up when it senses weight. The illumination helps to prevent falls by guiding seniors who get up in the night to use the restroom. They used amber colored lights, which are less likely to disrupt sleep patterns.

“When they had presented it to me, I thought they did a really great job,” Geiger said. “I was excited for them when they won.”

The team took home the Champion’s Award, one of the most prestigious of the competition, which featured 50 teams and was held in Hattiesburg on Dec. 2.

“They give a number of awards for different areas,” Lanum said. “But to win the Champion’s Award, you have to be good in all areas.”

FIRST Lego League has been growing exponentially in popularity since it began in 1998 with 210 teams nationally. This year over 20,000 teams competed, and schools everywhere are taking notice of what a fun and educational opportunity it is for students.

“When we first moved here, there weren’t any teams,” Lanum said. “Anyone can start one. You just need parents or someone willing to coach it.”

“Interestingly enough, just this week I got an email that they’re going to bring a LEGO robotics pilot program to our school,” said Geiger, who has a daughter who attends First Presbyterian Day School in Jackson.