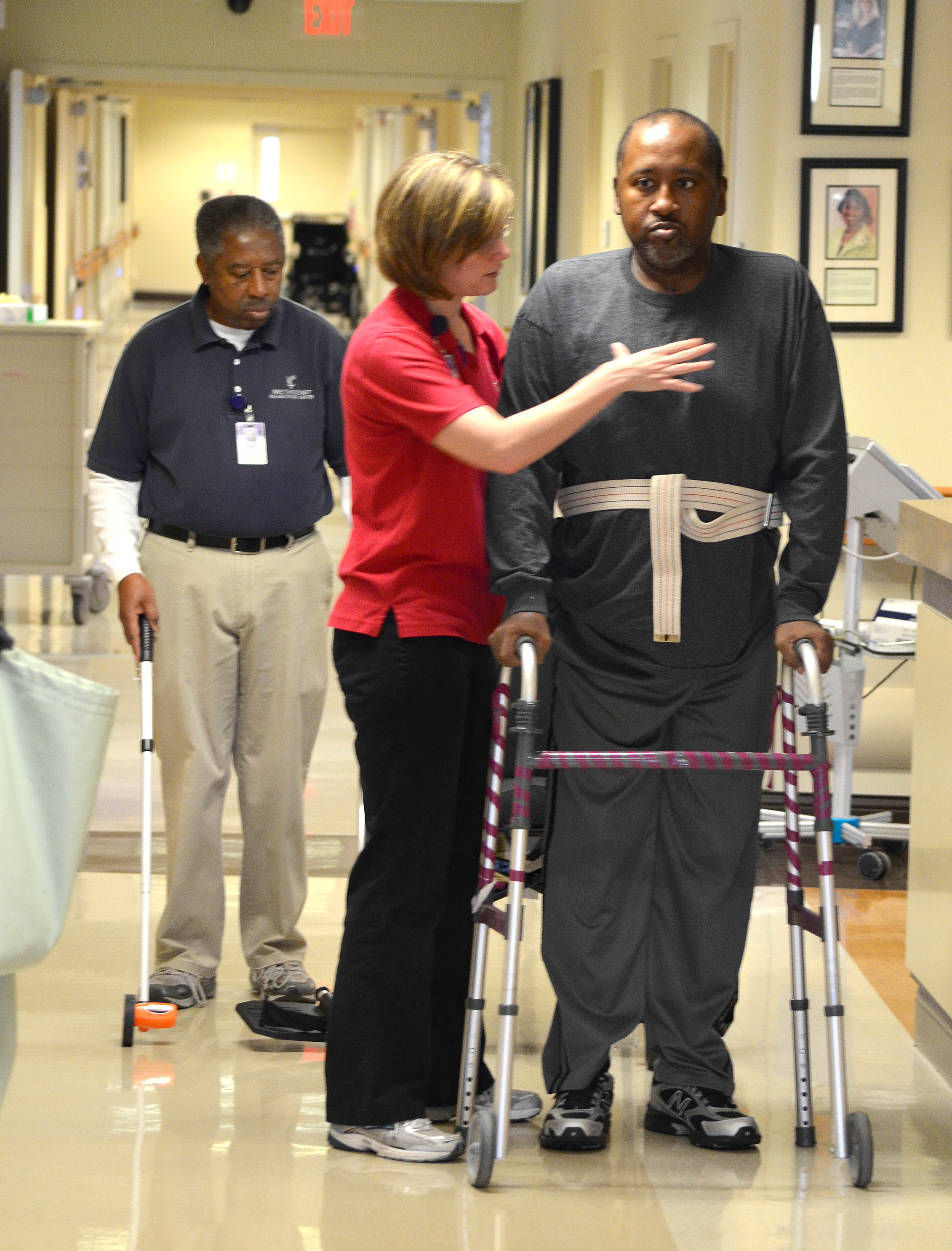 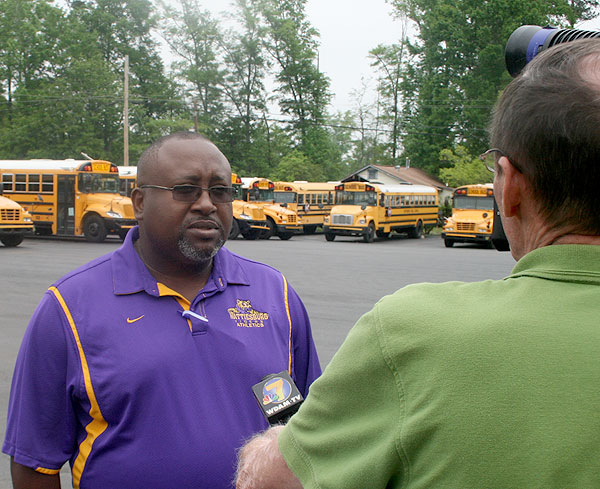 Audrae Barnes talks with a reporter about a bus safety project for the Hattiesburg School District during this interview in early 2012.

Audrae Barnes got the heart-dropping news over the phone.

The transportation center for the Hattiesburg School District—his beloved workplace for nine years—had been hit hard by an F-4 tornado.

“One of my guys called me and said: ‘Boss, you’re going to have to get someplace else to work,’” said the director of transportation and fleet management for the district. “My office was an actual house trailer, and it was knocked off its foundation.”

Normally, such news would send the 42-year-old flying out the door, his head full of ideas to handle the crisis. But nothing has been normal since the September day that doctors found a nickel-sized tumor near his brain stem.

Like victims of the Feb. 10 storm, Barnes is still adjusting to a life upended by the unexpected. Who knew a bout of dizziness would lead to such a devastating diagnosis?

“The neurosurgeon would have to remove a portion of my skull and move my brain over to get to the tumor,” he said. “She told me all the things that could go wrong, but I still wanted to have the surgery. I was initially told I would be in ICU for 24 hours. But my wife told me I was there for a month. She showed me pictures, and they made me cry. I didn’t know I was that sick.”

After suffering a series of complications—a blood clot in one leg, a stroke and a staph infection—Barnes was as helpless as a newborn when he transferred to Methodist Rehabilitation Center in Jackson on New Year’s Eve.

The man known for his quiet confidence in times of turmoil, who managed the safe transit of some 3,000 students each day, had to depend on others for the simplest tasks. “He couldn’t sit up or roll over, he couldn’t do anything but breathe,” said his wife, Elaine. “But I always knew he would be OK because I have a strong faith in God.”

Ordinarily a hefty guy—he loves cooking so much he owns a $3,000 grill—Barnes was a shadow of himself after his illness shaved off 100 pounds. And it hurt to see him so feeble, said longtime friend Willie Burton, the Hattiesburg School District’s director of capital and facility maintenance.

“He always had the ability to take command of a situation and handle it in a calm manner,” Burton said. “So to see him in the state he was …. I had to coach myself to make sure I was strong for him.”

Elaine said Burton was one of many colleagues who came through for her husband. “He has 600 contacts in his phone and 589 of them are his real friends,” she said. “They call. They text. They visit. And they sent money. We’ve had great support.”

Elaine said she was also buoyed by staff at Methodist Rehab, whose expertise was evident “from day one.” “The quality of the service and the people was excellent,” she said. “Everyone seemed to have a strong faith in God, which really helps.”

To fully participate in therapy, Barnes first had to overcome vertigo, dizziness, nausea and intermittent vomiting—common problems when a tumor or surgery site is near the brain stem. The challenge in such cases is to find medications that relieve the symptoms without compromising a patient’s ability to participate in therapy, said Dr. Zoraya Parrilla, the physical medicine physician who leads Methodist Rehab’s nationally recognized brain injury recovery program.

“As a doctor, I want to concentrate on treating the most disabling conditions, while trying to be as conservative as possible when using medications that might cause cognitive side effects,” she said.

Hampered by vision problems and debilitated by months of bed rest, Barnes was initially too weak to feed himself or even hold his head up, said his therapists at Methodist Rehab.

“He also had a hard time initiating or engaging in conversation,” said physical therapist Kathleen Dobbs.

“His first day … he could barely look at you,” said therapeutic recreation specialist Kelcey Pollard.

But full days of speech, occupational and physical therapy, coupled with the occasional recreational outing, eventually awoke Barnes to the world around him.

“When he started out, I could only do auditory tasks with him,” said speech therapist Holly Radicioni. “But then he started reading, writing and using a computer.”

What friends call his “gift of gab” soon returned, too. “By the time he left, we were talking up a storm,” said occupational therapist Chuck Crenshaw.

“He just brightened up, and he started encouraging the other patients,” Pollard said. “He was a star student, for sure.”

Barnes also made good on his vow to get back on his feet, albeit with the aid of a walker. “He told me his goal was to walk out of here, and with help, he did,” Dobbs said.

The brain injury team said Barnes benefited from several of Methodist Rehab’s specialized therapies. When he was still too weak to stand, he practiced walking on the hospital’s weight-supporting treadmill system. And sessions on the hospital’s Dynavision visual and motor training device helped improve his vision and balance.

It helped, too, that his wife kept pushing him to meet his goals. “She was a little tough on him, but it worked,” Crenshaw said.

“I tried to be cooperative,” he said. “I wanted to be able to accomplish whatever mission they had for me.”

“What he enjoyed most was cooking,” Crenshaw said. And before he left, Barnes whipped up a batch of homemade spaghetti sauce to thank the brain injury crew. “And he did it all from memory,” Radicioni said.

Barnes returned home to Hattiesburg on Feb. 7. When the tornado touched ground three days later, he was enjoying a visit from a friend who works for the city. “His phone just kept ringing, and he told me he was going to have to leave,” Barnes said. “We knew things were being devastated.”

Barnes got a firsthand look a few days later. “It brought tears to my eyes,” he said. “I saw part of my building and part of my shop destroyed. Buses were on top of buses. Windows were broken out. We had a Red Cross building across the street, and the top of that building was on several of our buses.”

The tornado damaged all but two of the district’s buses, but kids weren’t left standing on the curb when classes resumed. “Audrae made some calls for us and helped us secure buses to keep the department rolling,” Burton said. “I reassured him that he is doing more than he knows.”

Still, Barnes is frustrated that he can’t do more. ‘It is hard not being there,” he said. So he’s giving it his all in therapy and plotting his return. “As soon as I can walk on my own and not worry about falling will be the time. I would love to get back to work.”