Drew Thomas, a native of McCool and a resident of Methodist Specialty Care Center in Flowood, recently earned his GED via Rankin County’s Adult Education Program. 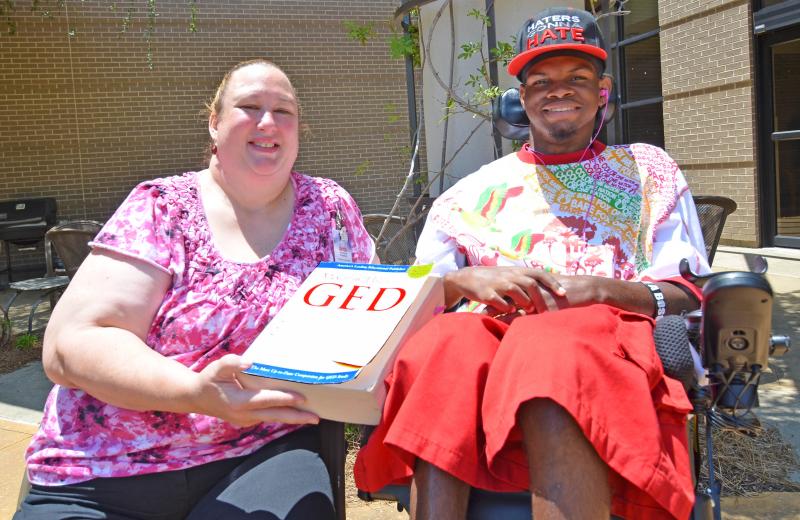 Patricia Powers of Jackson, at left, a volunteer at Methodist Specialty Care Center, assisted resident Drew Thomas, at right, with studying, note taking and test taking on his way to earning his GED.

After a paralyzing car crash during his 10th-grade year, Drew Thomas of McCool left the classroom for the therapy gym.

At Methodist Rehabilitation Center in Jackson, the then 17-year-old learned to adjust to life in a wheelchair. But it wasn’t until he moved to Methodist Specialty Care Center in Flowood—the hospital’s long-term care facility for the severely disabled—that Thomas got his studies back on track.

With the help of center volunteer Patricia Powers of Jackson, the 21-year-old recently became a proud GED recipient.

“It was an experience I will never forget,” he said. “I felt like a million bucks.”

It meant a lot to Powers, too, because she had seen her own son, Roman, sidetracked by a similar situation. He was 15 when he was paralyzed by a gunshot wound and sent to Methodist Rehab to recover.

After helping her son get a diploma, Powers knew she was the one to tutor Thomas—particularly since she would also be giving back to Methodist Rehab.

“It holds a special place in my heart,” she said.

As a paraplegic, Roman was able to write and didn’t need his mom to attend class with him.

Thomas, however, has only limited use of his hands, so Powers became his sidekick, accompanying him to class to assist in taking notes and tests.

“She was a big help,” Thomas said. “Some days I would be a little grumpy and she would help me get through it. She pretty much was a lifesaver. She pushed me real hard.”

“Drew is like my third child,” Powers said, laughing. “We’ve gotten really close since I started volunteering in 2012. He reminds me a lot of Roman.”

Powers was with Thomas every step of the way—accompanying him to classes three times a week at Rankin County’s Adult Education Program, all the while maintaining her career as a nursing assistant and a busy family schedule.

It was an above-and-beyond commitment that led her to be named Methodist Specialty Care Center’s Volunteer of the Year at the annual Volunteer Awards earlier this year.

“We strive to provide support for our residents to achieve to the best of their abilities,” said Jan Robertson, director of the center that is home to up to 60 people with disabilities such as severe spinal cord injuries or ALS. “And we have our wonderful volunteers like Pat Powers to thank for much of that support.”

Methodist Rehab’s Assistive Technology Services has also assisted Thomas’ studies. Assistive technology associate George Gober says he continues to work with Thomas to pair him with the proper adaptive devices to allow him to use a computer.

“I went from using a Quadjoy [mouth-operated joystick] to a trackball, so that was a big step forward for me,” Thomas said.

“Because Drew has some movement in his hands that was a better fit,” Gober said.

Thomas is the first resident of MSCC to obtain a GED since it opened its doors in 2003. But he hasn’t been the only one to further his education.

Adam Booker had already attended some college when he became a quadriplegic in a 2006 car crash. Since becoming a MSCC resident, he has completed a two-year degree at Hinds Community College and is currently attending Millsaps College.

He’s an inspiration to Thomas, who says he doesn’t want to stop with his GED. He hopes to continue his studies in the fall at Hinds Community College.

Math was Thomas’ favorite subject during the GED program, but he hasn’t decided on a career path yet.

“Maybe business, becoming a motivational speaker, or even criminal justice,” Thomas said. “I want to be able to get out and see the world.”

Powers says she is on board to help Thomas with his studies at Hinds as well.

“Right now my schedule will allow it,” she said. “So we’re hoping it works out.”

Assistive technology can also help with the more demanding workload of college.

“We have discussed migrating him to some voice recognition software,” Gober said. “That’s something we will push to the forefront when he goes to school, since writing is so critical in a college setting.”

Powers says she is honored by the opportunity volunteering at Methodist gives her to help people like Thomas.

“Life should be lived to the fullest each and every day, and Methodist Specialty Care Center gives their residents an opportunity to do just that,” Powers said.