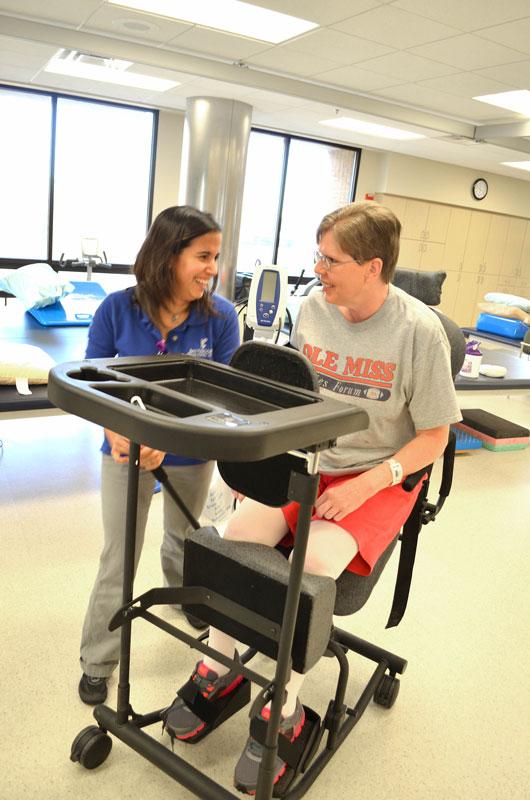 Terri Kitchens, right, shares a laugh with Methodist Rehabilitation Center physical therapist Josie Stacy as she readies for a session on the center’s standing frame. The device helped Terri work on strength, endurance and range of motion in her ankles. 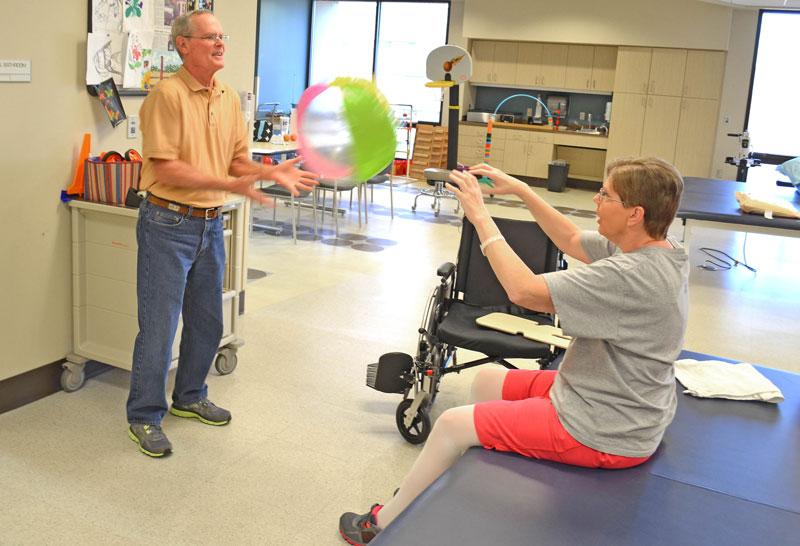 Bill Kitchens wanted to be by his wife’s side as Terri recovered from brain injuries related to a pulmonary embolism. So he was grateful that Methodist Rehabilitation Center encourages families to take part in therapy activities—like batting a beach ball. 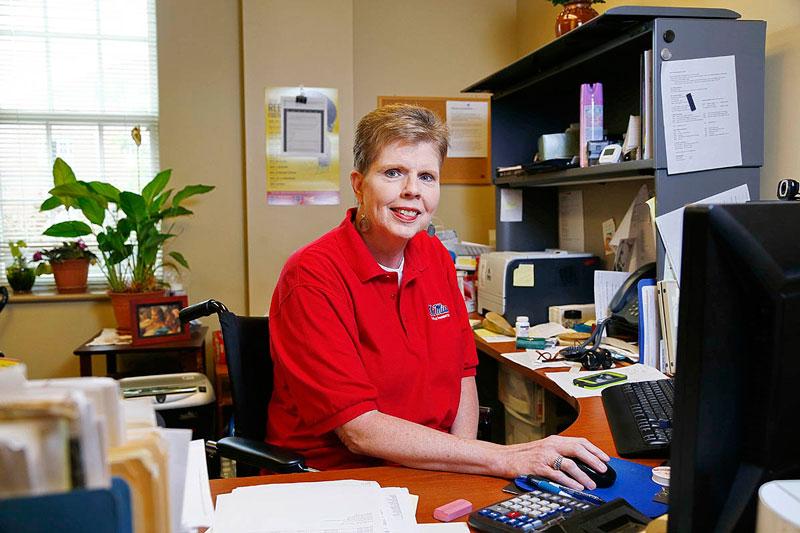 After surviving a near fatal pulmonary embolism and enduring months of therapy, Terri Kitchens is happy to be back at her duties as office manager of Parking and Transportation at the University of Mississippi.

Bill Kitchens still can’t believe he heard the tiny cry that nudged him awake in the wee hours of Aug. 29.

“It was a faint little noise,” he said, “and I woke up on the couch and thought: What was that?”

Thinking his wife, Terri, had left on the TV, Bill headed down the hallway of his New Albany home, never expecting to walk in on a real-life medical drama.

“Terri was sitting on the side of the bed, wobbling, barely able to support her weight,” he said. “She was saying: ‘I can’t breathe. Call an ambulance. I’m not going to make it.’

A clot was blocking a major artery in Terri’s lungs, cutting off oxygen to her brain. The condition is called a pulmonary embolism, and sudden death is the first symptom in one quarter of cases.

When Terri’s heart quit beating, Bill began chest compressions—never mind that he had never learned CPR. “I knew she would stay dead if I didn’t do something,” he said. So he pumped and prayed, stopping only to call 911 and open the door for the ambulance crew.

Rescue workers revived Terri, and she was rushed to nearby Baptist Memorial Union County.  After diagnosing the PE, doctors transferred Terri to North Mississippi Medical Center in Tupelo via helicopter.

Brain injuries caused by anoxia (lack of oxygen) can be particularly devastating to a person’s ability to think, understand, learn and remember, and Bill said Terri’s doctors “didn’t offer much realistic hope.”

But it wasn’t long before Terri was astonishing the neuropsychology team that evaluated her progress while at Methodist Rehabilitation Center in Jackson.

“Terri recovered better cognitively than any anoxic brain injury survivor I’ve worked with,” said Clea Evans, Ph.D., director of neuropsychology at MRC. “She exemplifies what’s possible when you combine a patient’s hard work and perseverance with the support and expertise of an experienced rehabilitation team.”

In March, Terri reclaimed her job as office manager of Parking and Transportation at the University of Mississippi in Oxford. It’s a recovery so remarkable, she was asked to share her success story at Methodist Rehab’s annual employee recognition banquet in April.

“I’m driving and back at work doing 20 hours a week,” she proudly told the audience. “I want to thank everyone that worked with me, had faith in me and knew I was going to make it. I don’t think I’ll ever forget being at Methodist Rehab.”

“I was very involved in her medical care and therapy, and I’ve been following her since her discharge,” said the physical medicine and rehabilitation physician for Methodist Rehab’s brain injury program. “We’ve created enough of a bond that I’ve enjoyed every single step of her recovery."

Those steps must have seemed all uphill, at first. While NMMC doctors did all they could to save Terri’s brain—including putting her in a medically induced coma and lowering her body temperature—the moments without oxygen had taken a toll.

Some 31 days after her embolism, Terri was a self-confessed “total zombie.” When it came time to choose a rehab facility, it was left to Bill to decide. “I was told you need to go someplace where they have experience with brain trauma and dealing with issues caused by anoxia,” he said.

While Methodist Rehab was the obvious choice, Bill said he worried about taking Terri three hours away from friends and family.

“Then I talked to a man whose wife had been a patient at Methodist Rehab,” he said. “She was an RN and she and he both said it was the place to be. They said it’s great if you want to spend the night, and they encourage family to be at rehab sessions. And that pretty well clinched my decision. Terri was just so vulnerable; I couldn’t see trusting anyone to take care of her.”

Methodist Rehab speech pathologist Alayna Colvin said Bill was a constant at his wife’s side, and she had to laugh when she would see him doing Terri’s swallowing exercises right along with her.

“He was very, very involved, and always cheering her on,” Colvin said. “She really made a lot of progress. Every day she was a little sharper and faster.”

Still, Terri’s perfectionist standards made it hard for her to realize how far she had come. So Bill said she benefitted from the objective evaluations and emotional support provided by Methodist Rehab’s psychology staff.

“Her high standards for success helped serve as a motivator on most days, but sometimes she became so frustrated with her challenges that she needed cheerleading,” Dr. Evans said.

During those moments, Bill proved to be “of utmost importance,” Dr. Parrilla said. “He was supportive, yet strong enough to push her to the next level.”

As Methodist Rehab staff did the testing that ultimately decided the best time for Terri to return to driving and work, it was obvious she had been spared the severe cognitive difficulties often associated with oxygen deprivation.

But she still faced serious physical challenges, including muscle spasticity and myoclonic jerking, a type of movement disorder characterized by involuntary twitching.

The right medicine quickly resolved the latter problem. But treating Terri’s spasticity took a prolonged approach. The condition had contracted her joints, clenching Terri’s arms into a double V against her chest and turning her feet inward.

Dr. Parrilla helped ease the crippling spasticity with injections of paralyzing Botulinum toxin, and Terri’s therapists used a variety of strategies to increase her range of motion. “We did serial casting on her knees, elbows and ankles to give her a prolonged stretch,” said physical therapist Josie Stacy.

“After we got her range of motion back, we were able to work on functional use of her hands,” said occupational therapist Lori Horne. “Putting her make-up on by herself was a big day for her.”

After months cooped up in hospitals, Terri was also “over the moon” when she got to go on an outing to Target, said therapeutic recreation specialist Kelcey Davis. But Bill reacted like a parent sending a kid to school for the first time.

“He didn’t know what to do,” Pollard said. “He watched her get strapped into the bus and he was a little lost—which was cute.”

Terri said another important milestone was learning to use a transfer board to transition from the bed to her wheelchair. She finally whittled the 15-minute ordeal down to 43 seconds—a touching bit of tenacity to all who had witnessed her struggles.

“Terri is such a special person—she has been an inspiration to everyone around her,” Dr. Evans said.

After leaving Methodist Rehab, Terri continued her hard work at a therapy clinic closer to home. Today, she’s walking with a cane, a sight that got Stacy all choked up when Terri came to visit. “I couldn’t believe it,” Stacy said. “I was almost in tears.”

Terri and Bill get emotional, too, when they consider what it took for the 53-year-old to triumph over her injuries. “I know God has answered prayers,” Terri says.

“The first miracle is how I ever heard her from two rooms away,” marvels Bill. “I believe God sent angels to wake me up.”

See a doctor right away if you have symptoms of Pulmonary Embolism: