Reversing the trend: How MRC stemmed the rise of nursing injuries by investing in a proven patient lift system 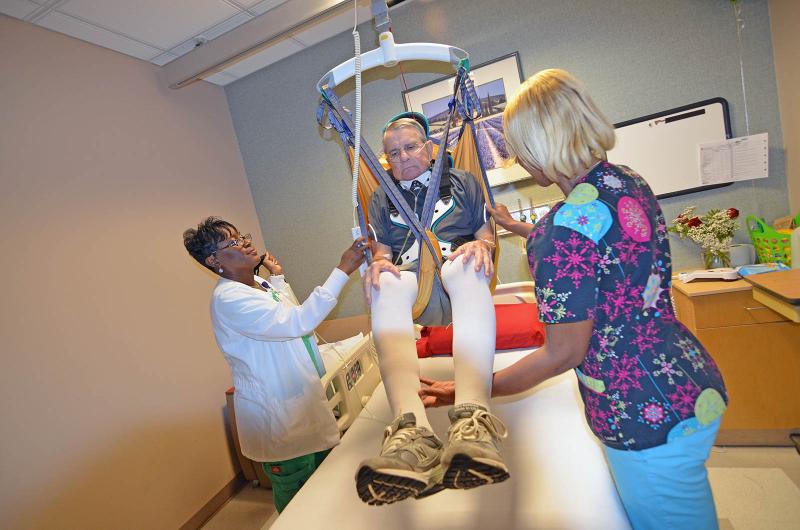 Nursing is one of the most dangerous jobs in America, according to a series of investigative reports airing during February on National Public Radio.

But in Mississippi, Methodist Rehabilitation Center is reversing the national trend.

The Jackson hospital has reduced such injuries by more than 80 percent since it began installing a 132-unit, ceiling-mounted lift system in 2010.

“In 2009, we had 54 employees injured while lifting or moving patients,” said Marcia King, Methodist Rehab’s director of education and process improvement. “By 2013, that number had dropped to 10.”

“Now it’s so much easier, on us and on the patients too,” said Jennifer Averett, a certified rehabilitation registered nurse at MRC.

Methodist Rehab treats patients with stroke, brain and spinal cord injuries, so staff has long faced the challenge of moving people who have paralysis, crippling muscle stiffness and other disabling conditions.

But recent trends had converged to make the job even tougher. The state’s rising obesity rate meant patients were heavier than ever at a time when a failing economy was keeping older nursing personnel in the work force.

A hospital committee began researching the problem in 2009, focusing first on safe-lifting policies, staff education and the use of equipment. While members were impressed with the success of ceiling-mounted lifts being used at Veteran’s Administration hospitals, they initially thought the system would be deemed too expensive—the proposed 132 units would cost $759,000 to install.

But Methodist Rehab’s administration decided to make the investment, believing it would benefit employee and patient welfare and eventually pay for itself.

Haseloff said the lifts have already helped reduce Worker’s Compensation and employee replacement costs from $233,761 in 2009 to $2,097 in 2013. The hospital expects to recoup its initial investment by the end of this year.

“When you don’t have an employee at work that means someone has to fill in overtime, or you work short, or you have to bring in another staff person to work in their place,” said Haseloff. “So that adds additional costs to providing health care services.”

The lift systems also may help prolong the careers of nursing staff, who often risk disabling injuries as they go about the routine tasks of caregiving.

A nurse at MRC since 1995, Averett can personally testify to the perils of physically lifting patients. “We had a lot of injuries, we stayed sore,” she said.

Using the new system, staff members simply secure a harness around the patient’s body and press a button to activate the lift. The result is a lot less opportunity for injury for both caregiver and patient.

All patient rooms at Methodist Rehab’s main campus feature the ceiling lifts, including those currently being renovated for the reopening of MRC’s third floor this fall.

Each of the hospital’s three therapy gyms also is equipped with the new lift system, as is the radiology department. Methodist Outpatient Rehabilitation Center in Flowood also uses the system.

“Therapists have also developed ways to use the equipment to assist with patient therapy activities such as walking, getting up off the floor and mat exercises,” King said.

The first Methodist Rehab facility to get the lifts installed was Methodist Specialty Care Center in Flowood, Mississippi's first residential care facility designed especially for the younger, severely disabled person. All 60 rooms have lifts, and King said they’ve been well received by patients and staff.

“At Specialty Care Center, residents like the lifts because they get properly positioned in their wheelchairs more quickly, and they get up more often because it takes staff less time to get them out of bed,” King said.  “The first Thanksgiving after the lifts had been installed the residents were up and ready for Thanksgiving dinner in record time.”

In addition to improving employee health, increasing patient satisfaction and reducing costs, the lift system also helps attract new employees.  “I think it’s good for recruitment to say that we have lifts in every patient room,” Haseloff said.

“I think every hospital should have them,” Averett said. “If only they would have had these when I got out of nursing school 24 years ago.”