The right place: After a car wreck left her struggling, Alexa Cacibauda got her life back with Methodist Rehab 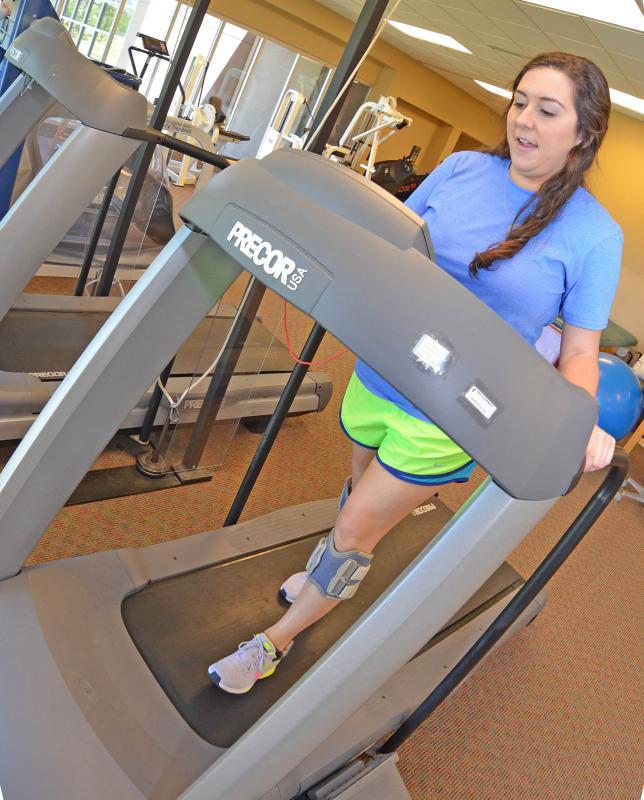 With the help of her Bioness L300 electrical stimulation units as well as a physical therapy regimen to improve balance and strength, Alexa Cacibauda regained her ability to walk while at Methodist Rehab’s Quest program. 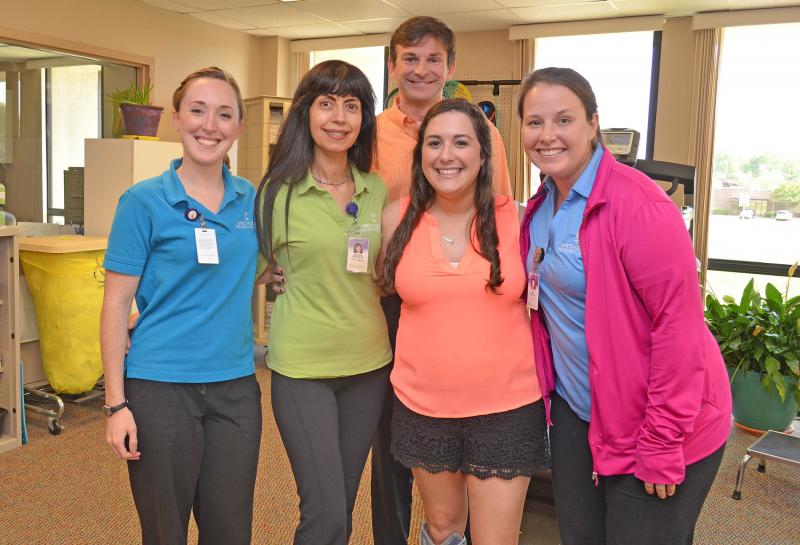 Alexa Cacibauda doesn’t remember much about the accident.

It was December 30, 2013, and she was on her way to Walmart to pick up supplies for a New Year’s party. While turning onto U.S. 90 in her hometown of Ocean Springs, she was hit by a motorist who ran a red light and plowed into the left side of her car.

She hit her head so hard it smashed the driver’s side window.

It was a relief when her doctors told her it was only a concussion and sent her home the same day to get some rest.

“They said to just go back to normal life,” Alexa said.

But in the weeks and months after the traumatic event, strange symptoms appeared that suggested something worse. She had bouts of forgetfulness. Writing papers for college, which came easily before, became a chore. She was plagued by constant headaches. When odd sensations in her legs grew into numbness and she could no longer walk or stand, she and her family began searching for an answer.

“I couldn’t understand why I wasn’t able to finish my homework, why I didn’t feel good, why I couldn’t remember things—I almost thought I was going crazy,” Alexa said.

While a student at Mississippi State University in Starkville months after the accident, Alexa underwent therapy at Oktibbeha County Hospital Rehab Services to address her issues. Her occupational therapist, Linda Maiers, recognized that her problems weren’t typical of a simple concussion. So she called someone she knew could provide the Cacibaudas an answer.

“She called me and said, ‘I’ve got this girl coming in to see me, and I don’t think she ever had a diagnosis of brain injury, but she presents just like one,’” said Mollie Kinard, north Mississippi outreach nurse for Methodist Rehabilitation Center in Jackson.

MRC treats patients with stroke, spinal cord injury, brain injury and other neurological injuries and illnesses. When Kinard heard Alexa’s story from her mother, she knew MRC could help.

“I told them that she needs to see a brain injury rehab doctor,” Kinard said. “So I called our former brain injury program director Dr. Zoraya Parrilla and told her Alexa’s story, and she agreed to see her.”

“Mollie’s our hero,” Alexa said. “She got us to the right place.”

Alexa was assessed at MRC’s outpatient clinic in June 2014—some six months after her accident. As part of that assessment, MRC performs a neuropsychological evaluation to document cognitive and motor functioning and plan treatment. This can often pinpoint problems traditional neurological diagnostics cannot and was crucial in Alexa’s diagnosis of post-concussive syndrome, a type of mild brain injury.

“It was in a way a relief when they told me I had a brain injury,” Alexa said. “I didn’t understand until I came to Methodist.”

“It was hard to see her just get hurt in the first place, and then to deteriorate,” said her mother, Rose Cacibauda. “And then—no solutions. But then we came to MRC, and they had all the solutions. They were like, ‘Yes, we know what’s going on, what’s wrong with her brain, and we can fix it, we can help her.’ And that was a really good thing to hear.”

Dr. Parrilla referred Alexa to MRC’s Quest Program, an intensive outpatient program for people with brain or spinal injuries who wish to make a successful return to work, school or home life.

Alexa had always planned to become an elementary school teacher, so her main goal at Quest was to become able to finish school and realize that dream.

“The frustration prior to that point was just phenomenal because we weren’t getting any answers,” said Joe Cacibauba, Alexa’s father. “So once she got to Quest, you could start to see the changes little by little. It made us all feel even better because we knew something was happening.”

At Quest, she worked with clinical psychologist Dr. Danny Burgess to address some psychological issues, occupational therapists Allison Harris and Jennifer Sivak for cognitive issues related to work and school, and physical therapist Patricia Oyarce to help her regain her ability to walk.

“When I first saw her, she could barely walk 200 feet with the walker,” Oyarce said, but she could see that Alexa had the potential to recover.

“What was most remarkable about her walking was she had a very stiff gait,” Oyarce said. This told her that her muscles weren’t the problem, but rather her brain’s ability to communicate with those muscles and vice-versa.

So Oyarce fitted her with the Bioness L300, a neuromuscular electrical stimulation system designed to help persons with neurological conditions walk more naturally.

“She had the range of motion,” Oyarce said. “It goes both ways—the brain is communicating to the muscles, and the muscles are sending feedback to the brain. The Bioness helps with that connection, it reestablishes communication.

“The Bioness is generally prescribed for foot drop—but she really didn’t have foot drop, she was having problems with the timing of her muscles. It really helped her during exercises and walking to be able to turn her muscles on and off at the right time. It really made a big difference.”

By the time Alexa graduated from the Quest program on April 30, 2015, she was walking normally with the help of two Bioness devices, one for each leg.

“It’s the best,” Alexa said. “In December, I took my first steps without my walker. They’ve improved my muscle memory. It’s been life-changing. I’ve been able to drive, be independent again and go back to teaching. They’ve brought back my quality of life.”

Alexa also utilized several other programs throughout MRC’s outpatient network. For some of her issues with neck and shoulder pain, she received soft tissue massage from physical therapist Teresa Sawyers at MRC’s outpatient clinic in Flowood. She was also referred to Dr. Philip Blount at MRC’s Pain and Spine Center for nerve treatment. She has also been treated for dizziness by physical therapist Susan Geiger, who specializes in vestibular disorders.

“I’m glad that she made it to us and that we could provide what she needed—our experience with working with people with similar types of neurological conditions,” Oyarce said. “I think the nice thing about Alexa’s rehab journey was she was able to really benefit from all the different disciplines of our clinic at Quest, as well as MRC as a whole.”

Today, Alexa is living in Washington, D.C., where she is currently student teaching at Marie Reed Elementary School. She is set to graduate from MSU in December, and wants to teach full time and help with inner city literacy programs in the nation’s capital.

“We’re glad to see her get smile back,” Rose said. “She didn’t smile for a long, long time.”