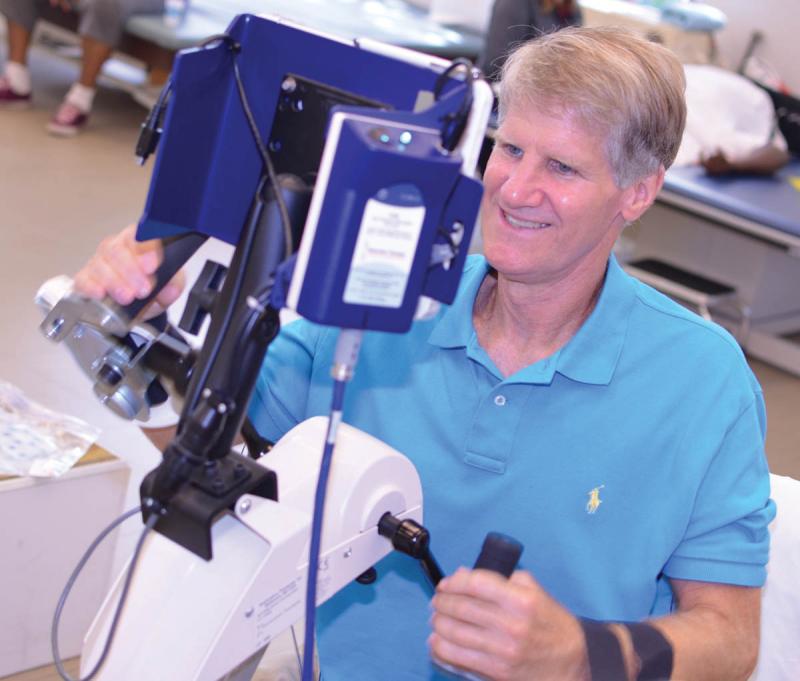 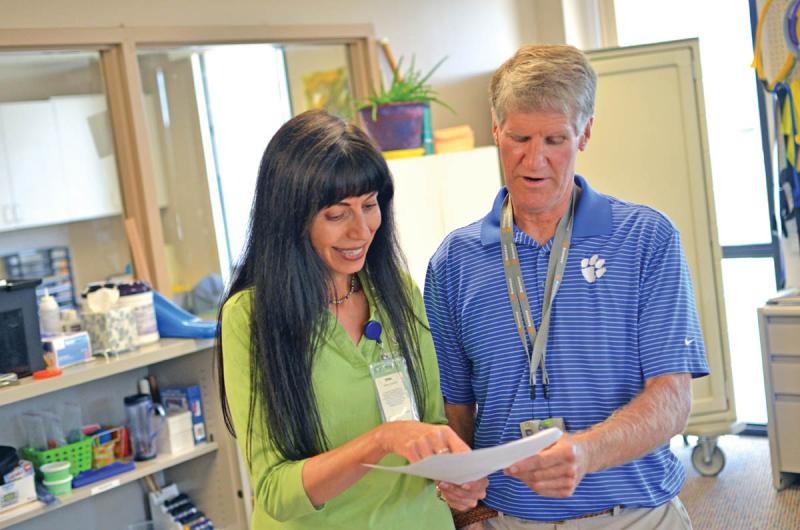 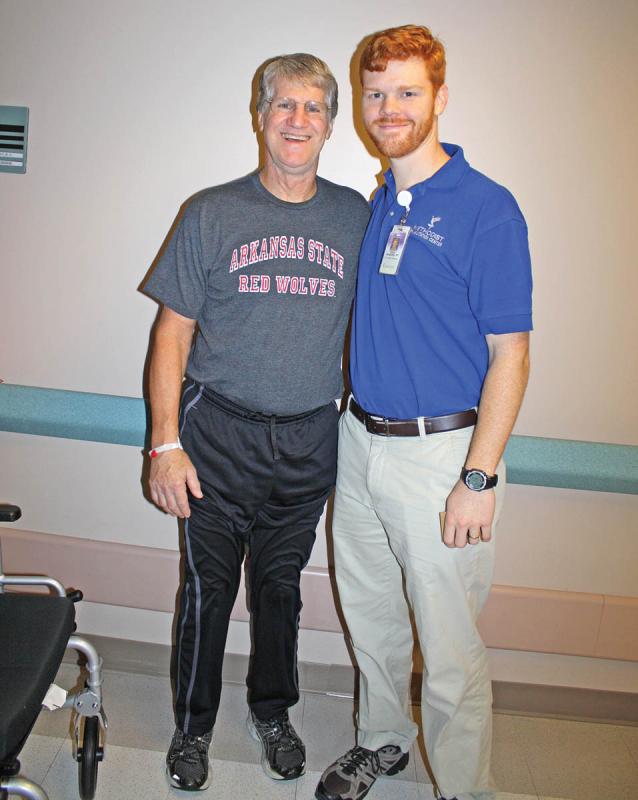 In Methodist Rehabilitation Center physical therapist Chris McGuffey, Gary Heine had the benefit of a long-time family friend who pushed him to excel.

Everything in the room was familiar, yet nothing was the same.

All around were the usual tools of his trade. Exercise bikes for patients to pedal. Colorful balls to lift and throw. Mat tables to stretch out on. Even a small set of stairs to climb.

Yet despite 32 years as a PT—including 18 leading Mississippi Baptist Medical Center’s rehab department—Heine felt like a nervous newbie as he took in his surroundings.

This time around, he would be the one struggling to overcome a disabling injury.

“I was like everybody else—fearful because you don’t know what kind of return you’re going to get,” he said. “But it’s better not to know sometimes, and in my case that’s true. If I didn’t have control over certain muscles moving, I’d rather leave it up to the Lord.”

“I think I know too much here”

As a therapist for Mississippi Home Care, Heine would leave his Madison house each workday to head to the homes of his patients.

“I don’t really remember it, but I hit a truck that was behind a tractor,” he said. “I woke up across the gear shift, and I couldn’t move anything. I thought: This is not good.”

Later, the father of four would ruefully tell his pastor: “I think I know too much here.”

Heine was flown to the University of Mississippi Medical Center, “a very scary night for our family,” said his wife Kym.

“We were all out of town anywhere from two hours to 24 hours away with the exception of our youngest child, who was a senior in high school,” Kym said. “Driving for hours to get to the hospital, knowing your loved one was airlifted because he was unable to move, was the most terrifying thing any of us had ever experienced.

“Our church family, folks throughout the greater Jackson area, as well as the state and nation, instantly rallied around him, either physically or through prayer.”

Heine had damaged disks in his upper spine, causing a condition called central cord syndrome. While he had never treated the syndrome, Heine was well aware of its impact. “I thought I definitely won’t be moving my arms,” he said.

“With central cord syndrome, fibers on the inside of the spinal cord are more damaged than those on the outside,” explained Dr. Sam Grissom, director of MRC’s spinal cord injury program. “Patients tend to have more paralysis or weakness in the upper extremities.”

After surgery at the University of Mississippi Medical Center to fuse the damaged parts of his spine, Heine recovered movement in his legs. But his arms still lay limply by his side when he arrived at Methodist Rehab on Nov. 5, 2014.

Heine said he chose to rehab at MRC because he knew the staff had extensive experience treating spinal cord trauma and other neurological injuries and illnesses.

“Methodist definitely has its own niche,” he said. “And it’s a needed niche.”

“He always wanted to do extra”

As a long-time therapist, Heine expected to know some of the veteran MRC staff. But the most familiar face belonged to one of the younger therapists on the spinal cord injury team.

“When I was 5, we lived in the same cul de sac,” said MRC physical therapist Chris McGuffey. “I played with his kids. And when I wanted to go to PT school, I got my observational hours with him, which ultimately helped me get into PT school.”

McGuffey says treating someone with Heine’s PT experience was a bit intimidating at first. “I knew he knew what good therapy was. But his personality was so laid back, I wasn’t intimidated for long.”

Indeed, McGuffey was soon putting Heine through his paces.

“Chris busted my butt,” Heine said. “It was great, though. I knew I had to work hard. I wasn’t going to give up.”

“Working with him, you could push him as hard as you wanted to,” McGuffey said. “It was more making sure he didn’t overdo it.”

“He always wanted to do extra,” said MRC occupational therapist Elizabeth Hust. “He would say: Can I take some things back to my room to work on? It felt like every week there was something new he could do. He showed a lot of progress quickly.”

A strait jacket of pain

As a PT, Heine could recognize which of his muscles needed work. But he still had a lot to learn about overcoming extreme muscle spasms when he began therapy at MRC’s Neurological Rehabilitation Clinic in Flowood in January, 2015.

“Spasm is a neurological component I’m not used to,” he said. “I have to stretch and work through it because I’ve got to get range of motion. But every night when I go to bed I know I’m going to go two steps backward. I’m like a board when I wake up. Initially, I felt like I had a metal jacket all over my back. Now it feels like it’s more on my shoulders.”

Heine said several therapies have been a “saving grace” in his treatment—myofascial release (MFR), soft tissue massage and joint mobilization. MRC physical therapist Teresa Swyers says MFR focuses on fascia, a network of stretchy tissue that encases everything in the body like a protective stocking.

“It’s like a spider web and a strain on any one area affects the body’s total alignment,” Swyers explained. “Myofascial release uses gentle sustained pressure to activate the release of connective tissue to restore normal alignment and decrease the strait jacket of pain. I’m also working to reeducate his muscles and the brain pathways to help him move in a more normalized fashion.”

“It’s a technique that can range from extremely gentle to fairly aggressive. And in his case we’re using the more aggressive variety,” Jacobson said. “I’m stretching his joints along the specific movement plane it’s supposed to travel.”

The maneuvering can result in some uncomfortable—if not downright painful—positioning, but Heine is not one to complain.

“He’s definitely a hard-working, motivated patient,” Swyers said. “Being a PT himself and in tune with his own body, he has been able to achieve outcomes that otherwise would be highly unlikely.”

“I want to provide for my family”

Heine tries to take one day at a time. But he was worried about getting back to work. “I’m old school. I want to provide for my family,” he said.

Quest helps people with brain and spinal cord injuries return to work, school or community life. And since several PTs are on Quest’s staff, they had no trouble determining the on-the-job skills Heine would need to succeed.

He had to be physically able to position patients and demonstrate exercises. And since his Tin-Man rigidity went right down to his fingertips, he also had to work on writing and using a computer.

“With central cord syndrome, fine motor skills are among the last abilities to come back,” said Quest occupational therapist Julie Walker. “I would stretch his fingers, and he would just about scream. Once he gets really stretched out, he’s a lot better.”

To keep Heine limber, physical therapist Patricia Oyarce had him doing both yoga and Pilates to improve his ability to integrate core/global muscle systems as related to stability and controlled mobility. “He was real receptive to it,” Oyarce said. “I gave him one of my yoga videos, and he has been doing it once or twice a week at home.”

Outside the gym, Heine also practiced some job skills by helping a neighbor who had knee replacement surgery do her physical therapy homework.

As he readied to return to a reduced schedule at work nearly a year after his accident, Heine predicted his experience as a patient would make him a better therapist.

“I’ve always been pretty compassionate, but it makes you more empathetic for sure,” he said. “My faith is stronger, too. I’ve realized the things in life that are truly important are friends, family and faith.”