Brianna rides again: Brianna May is back in the saddle after an incredible recovery from a near-fatal fall from her horse 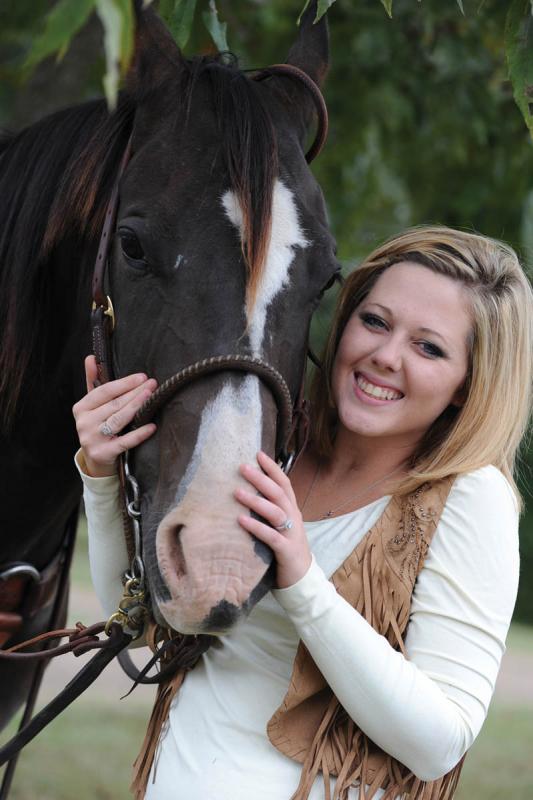 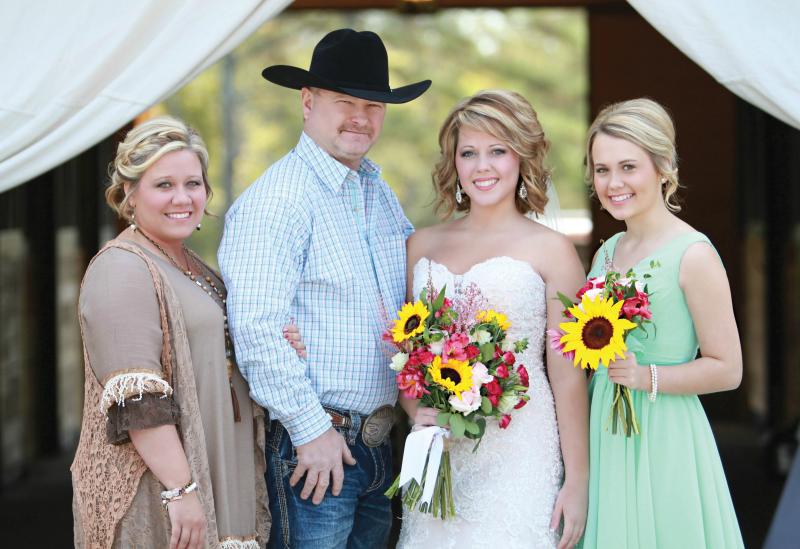 Brianna May’s wedding was a day of celebration for, from left, her mother Shanna Cumberland, stepfather Scoot Cumberland and sister Skylar May. 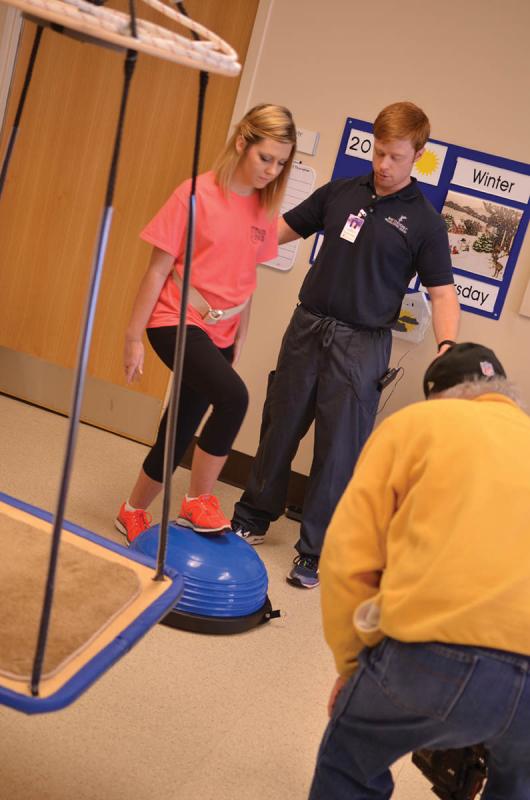 As a TV cameraman captures the action, Brianna May and physical therapist Alex Touchstone demonstrate therapy challenges devised just for her.

The question came two days after Christmas and it sent Shanna Cumberland to her knees.

It had been seven days since 20-year-old Brianna May had fallen headfirst off her horse, and Cumberland thought her comatose daughter was holding her own.

But Brianna was showing signs of brain death, said her doctors. It was time for family and friends to say good-bye.

“We thought we had lost her,” Cumberland said. “We were planning for her funeral.”

But as doctors prepped for tests to declare Brianna legally dead, her condition changed. A dilated pupil—a possible sign of severe brain damage—began to shrink.  “And she started having brain waves every 15 minutes,” said Cumberland.

Finally, there was a flicker of hope, and Cumberland turned to her Caring Bridge journal to rally the “prayer warriors” back home in Sebastopol.

“We are now asking for prayers for a miracle,” Cumberland wrote. “All I know is she is still with us and fighting. I’m not going to sugar-coat it and say there is much hope. But THERE IS hope. I’ve still got my faith in God.”

“Nobody has gotten close to Bri’s story”

Today, only some bristly hair where her head was shaved indicates Brianna once lay clinging to life in a neuro-ICU bed at the University of Mississippi Medical Center in Jackson.

So her team of caregivers almost didn’t recognize the bubbly blonde when she returned to UMMC for a visit. “They cried,” Brianna said. “I walked for them and their jaws dropped.”

Cumberland won’t ever forget the caring UMMC staff that kept her daughter alive, but the time in ICU is all a big blank to Brianna.

Her first memories are of rolling into Methodist Rehabilitation Center on Jan. 20, a pitiful replica of her former self. The country girl who loved to mud-ride and barrel-race was as weak and wobbly as a newborn filly.

“It was hard for her to even get her spoon to her mouth,” said her grandmother Bobbie Thrash.

Still, Brianna was ready to test her limits and her MRC therapists didn’t disappoint.

“They were so good, they really pushed me,” she said of physical therapist Alex Touchstone and occupational therapist Chuck Crenshaw. “Even during their off periods, they would come and get me.”

As therapists for MRC’s nationally recognized brain injury program, Crenshaw and Touchstone are used to helping patients make dramatic recoveries. But they say Brianna’s was a breed apart.

“Nobody has gotten close to Bri’s story,” said Crenshaw.

As an example, Crenshaw points to her performance on the hospital’s Dynavision visual and neuro-motor training device. Patients are timed as they touch flashing targets on the device’s light board, and Brianna quickly became MRC’s undisputed Dynavision champ.

“A week into therapy, she broke our patient record by hitting 91 targets in a minute while standing on a balance ball,” Crenshaw said.

The ball was added when the exercise got too easy for Brianna. And it wasn’t the only time therapists got creative to keep Brianna progressing.

“At one point, we were getting her into yoga positions on a platform swing,” Crenshaw said.

“She made such quick progress, we had to think of new things to challenge her,” said Touchstone. “By the end of rehab, it was hard to believe where she was medically at the scene of the accident. I’m really happy she got her life back and humbled to be a part of it.”

“I knew something was bad wrong”

Fifteen-year-old Skylar May was the only one to witness her sister’s skull-fracturing fall, and she can’t bear to talk about it.

But their grandfather Larry Thrash, aka Poppy, saw the tragedy start to unfold as the two sisters raced toward a curve on a country road.

Just before Brianna went out of sight around the bend, Thrash watched in horror as her saddle started sliding left. Unable to stop her horse, Brianna hit the ground at a gallop.

“I heard her sister scream, and I knew something was bad wrong,” said her grandfather. “I saw her lying on the ground, and I could not do anything. I just froze.”

Brianna was fading in and out of consciousness and spitting up blood as her stepfather, Scoot Cumberland, and other first responders did what they could until EMTs arrived.

“I thought the ambulance never would get there,” said her grandfather. “It’s the awfullest thing I’ve ever been through.”

Brianna was taken to Lackey Memorial Hospital in Forest, then air-lifted to UMMC.  And as word got out of the tragedy, Scott County’s faithful began bowing their heads on Brianna’s behalf.

“Half of Sebastapol was in the emergency room and half was at home praying,” said her grandmother.

“And all the kids at school were saying: I’m a Bri-liever,” said her mom.

On Jan. 31, Brianna’s fellow horse lovers delivered their own get-well wishes via a benefit ride and the sale of some 450 Pray for Bri bracelets. “The ride started at the coliseum in Forest and it was over a mile long,” said Brianna’s grandfather.

When Brianna came home on Feb. 6, another parade of well-wishers greeted her arrival. “We drove through town, made a loop, and the whole elementary was lined up,” Cumberland said. “She got out and hugged the little kids.”

“God has a big purpose for me”

Brianna’s life since her accident has been momentous by any measure.

On Valentine’s Day, she got engaged to long-time boyfriend Josh Trippe. In March, she returned to work at Community Bank in Forest and has since received a promotion. And on Oct. 17, she enjoyed a country girl’s dream wedding, complete with cowboy boots on her feet and a barn roof over her head.

“While our family has been so blessed, I can’t help but to think back to the first of the year when we had started the early stages of planning Bri’s funeral,” mused her mom that morning on the family’s Pray for Bri Facebook page. “Now we have been planning her wedding, and today is the BIG DAY. All this has happened within ten months. Emotional year can’t begin to describe it.”

Josh and Brianna now have a home on the family’s 300-acre spread, just across the way from her parents and grandparents. “I wasn’t leaving this hill,” she said.

Brianna isn’t giving up horse riding either, but she has made some concessions. She now owns a riding helmet and has agreed to temper her taste for high-spirited horses.

“I wanted them prancing,” she said. “But Poppy said he was going to send all my horses to training, and I was going to be bored.”

When people talk about her accident, Brianna says: “I don’t even think they are talking about me. It’s hard to believe I went through that.”

Now that she’s on the other side, Brianna said she sees her unlikely recovery as a reason to give back.

“I think I was used as an example of what God can do,” she said. “I feel like I’ve realized God has a big purpose for me.”

And Job One is to encourage others who face difficult comebacks.

“That’s why I go back to rehab,” she said. “People would come back and visit while I was there and I would think: They are doing good, I can, too.”