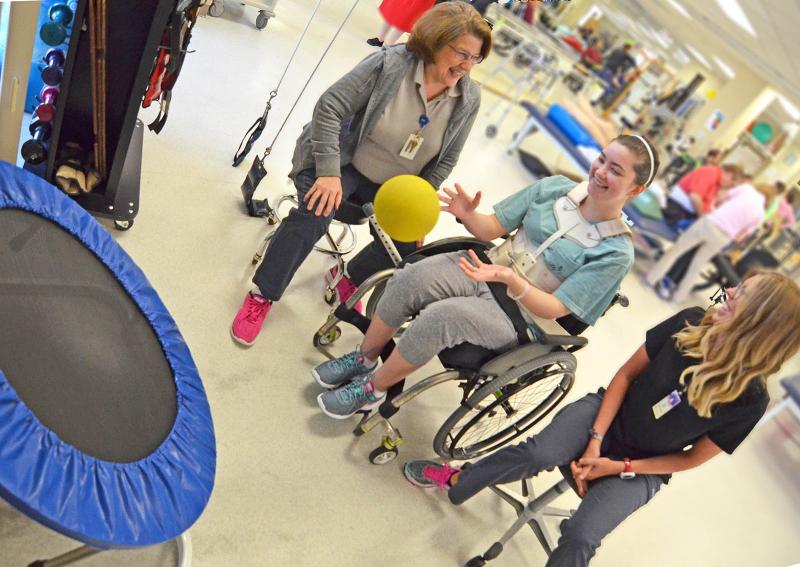 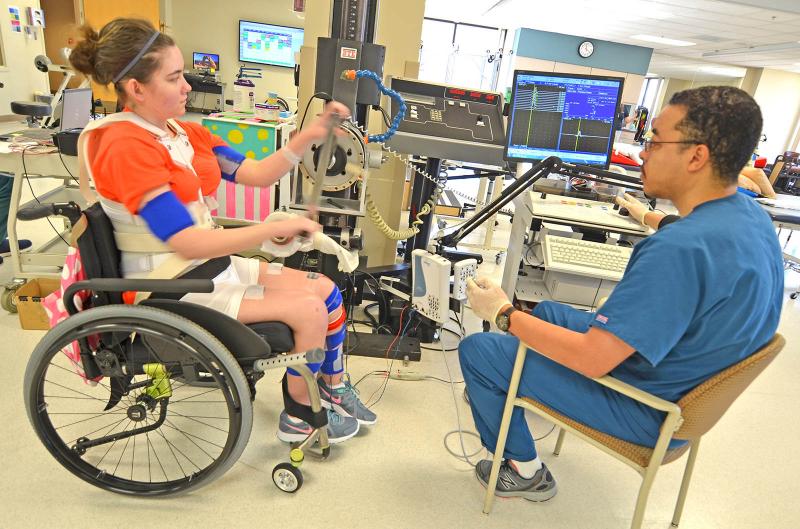 Tony Hayes, right, electro-diagnostic technician for the Center for Neuroscience and Neurological Recovery at Methodist Rehab in Jackson, monitors Shelby Cissom as she participates in a research study to examine the severity of spinal cord injuries. 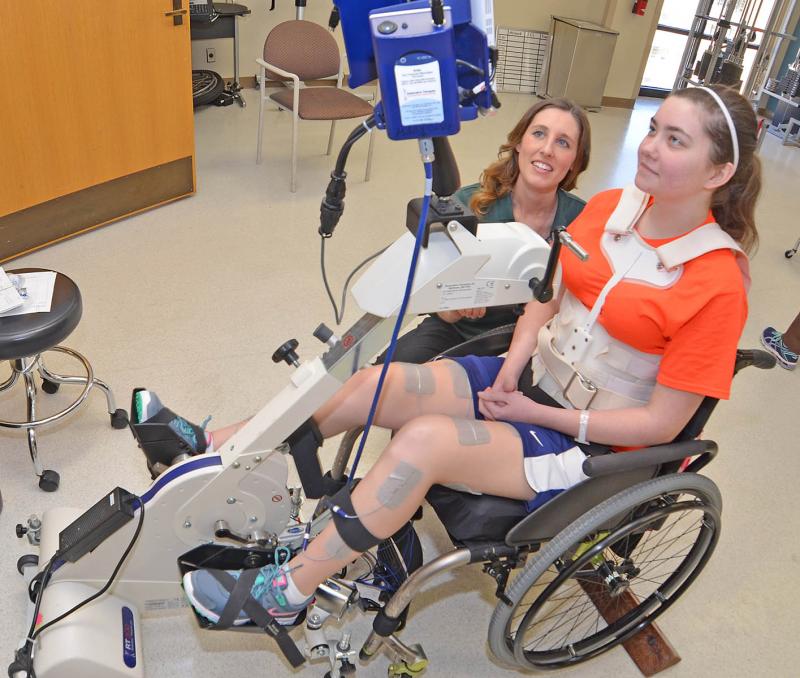 Shelby Cissom of Dry Creek took her first ATV ride buckled into a baby seat on her father’s four-wheeler.

She ended her last strapped to a gurney and headed for a trauma center.

It’s a common fate in a state that ranks No. 15 in ATV-related deaths. And no one knows that better than staff at Methodist Rehabilitation Center in Jackson.

Shelby came to MRC on March 2, the latest in a long line of patients injured on ATVs. During one dismal month, the hospital was home to three paralyzed teenagers and another with a severe brain injury. And just weeks before Shelby arrived, the hospital admitted a patient with an ATV-related amputation.

“I’ve seen several spinal cord injuries over the years and multiple broken bones,” said Debbie Webb, Shelby’s occupational therapist while at MRC. “I think there is a danger of those types of vehicles. They’re useful and can be a lot of fun, but you have to weigh the dangers and take precautions. Knowing the terrain, that’s big. Sometimes you hit a hole and go flying.”

Shelby’s downfall came on Aug. 8, a week and a half before the scholarship student was to pursue a nursing degree at Northeast Mississippi Community College in Booneville.

She was a passenger on a friend’s ATV when a collision flung her face down into a ditch.

“His brakes went completely out, and he tried to miss another rider,” said the 19-year-old. “After we hit, the four-wheeler came to a complete stop and threw both of us off.

“I don’t remember going in the air, but I do remember coming down. I tried to catch myself. That’s how I fractured my left wrist and fractured and dislocated my right wrist.”

The broken wrists were worrisome, but Shelby was more alarmed by the lack of pain in her lower body.

“I couldn’t feel my legs and I freaked out,” she said. “There was actually a nurse riding with us, and she was the first one to me. She kept saying: Don’t move.”

Also on the scene was Shelby’s aunt Tina Bryan. She drove up on the accident and felt a disturbing sense of déjà vu.

“I was actually not going to get out because in June a 7-year-old had a bad ATV wreck within 5 feet of there, and she died in my arms,” Bryan said. “But my daughter-in-law saw Shelby’s boots, and I knew it was her. That’s when I parked the vehicle and got out.”

Cynthia Cissom arrived before a helicopter transported her daughter to The Regional Medical Center in Memphis. Shelby still had to make the trip without her mom, but was grateful that she at least knew a member of the helicopter crew. “He helped keep me calm, and he stayed with me in the emergency room, too,” Shelby said.

After surgery to stabilize her spine, Shelby learned she was considered a “complete” paraplegic. The diagnosis meant she’d likely never recover movement below her injury site.

“I knew it at the scene,” she said. But she hasn’t given up hope. “I believe if God wants me to walk, I will,” she said.

If not, “I’m OK with it,” Shelby added. “If what I want to do in life can be accomplished in a wheelchair, that’s what I’ll do.”

Certainly, she has been a model of perseverance, said her parents and MRC staff.

“I wouldn’t have made it if she hadn’t been this good,” said her mother. “She has made the journey easy for us.”

“She has been so positive since day one,” agreed MRC physical therapist Megan Mikula. “She has come to terms with her injury and welcomed any opportunity to learn how to increase her independence.”

Shelby had more time than most to let her situation sink in. Before starting therapy, she spent months at home waiting for her wrists to heal.

Her mother and aunt took care of Shelby during that time. And Cynthia said they struggled because they knew little about spinal cord injuries.

“Just being at Methodist Rehab has been a blessing,” Cynthia said. “The people have been really good to us, and it has helped so much.”

While her family was being educated on caregiving skills, Shelby dove into therapy. To master the abilities needed to become more independent, she had to build her strength, balance and endurance.

“When she first got here, she was quite weak,” Webb said. “Now, she’s much stronger and is able to get dressed with just help with set-up.”

MRC’s focus on disabling injuries and illness meant Shelby was privy to specialized therapies and equipment. An example is her sessions on the hospital’s FES (Functional Electric Stimulation) cycle.

In physical therapy, Shelby also learned the ways of wheelchair life, such as how to open doors while seated and to pop wheelies to get over curbs. “She has gotten a lot more confident in what she can do,” Mikula said. “She has a great attitude.”

As she finished her final days of therapy, Shelby said she was looking forward to returning home.

“I loved being here and progressing, but it’s time to go home and see my family,” she said.

She was also ready to reconnect with friends. “It’s not healthy for a 19-year-old girl to only see her family,” she joked.

Shelby’s also eager to get back to driving and start school. “I was never depressed (after my injury), but I did have a couple of days when I was pretty down,” Shelby said. “It was when my friends were getting their books for college and the day they went to college. I was looking forward to that. So it was hard for me to handle seeing my friends do it and I couldn’t.”

Now, she believes the experience may be an advantage as she goes into healthcare.

“I would like to think it will make me a better nurse,” she said. “Maybe I can inspire someone to do something they think they couldn’t do before.”

ATV Injuries by the Numbers

26—Estimated percentage of injuries to children under age 16