“I can’t say this is it because I had one setback”: Victim of domestic violence returns to job she loves with help of standing wheelchair 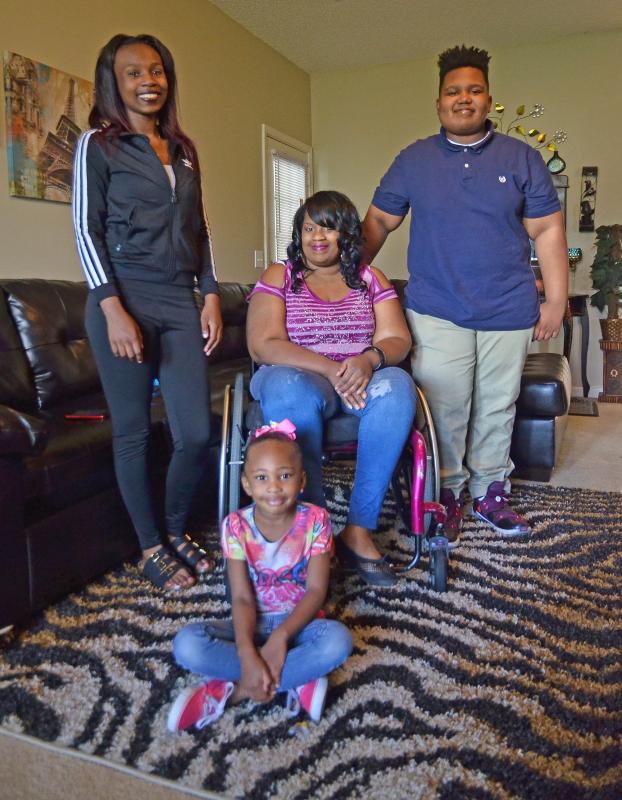 Jamecca Jones, seated, says her children have been a motivating force in her recovery. From left are Jaya, 16, Janique, 5, and Dravian, 12. 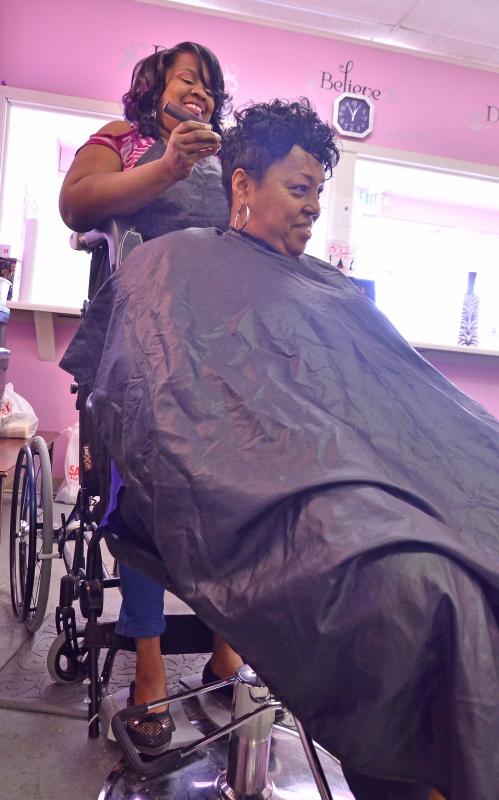 Catrina Lampkin, seated, gets her hair fixed by longtime friend and business partner Jamecca Jones. “I knew she was going to snap back because she has always been a strong person,” Lampkin said.

To return to the job she loves, Jackson hairstylist Jamecca Jones needed the aid of a standing wheelchair. She turned to Methodist Rehabilitation Center staff to help her find the right chair for her needs and a funding source to purchase the wheelchair.

Jamecca Jones has enjoyed “making people look beautiful” since the days she fashioned ponytails and freeze curls for her Bailey High School classmates.

So when a gunshot wound put her in a wheelchair, the Jackson hairstylist was determined to keep the job she loves.

First, she balanced on stacked pillows to reach clients at Shades of Color in Jackson. But that rickety perch has now been replaced by the wizardry of a standing wheelchair.

With a push of a button, Jones can once again rise to her feet and let her fingers fly.

The mother of three was custom-fit with the chair at Methodist Rehabilitation Center’s Assistive Technology (AT) Clinic in Flowood. The clinic’s AT-certified therapists match wheelchair users with the best equipment for their health and lifestyle needs. And that meant giving Jones the means to support herself.

“She wanted to be able to be independent,” said clinic physical therapist Cameron Huff. “And she had the determination. She didn’t want to sit around and wait to do what she needed to do.”

“Life goes on whether I’m in a wheelchair or not,” Jones says matter-of-factly. “I’ve got kids who depend on me.”

Jones became a single parent on May 19, 2014. That’s the night her estranged husband shot her and killed himself in the garage of her home.

“Everything was in slow motion,” Jones said. “When I fell to the ground, I couldn’t feel my legs. I started praying: Lord, please don’t let me die like this. I was thinking about my kids, and I could hear them in the house hollering and crying.

“When I came to, my momma was kneeling over me and praying. She said: ‘You can’t leave these kids. You stay awake.’

“The ambulance came and took me to the hospital. And they said I was lucky to be alive. The bullet went in through my side and out through my back.”

The scenario is not uncommon. Acts of violence—primarily gun-related—are the third leading cause of spinal cord injuries.

Victims of such trauma require more than just a physical approach to healing. And through the services of Methodist Rehab, Jones said she found the all-encompassing support she needed.

“They helped me regain some things I felt like I had lost and made me believe in myself more,” she said.

Catrina Lampkin of Jackson, a long-time friend and business partner, was among the first to visit Jones in the hospital. And she immediately sensed that Jones’ essence was still intact.

“She was all dolled up,”Lampkin said. “And I knew she was going to snap back because she has always been a strong person.”

Jones’ appearance earned her the affectionate nickname “diva” from her caregivers. But she was no prima donna in the therapy gym.

“She came to us with this zealous drive to take care of herself and family on her own,” said Pat Baird, occupational therapist at MRC’s Outpatient Neurological Clinic in Flowood.

As Baird worked with Jones on building strength, endurance and self-care knowledge, the empathetic therapist also became a sounding board.

“I feel like I did my best to encourage her to move forward,” Baird said. “We did a worksite evaluation and made recommendations. And we talked about her working part-time and learning how to pace herself.”

Before long, Jones was filling her calendar with hair appointments. “I couldn’t be still, I had to do something,” Jones said. “And I’m grateful and thankful for the clients who still believed in me and what I can do.”

Jones’ return to her job was aided by her time at MRC’s Quest facility in Jackson. In January 2015, Jones began the outpatient program that helps people with brain or spinal cord injuries return to work, school or community life. And staff there worked hard to connect Jones with the resources to reach her goals.

“That included working with various agencies for funds for a standing wheelchair, creating equipment to make her completely self-sufficient at work and providing a supportive and safe environment,” said Quest therapy manager Julie Walker. “It took a joint effort and it paid off.”

“We did a lot of work simulations, like having her do hair on a mannequin head,” said Quest physical therapist Erin Perry. “She would bring her standing chair here, and she’d practice. She talked a lot about staying motivated for her kids.”

Her children were also top of mind during counseling sessions with Quest psychologist Danny Burgess. All three had been at home when Jones was shot, and she worried about the impact.

“She was struggling with how to deal with that and we talked about community resources and how she could help the kids understand and move forward,” Burgess said.

As a victim of domestic violence, Jones also had to confront her own demons.

“She was feeling vulnerable,” Burgess said. So it was a priority to help her feel safe again. “As our relationship formed, she became more trusting. And that is when the work happens.”

As Jones gained perspective on her own problems, she began reaching out to other patients.

“She was quite an inspiration and role model,” Burgess said. “She’s surprising because she comes across as quiet and a little timid. But there’s quite a force and passion in her. That’s what helped her accomplish what she has accomplished.”

“I don’t easily give up on what I want to do,” Jones said. “I can’t say this is it because I had one setback. That’s like slashing three tires because you had one flat. I’ll just do what I can do and God will do what I can’t.”