United Effort: After his stroke and her surgery, couple takes a tandem approach to recovery at MRC 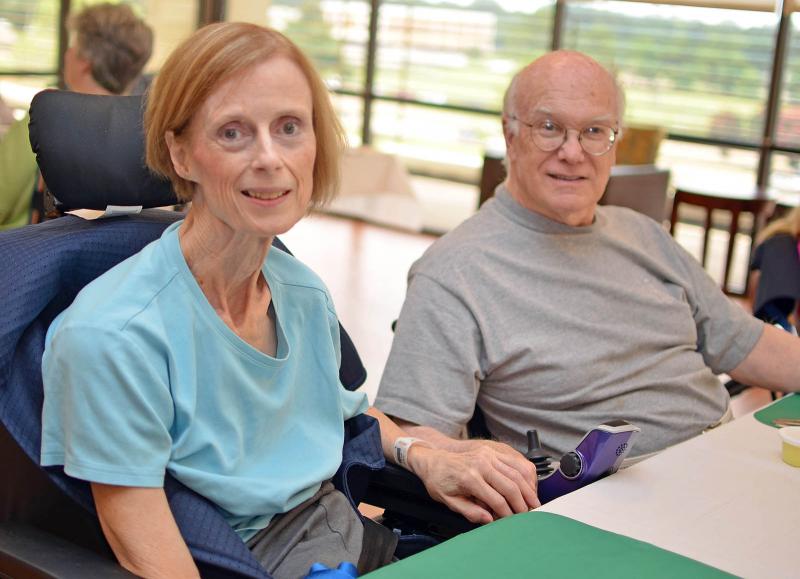 Anne and Charles Hooker share a moment of togetherness during lunch at Methodist Rehabilitation Center. 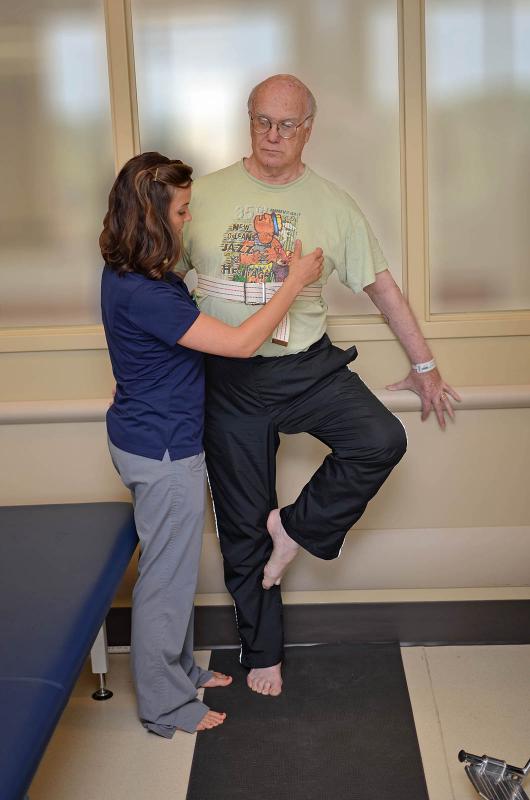 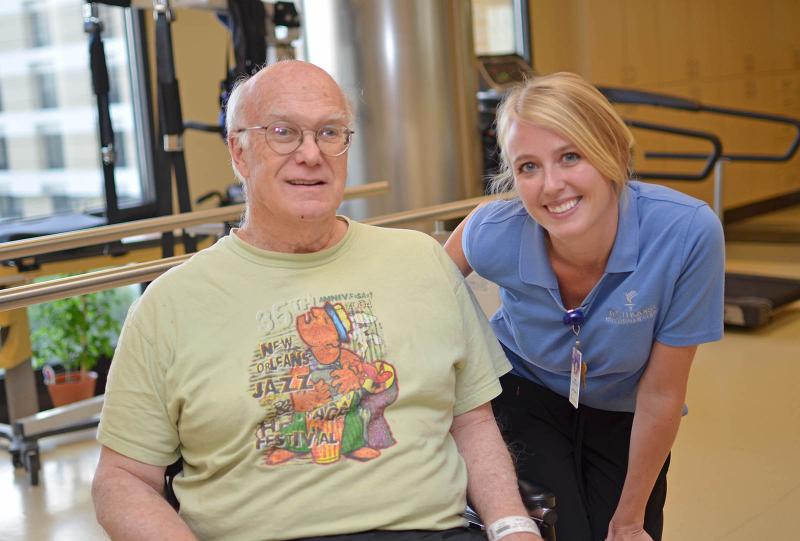 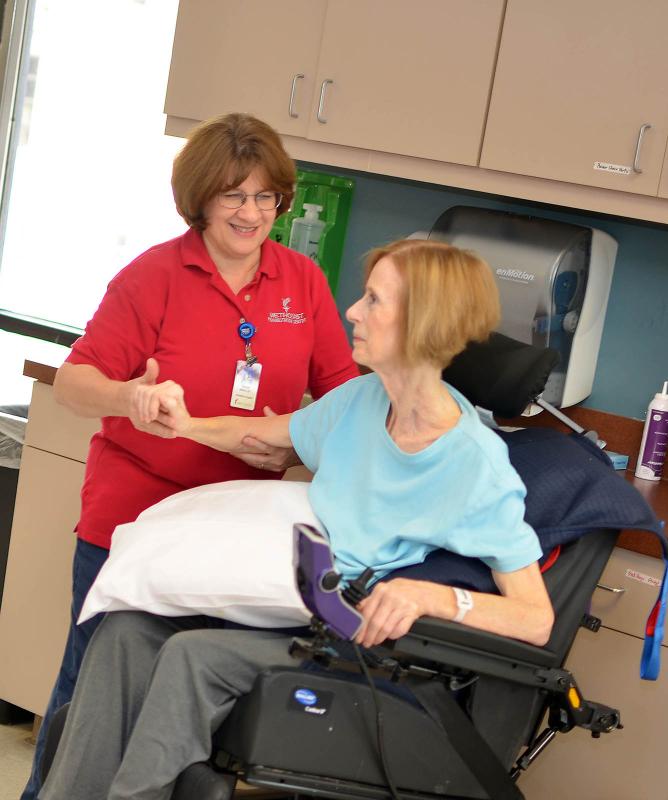 Anne Hooker, right, focuses on improving function in her right arm during therapy with Debbie Webb, an occupational therapist at Methodist Rehabilitation Center in Jackson.

Charles and Anne Hooker of Jackson have enjoyed plenty of meals together during their 48 years of marriage.

But this was a first—sitting side by side in wheelchairs while dining at Methodist Rehabilitation Center in Jackson.

“We hadn’t anticipated this,” Charles said.

But when Charles had a stroke just before Anne underwent shoulder surgery, the two 70-year-olds suddenly needed a setting where both could recoup. And Anne knew just the place.

“I was a patient at Methodist Rehab in 2009 after surgery, and I just remember I got some mighty good exercise,” she said.

“I knew I needed to get better before Anne could get home,” Charles said. “And Anne needed therapy so she could do some things for herself I had normally done—like picking her up and putting her in her wheelchair.”

Although MRC encourages all families to be involved in their loved one’s recovery, Charles and Anne’s situation offered some unique challenges.

“I’ve never had a patient whose primary caregiver was in therapy on another floor,” said Chris McGuffey, Anne’s physical therapist during her stay at MRC.

“She had to do more for herself, but she was very weak,” McGuffey said. “After doing one or two transfers from her wheelchair to her bed, she’d be spent. We worked on getting her stronger so it would not be so taxing on her.”

“One of the good things about here is they work you,” Anne said. “Chris has been re-teaching me to stand, pivot and sit to get from my wheelchair to the bed and vice versa.”

“She did amazingly well for someone with her problems,” Webb said. “Things I thought she would have more problems with, she would figure out ways to do it.”

Charles applied the same persistence to his recovery. And he said MRC staff helped him believe that he could overcome severe weakness in his left side and problems with his speech.

“The spirit here is incredible,” Charles said. “They make you want to do your best.”

In speech therapy, Charles learned to speak more clearly and reclaim the cognitive skills necessary for a return to work.

“Going home, I could easily have the tendency to doubt myself,” Charles said. “But Sarah has done a whole lot to bolster my confidence in my cognitive abilities.”

Charles is also more assured of his physical prowess after several hours of occupational and physical therapy each day.

“It’s the hardest work I’ve done since basic training,” Charles said. “But the therapists are a whole lot nicer and cuter than my drill sergeants.”

“My purpose was to improve his body awareness and balance and also reduce stress and the risk for another stroke,” Mimms said. “He was super motivated. Being a caretaker and helping Anne manage the home was a huge goal for him.”

Charles also wanted to return to his job at Barefield Workplace Solutions and his long-time career in office furniture sales. “We worked on fine motor skills to get him back on the computer,” Mimms said.

Physical therapist Veronica Taylor helped Charles with his walking ability. And she said they enjoyed some interesting conversations about music and politics as he paced up and down the halls. (He likes to joke that his stroke left him “still leaning to the left and not, heaven forbid, to the right.”)

But Charles’ mind was mostly on his mate, especially in the days before Anne arrived at MRC.

“He would joke that I was going to see a lot of PDA (public displays of affection) when his wife got to MRC,” Taylor said. “He made a comment one day that she had no real flaws. He said she never complained, and she was the most beautiful person inside and out.”

Their strong bond meant the couple didn’t want to spend much time apart.

So when they finished inpatient therapy at MRC, case manager and registered nurse Sue Crowell worked hard to find a swing bed facility that could accommodate the couple’s desire to share a room.

Crowell said the search was complicated by medication issues related to Anne’s MS. But she was determined to keep the former high school sweethearts together.

“It was very challenging trying to get their needs taken care of, plus get them in the place they wanted to be,” Crowell said. “But it worked out, and Anne and I both are happy.”

As for Charles, his prevailing emotion is gratitude.

“Anne and our sons and I are eternally grateful,” he said. “Having seen what MRC did for Anne several years ago, we knew how excellent it is. Or really I should say, I THOUGHT I knew. But until experiencing the miracles of MRC myself, I must confess I actually had no idea. As far as I’m concerned, it’s without a peer.”