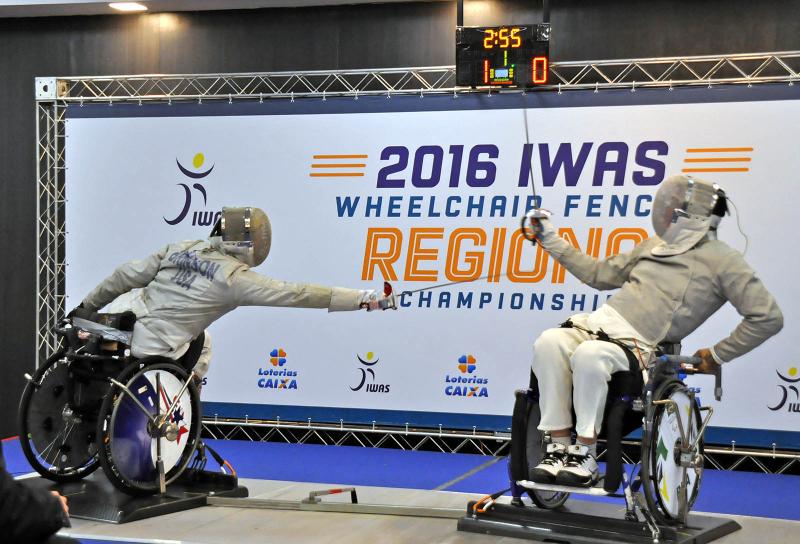 Joey Brinson lunges at an opponent during the 2016 International IWAS Fencing Championship in Sao Paulo, Brazil. 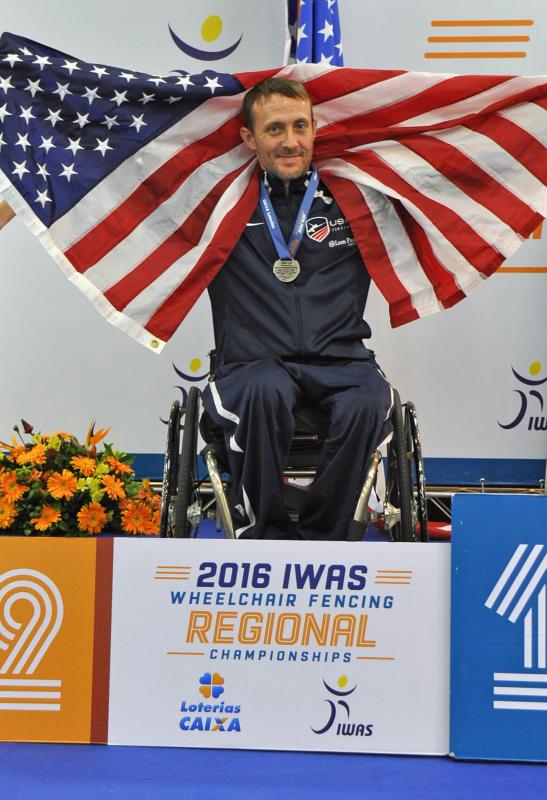 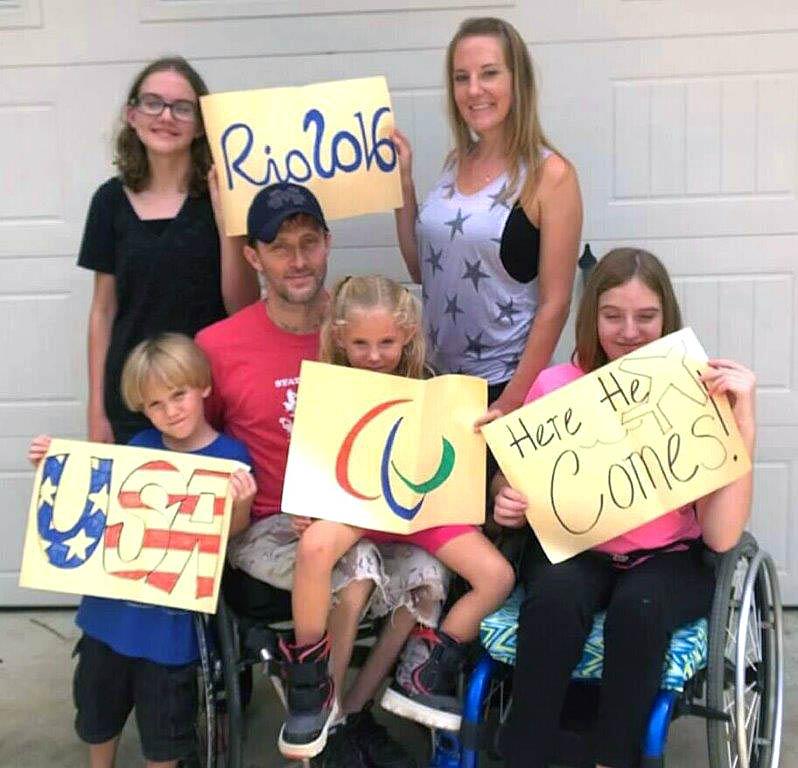 Joey Brinson, third from left, was greeted with a slew of good-luck signs at the home of his girlfriend, Holly Thrailkill, fifth from left. Pictured, from left, are her children Maddie, Carter, Avery Anna and Graceyn.

A day after turning 40, Joey Brinson received the best belated birthday gift of his life.

On Aug. 23, he got word he’d be one of only two American wheelchair fencers to compete at the Sept. 7-18 Paralympic Games in Rio de Janeiro, Brazil.

“Once again, I get to represent my country at the highest level of sport,” he quickly posted on Facebook. “This is last minute news and I keep pinching myself to make sure I'm not sleeping. But now it's time to snap into battle mode....USA!!”

A slot in the saber competition came open after a doping scandal led the International Paralympic Committee to suspend the games’ entire Russian delegation.

“I missed it by a couple of spots initially and when all the Russian stuff went down it bumped me up,” said the Florence resident. “It was a good surprise.”

And not just for Brinson. Ginny Boydston of Jackson, team manager for the U.S. Wheelchair Fencing Team, was beside herself as she gave Brinson the good news.

“I couldn’t calm down,” said Boydston who introduced wheelchair fencing to Mississippi via her role as therapeutic recreation director for Methodist Rehabilitation Center in Jackson.  “That whole day it was like a dream. Joey said if it was a dream, we’re in it together.”

It’s the second time the two have set off for a foreign country to represent the United States in the Paralympics. Both served the same roles in the 2012 games in London.

“Last time it was overwhelming,” Brinson said. “Now, I know what to expect and feel like I can take it a little more in stride.”

Still, he’s not underestimating the challenge. “I keep myself in decent shape, but I’ve really got to crack down and prepare the best I can,” he said.

That’s a tall order considering his first bout is scheduled for 7 a.m. central time on Sept. 12. But he’s dealt with difficulties before. After a car accident left him a paraplegic at age 17, the Florence High School football standout had to come to terms with a lifetime in a wheelchair. And his response was to find another outlet for his athleticism.

He tried sled hockey, wheelchair racing and snow skiing through MRC’s extensive adaptive sports program. But it was his 2006 intro to wheelchair fencing that rekindled his competitive spirit and literally expanded his world.

“I think I’ve traveled to about 15 countries,” he said. “And I couldn’t have done it without the support of Methodist Rehab.”

MRC has provided equipment, coaching and travel funding, while Brinson contributed the hard work it takes to progress in a sport where America is still playing catch-up.

“My first World Cup was in Montreal in 2009,” he said. “And the speed and the technique of the fencers was so much better than I was at that point, it made me want to learn to be better. I didn’t like getting my butt whipped.”

Brinson has since earned several international fencing medals, including two silvers at the Americas Zonal Championship and a silver at the Pan American Wheelchair Championship. He’s now ranked No. 1 in the U.S. in men’s saber and No. 17 in the world in Category B Men’s Saber.

All the while, Boydston has provided the underpinnings to keep his ambitions on track, a role she also fills for the U.S. wheelchair fencing team. So news of Brinson’s late-breaking addition to the squad put her in hyper-drive.

“My mind was racing a million ways for logistics,” she said. She was so distracted, she even blew out a wheelchair tire by putting in an extra 20 pounds of air pressure. “All of a sudden it goes kaboom because I wasn’t paying any attention,” she said.

While Boydston worked on getting Brinson a uniform, securing hubcap covers for his wheelchair and making travel plans, he buckled down to practice.

He enlisted Ryan Estep, another Florence High grad and wheelchair fencer at the London games, to help him prepare. And Estep said he was happy to help Brinson “make a few heads roll in Rio.”

“I’m so glad to see him headed to his SECOND Paralympic Games,” Estep said. “He was my greatest teammate and the guy that really helped me get motivated while I was still in the hospital after my wreck. We shared a lot of memories all over the world, and I owe some of it to him rolling in and showing me how to press on.”

Inspiring others to get active has long been a goal of Brinson’s. And in recent years, he’s been able to mentor Graceyn Thrailkill, the daughter of his girlfriend Holly Thrailkill of Brandon.

Graceyn was paralyzed in 2008 when the family’s van was hit by a drunk driver. And with the help of Brinson’s coaching, she has been able to earn two gold medals in wheelchair fencing at the State Games of Mississippi.

Graceyn and three of her siblings greeted Brinson with inspirational posters when they heard he’d made the Paralympics. “That surprised me,” he said. “I didn’t know they knew how to draw the Paralympic symbol. But they got it from the tattoo on my right forearm.”

It’s a given the Thrailkills will be glued to the TV during Brinson’s bouts. And after the disappointment of losing early in the London Paralympics, Brinson hopes to do his country proud this time around.

“That’s the goal of a lot of athletes, to represent their country,” he said. “And I want to represent my country well. My main objective is competition. I’m going to leave it all on the fencing strip.”