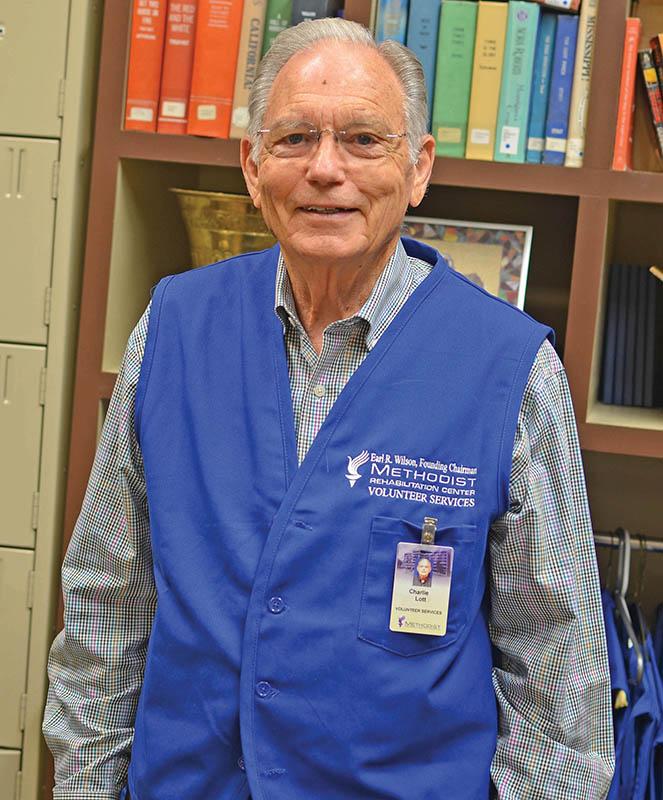 Charlie Lott appears every Monday morning at Methodist Rehabilitation Center with a smile, ready to transport patients to therapy, distribute mail and sing.

He’s known for his cheerful disposition, caring attitude and kindness, all of which have won him a spot in the hearts of patients, families and staff.

For his dedication to MRC, as well as his devotion to several ministries of his church, Lott was honored as an outstanding volunteer by Goodwill Industries Volunteer Services during its 2016 Volunteer Salute Dinner.

It is satisfying to help others, said Lott, 84, a Jackson resident who retired from IBM in 1987after 31 years, then switched to a career in real estate until his second retirement in 2000.

“It really makes you count your blessings when you see what other people are going through,” he said.

Lott sold business equipment ranging from electric typewriters to personal computers during his time in the office products division of IBM. And he said the sales career taught him to always look on the sunny side of life and share that with people he meets.

“Most of my family was in sales,” he said. “If you like sales, that goes along with it.”

A friendship with Chris Blount, director of the Wilson Research Foundation at MRC, led Lott to volunteer at the center.

“I told him I’d like to talk to him about volunteering there,” Lott said, recalling that Blount soon found work for him.

In 2008, Lott began volunteering at MRC, pushing patients in wheelchairs to therapy, often sharing a prayer, scripture or words of encouragement along the way.

Lott delivers mail to patients and to the gift shop at the center. “I once delivered 30 get-well cards to a single patient,” he said, noting that is a record for him.

When a patient celebrates a birthday, Lott and fellow volunteer Dub Duperier of Jackson brighten the day by delivering a Happy Birthday balloon and sign and by singing a round of “Happy Birthday to You.”

During special events that help raise funds for the center’s Wilson Research Foundation, Lott is ready to help with what needs to be done.

Lott’s volunteerism is impressive when you look at the numbers.

He has contributed more than 925 hours of service to the center, said Robby Scucchi, director of volunteer services at MRC. And his dedication led the Mississippi Hospital Association to honor Lott as its 2015 Volunteer of the Year from MRC.

“His philosophy of life is ‘Always look on the positive side of life, count your blessings and be thankful,’” he said. “Without a doubt, Mr. Charlie has been a great asset to the day-to-day function of Methodist Rehabilitation Center and has proven to be an even greater example to the staff and families of our patients with his vibrant and caring heart.”

“He has a servant’s heart,” she said. “He doesn’t just volunteer with Methodist Rehab but also with his church.”

A member of Christ United Methodist Church in Jackson, Lott helps out once a month by delivering meals at 14 houses in Jackson for the church’s Meals on Wheels program.

Lott, who grew up about 70 miles southeast of Jackson in Seminary, spent 18 months on active duty with the Air Force during the Korean Conflict and graduated from the University of Southern Mississippi with a bachelor’s degree in marketing. He and his wife have three sons and a daughter, eight grandchildren and four great-grandchildren.

Lott considers each day a gift and strives to make the most of it. “I’ve been blessed,” he said.