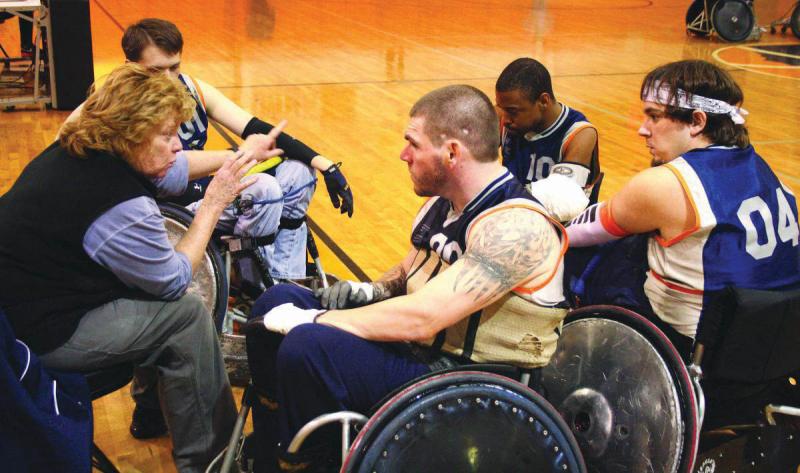 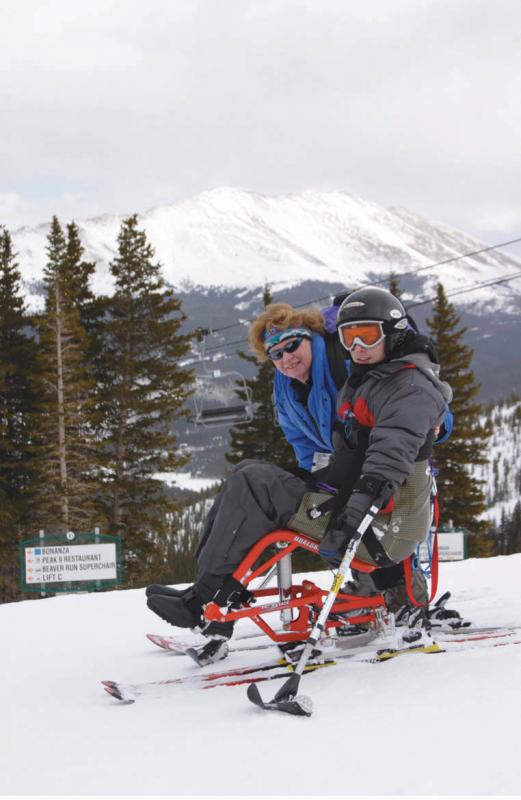 Native New Yorker Boydston shares her love of snow skiing with Chaney at the Breckinridge Outdoor Education Center in Colorado. 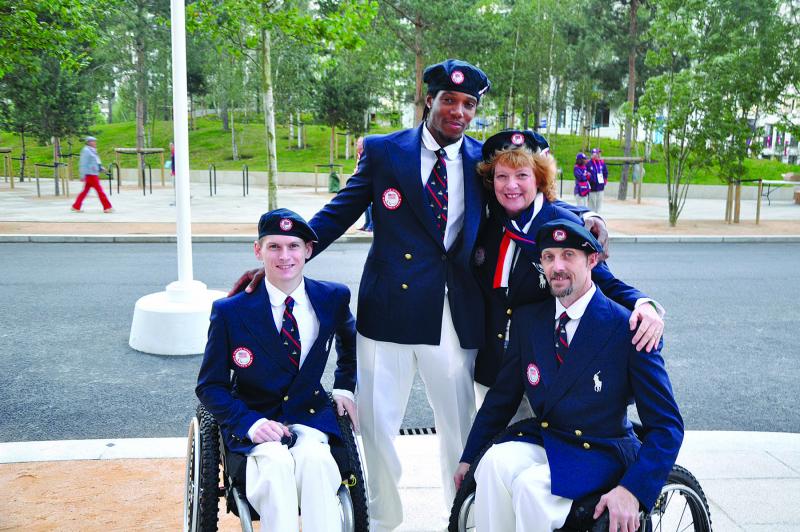 From left, Ryan Estep, Shaquille Vance, Boydston and Joey Brinson take a picture for posterity at the 2012 Paralympic Games in London. 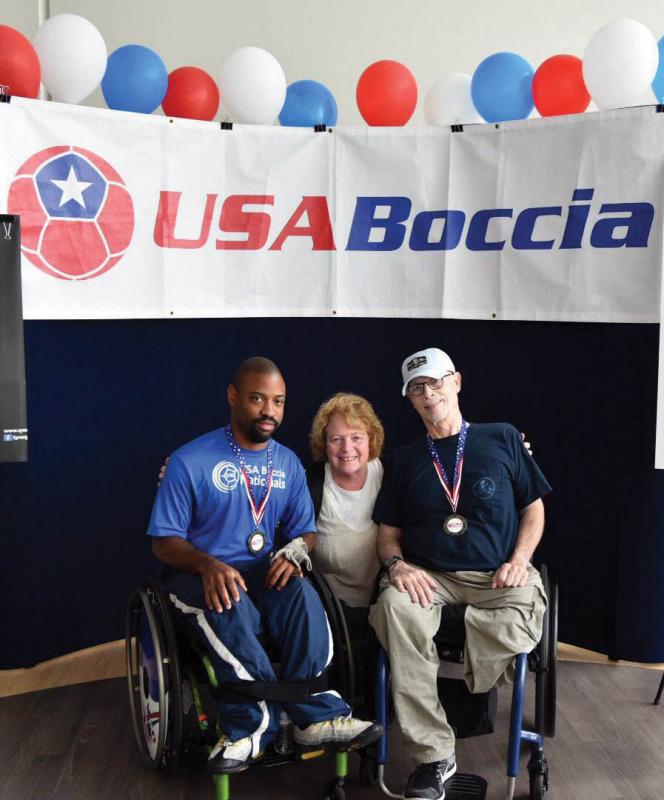 Tennis great Arthur Ashe said: “Start where you are. Use what you have. Do what you can.”

That quote is displayed outside Ginny Boydston’s office at Methodist Rehabilitation Center in Jackson, Miss. And it’s a philosophy she’s followed since arriving at the Jackson hospital almost 40 years ago.

She started with a blank slate. Used every resource she could find. And accomplished what few might have imagined in Mississippi—the creation of a nationally recognized adaptive sports program at MRC.

Recently named a Healthcare Hero by the Mississippi Business Journal, Boydston is quick to share the credit with MRC and other supporters. But fans say she’s the driving force behind the program’s success.

“She’ll say it’s just her job, but you can tell through her actions it means more than that,” said Joey Brinson of Florence, Miss., a two-time Paralympic wheelchair fencer who got his start at MRC. “She sits and watches us get credit for what we do, but she’s the one who should be recognized. Without her, a lot of people like me wouldn’t be doing what we do.”

“There’s no telling how many lives she has enriched and gotten back into the community,” said John Berret of Madison, Miss., a national boccia ball champion. “Sports gets you out, and getting out helps you get better as far as adapting to your disability. Ginny lets everyone do what they can, but she pushes you to do it yourself and be independent.”

Certainly she’s a role model for self-sufficiency. At age 18, the New York native had the chutzpah to move more than 1,000 miles away from family and friends for college at the Mississippi University for Women in Columbus, Miss.

“I was looking for a smaller school,” Boydston said. “And my high school Spanish teacher from Columbus said I should try Mississippi and see what the South is all about. The adventurer and traveler I am, I came down and spent some time with her. We looked all around, and she fed me southern food and it was a marriage made in heaven. I fell in love with the people, the cuisine and the humidity.”

Boydston enrolled at her teacher’s alma mater to study physical education. But it was time spent volunteering with some special needs students that turned her toward a career in therapeutic recreation. “I fell in love with it,” she said. “I found myself giving and receiving.”

After graduating from MUW, she earned a master’s degree in therapeutic recreation at what is now Memphis University. As she sent out resumes, her goal was to get a recreational therapy position somewhere in the south. Meanwhile, she took a post at a suit manufacturing plant in Tupelo, Miss., where she definitely impressed the top brass. “They offered me a promotion,” she said. “But when I got the call from Methodist, I said yes, yes, yes. I was so excited.”

Boydston spent her first years at MRC working in the therapy gym with patients who had arthritis or a stroke, brain or spinal cord injury. “Wheelchair racing was the first sport I attempted to coach,” she said. “The MRC Ladies Auxiliary raised the money for my first racing wheelchair. I had to learn the equipment and teach patients how to use it correctly.”

An early adopter of the sport, Wiley Clark of Moss Point, Miss., said he got involved to enjoy recreational activities with his children. “I just got into it because my kids were getting old enough to be riding bicycles, and I wanted to be able to play with them,” Clark said. “I guess it kind of snowballed from there.”

A quadriplegic, Clark became a three-time Paralympian in wheelchair racing. And he was just the first of Boydston’s recruits to compete in the Olympic-style competition for the physically disabled.

“It went beyond anything I could imagine,” she said. “I always wanted the opportunity to be part of the Paralympics, but never did I think it would be in the capacity I am in today.”

As much as Boydston enjoys her role at international competitions, she’s not one to focus all her efforts on elite athletes. She’s just as happy to introduce sports to newbies like DeJuan Surrell of Jackson.

Growing up with cerebral palsy, Surrell never had the chance to play sports until he joined MRC’s quad rugby team. Now, he’s also a wheelchair fencer and recently shared the national spotlight with Berret as half of MRC’s award-winning boccia ball team. “She definitely taught me a lot of sports and it has meant a lot,” Surrell said.

Randy Lavender of Tupelo is another who became an athlete after meeting Boydston. “I didn’t get into sports until after my car accident,” he said. “I was not athletic because I worked in grocery stores starting when I was 13 years old.”

But after Boydston got Lavender interested in wheelchair racing in 1990, he’s been a willing participant in most of her programs—even ballet.

“I didn’t want to be laughed at,” he said. “But most anything she comes up with, I’m glad to experiment with it. She’s not only a great coach, but a great friend.”

And there’s nobody better at taking care of business, Brinson said. “She makes everything as easy as possible. She handles all the red tape behind the scenes.”

On any given day, that might mean hauling equipment to practice sites. Making travel plans for national or international tournaments. Or soliciting grant funding from organizations such as the Mississippi Department of Rehabilitation Services, Mississippi Paralysis Association, Challenged Athletes Foundation and the Neilsen Foundation.

At Methodist, Boydston works mainly with spinal cord injury patients. And she says the newly injured are often unreceptive at first. “It takes a period of time for them to realize they can still do whatever they want,” she said.

And once they do, Boydston is quick to come up with a game plan.

“She’s the type of a person if she doesn’t have the kind of activity someone wants to do, she’ll find it for them,” Brinson said. “Fencing has taken me all over the world, and I was introduced to the sport by a clinic Ginny set up. She’s very good at what she does and you can tell she loves it.”