A daily dance: Quest Program provides JSU student the tools for coping with lupus after surviving a stroke due to the autoimmune disease 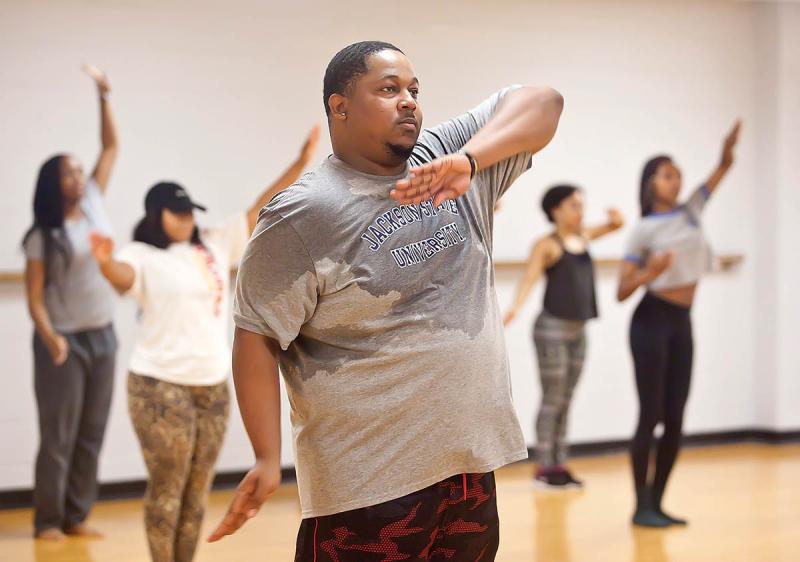 Martez Baldwin practices with the Jackson State University dance ensemble, as they prepare for their first performance of the school year. / Photo by Melanie Thortis 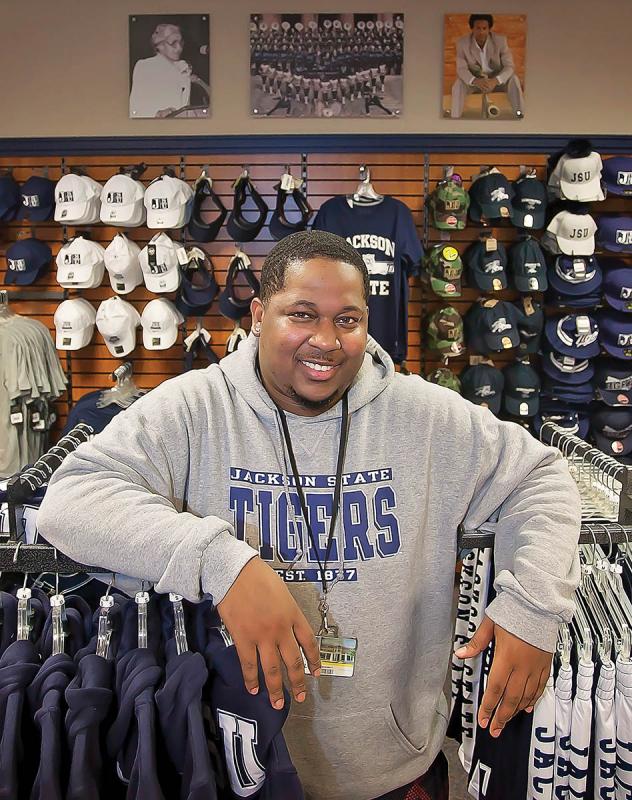 Martez Baldwin is back to his part-time job at the Jackson State University bookstore. / Photo by Melanie Thortis

The members of Jackson State University’s dance ensemble give each other nicknames to reflect who they are and what they’ve been through.

“They say I’m indestructible because I’m not letting anything stop me,” Baldwin said. “And the paid part, they said that’s because I’ve paid my dues.”

Baldwin, 27, has lived most of his adult life under the shadow of lupus, a chronic autoimmune disease that attacks healthy cells in the body.

“What’s so hard about lupus is its unpredictability,” said Cecile Morvan, a clinical psychologist at Methodist Rehabilitation Center. “One thing that really causes it to flare up is stress. But how do you avoid stress, especially in college?”

Morvan served as Baldwin’s primary therapist at MRC’s Quest program. The program helps people make a successful return to work, school or home life following a brain or spinal cord injury. Baldwin entered the program in February after suffering a stroke due to lupus.

“Martez struck me as someone who is very determined, who will persevere,” Morvan said. “It’s got to be pretty scary to live with that sort of specter, that at any time you can have a flare.”

Baldwin did his best to manage his disease, knowing that lupus could bring his college grind to a halt at any time. It did just that right after Christmas last year.

“I really don’t remember what happened,” he said. “All I remember is on Dec. 31 we went to church for the Watch Night service. The next thing I remember is I’m in the hospital seven days later on Jan. 8.”

The day after the church service, Baldwin was acting erratically and unresponsive to questions. His roommate and best friend Mary Yancy called his mother, and they took him to the hospital. The hectic nature of the holidays had caused a lupus flare-up, which in turn led to Baldwin suffering an ischemic stroke. This type of stroke occurs when blood flow to the brain is restricted, depriving it of oxygen.

“I knew I was getting sick, I had felt myself getting weak,” Baldwin said. “I was always sleepy, which is a sign I’m going into a flare. But it was the holidays, so I just wasn’t thinking about it.”

Baldwin was first diagnosed with lupus in 2009. At that time, he was living in North Carolina, had just finished high school, and was excited to start college at nearby Winston-Salem State University.

“Two weeks before school started, my older sister took me to an amusement park,” Baldwin said. “We enjoyed ourselves, but later that day I noticed I had red bumps on my arms. We thought maybe we stayed in the sun too long.”

The next day, after developing a fever, Baldwin went to the ER. Probably a virus, they said, and sent him home. A week later, he was feeling worse, so he went back. A bad case of the flu, they said.

“Then the week school was supposed to start, I was too sick to go and I had started losing weight,” Baldwin said. “We knew something wasn’t right, so they finally admitted me into the hospital. After about three days there, the doctor came in and told me I had lupus. And my first reaction was, ‘what is lupus?’”

Lupus affects an estimated 1.5 million Americans, according to the Lupus Foundation of America. It mainly affects women of childbearing age, and is two to three times more prevalent in women of color. The foundation estimates 1 in 537 young black women are affected. Though much rarer, men can also develop the disease around early adulthood, as Baldwin did.

Because the disease is an autoimmune disorder, its symptoms are all over the map, ranging from joint pain to hair loss to more serious issues like cardiovascular disease and stroke. A recent study by the Lupus Center at Boston’s Brigham and Women’s Hospital found evidence that people with lupus are two to three times more at risk for stroke and heart disease.

“Basically your healthy cells are fighting themselves,” Baldwin said. “I thought maybe I had jinxed myself because I always told people I had a strong immune system.”

When Baldwin transferred to MRC’s inpatient rehab in late January, he began to regain the strength the stroke had taken from him.

“In therapy, we mainly worked on my left side,” he said. “My strength was gone—I couldn’t even pick up a half-gallon of milk without my hand shaking. It felt so incredibly heavy for some reason.”

After a week of inpatient therapy, Martez was referred to the Quest program so he could achieve his goal of getting back to school and his job at the campus bookstore.

“I was supposed to graduate this coming December. But since I missed all of January, that wasn’t going to happen,” Baldwin said. “But when I came to Quest, they told me they would get me back to school and back to working.”

“Martez is very friendly and sociable, so he was really looking forward to getting back to school and being back with his friends,” Morvan said.

Morvan worked with Baldwin to develop mechanisms for coping with his disease, as well as stress management techniques to prevent future flares.

“Martez has really managed to keep a positive attitude in light of what he’s been through,” Morvan said.

“The main thing I focused on with Martez was general endurance and conditioning,” Oyarce said. “I knew that he wanted to go back to the dance ensemble, so I focused on making that possible.

“We did a lot of high-level balance and conditioning activities. I taught him interval training to help build cardiovascular conditioning—meaning you do bursts of high-intensity exercises for two to four minutes and then you do a lower intensity, and then you come back.”

Baldwin at first wasn’t sure how the therapies would get him back into dancing shape.

“At first I was like, what is this for? But as time went on, I could see where she was going with it,” Baldwin said.

Now back at JSU, Baldwin is pursuing his life plan that was inspired by a certain famous TV moderator.

“I want to be a crime scene investigator, then after I have a few years of that under my belt, I want to go to law school,” Baldwin said. “Then I want to work as a lawyer and eventually retire as a judge. That’s my plan. It’s always been my plan since I was like, 12. I can thank Judge Judy for that.”

He’s also back to work at the campus bookstore, where his outgoing personality charms both customers and coworkers.

“Martez is a great person and a great worker, and he was sorely missed when he got sick,” said JauJuana Watts, operations manager at the JSU bookstore. “Now that he’s back and we are all conscious of his illness, we try not to overexert him. So far he’s able to do a lot.”

He’s also back to rehearsing with the JSU Dance Ensemble, which had its first performance of the school year in September.

“I think Martez is very aware of what he has to do and how he has to be very careful to manage his condition,” Morvan said.“But he’s not going to let that stop him from reaching his goals.”