The flip side: Prominent ob/gyn doc finds herself on the opposite end of the doctor-patient relationship after being paralyzed by a rare syndrome 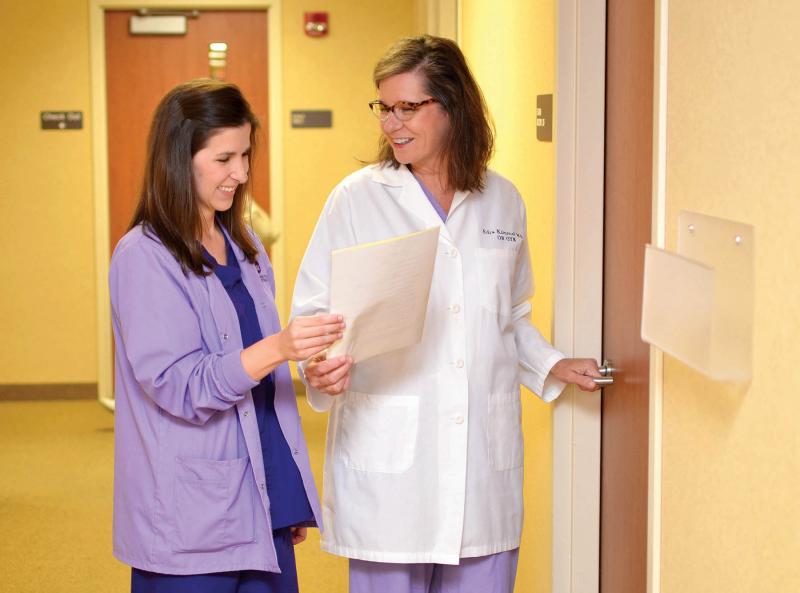 After months of being off work, Dr. Edra Kimmel, right, is back to a busy schedule of seeing patients with the help of registered nurse Kristen Weaver. 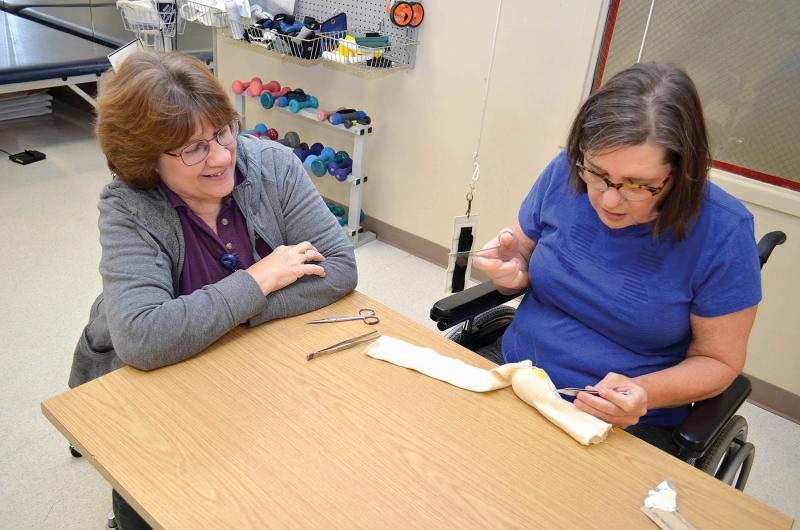 To help Dr. Edra Kimmel get back to her doctor duties, Methodist Rehabilitation Center occupational therapist Debbie Webb, left, had Kimmel practice suturing a slit in a stuffed sock. 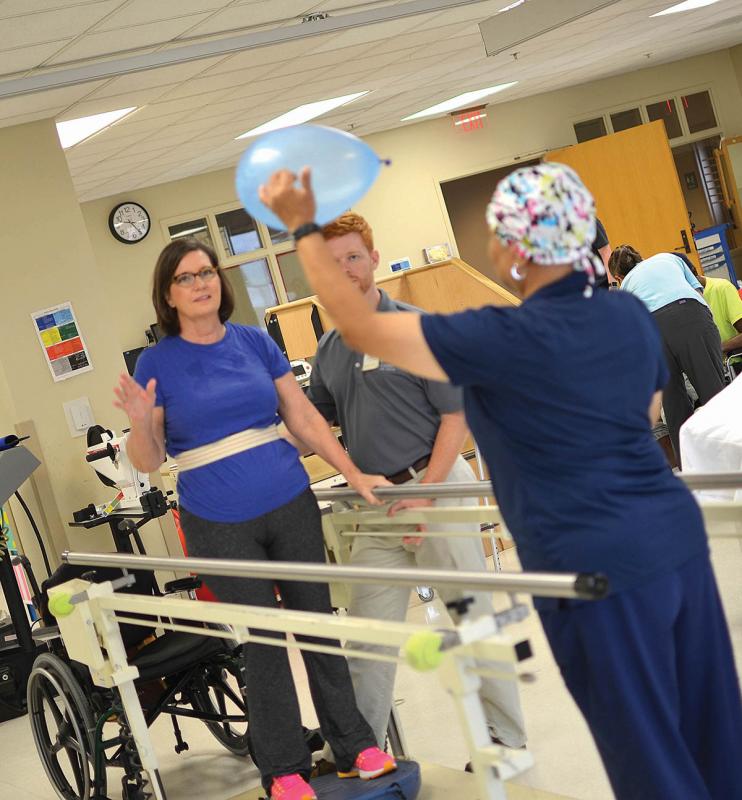 Bopping a balloon while standing on a BOSU balance trainer is one way Dr. Edra Kimmel improved her balance while working with physical therapist Chris McGuffey, center, and therapy technician Betty Dorsey-Wilson, right. 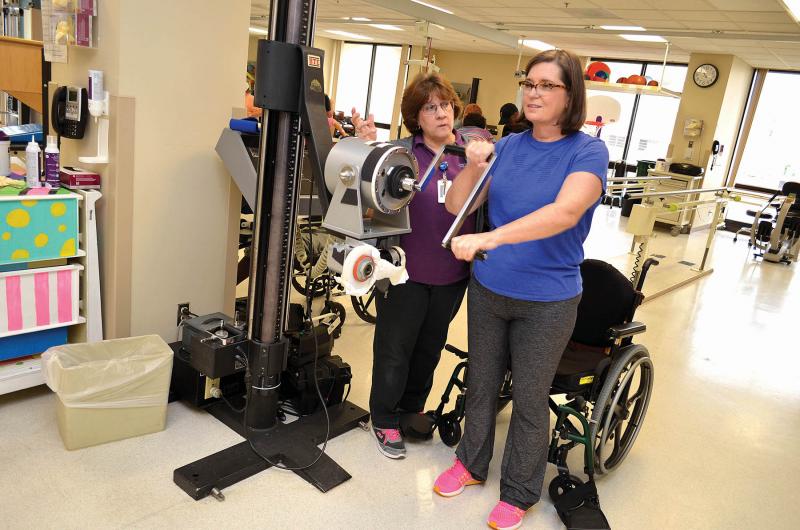 Occupational therapist Debbie Webb, left, said Dr. Edra Kimmel embraced every form of therapeutic exercise as she put everything into reclaiming her career.

In the summer of 2016, Dr. Edra Kimmel was living the hectic life of a popular obstetrician/gynecologist.

She had patients to see, babies to deliver and surgeries to perform. So when she began feeling achy and feverish, she refused to let a few flu symptoms slow her down.

“I was too busy to deal with anything,” she said. But a couple of weeks later, she had to cry uncle.

“I woke up with complete right facial paralysis, both legs were completely numb and my abdomen felt like a girdle of numbness,” she said.

Kimmel thought she’d had a stroke. But the culprit wasn’t nearly so common.

At the hospital, physicians diagnosed Guillain-Barre Syndrome, a paralyzing disease that strikes only one or two people per 100,000.

GBS occurs when the body’s immune system attacks myelin, the insulation that surrounds and protects nerve fibers. The resulting damage temporarily disconnects communication between the brain and muscles.

It’s also possible Kimmel was paralyzed by the West Nile virus itself. A polio-like illness is one form of the mosquito-borne disease and it’s often mistaken for GBS, said Dr. Art Leis, a renowned West Nile virus researcher at Methodist Rehabilitation Center in Jackson, Miss.

“There’s a fine line between those two diagnoses,” Kimmel said. But as a pragmatist, she wasn’t fixated on what caused her paralysis. Her focus was on how to overcome it.

“I just knew I needed a really good inpatient rehabilitation facility,” she said. “So I asked to be evaluated at Methodist Rehab.

“I always heard good things about the facility, the staff and the intensity of the therapy. I was certainly willing to be as intense as I needed to be because I expected a full recovery and a return to my practice. And I wanted the best shot to accomplish that.”

Today, Kimmel is fully back to her Flowood, Miss., gynecology and surgical practice.

And it’s an astonishing turnaround considering her condition when she first arrived at Methodist Rehab on July 13, 2016.

“I was confined to a wheelchair, and I couldn’t do anything for myself,” she said. “Thankfully, I had wonderful support from my husband, daughter and son. I didn’t spend one night alone during the 10 weeks I was hospitalized.”

Weak as she was, Kimmel was a bit taken aback by her first day in the therapy gym.

“When (physical therapist) Chris McGuffey told me he was going to take me out of my wheelchair and put me on the mat on my hands and knees, I laughed. I said, ‘I can’t feel my legs.’ And he said, ‘Just trust me.’”

Kimmel ended up swaying into McGuffey’s lap. But as she got to know her therapy team, “trust came very quickly,” she said.

“I think it’s because they’re so well-trained,” she said. “Each day, I was amazed what they were able to do with me. I would wake up before sun-up, and I was excited to start the day.”

Maybe a little too excited, said McGuffey. “She would ask for extra therapy and that made it hard for us not to over-fatigue her,” he said.

To counter the extreme weakness that impaired Kimmel’s ability to sit or stand, McGuffey focused on improving her core strength. “That’s why to this day she sends me photos of her doing Pilates,” he said.

“Initially she was unable to perform fine motor skills, and she was worried she wouldn’t be able to go back to work,” Webb said. “So one of the things we did was set up a way for her to practice sutures. We stuffed a sock and put a slit in it. And she used her suture kit to suture it up.”

Kimmel was obviously determined to reclaim her career, said her therapists. “You didn’t have to find her for therapy, she would memorize her schedule,” McGuffey said.

Kimmel also made it clear that visitors weren’t welcome during her therapy time. “She was so focused on getting better she didn’t want anything to distract her,” Webb said.

Nor did she want to indulge in any negativity. “I did not want to get disenchanted or discouraged,” she said. “I wanted to be positive and believe I would recover. As long as I was making progress, I felt good about where I was.”

But she admits it took some time to adjust to the incremental nature of the rehabilitation process. “I kept saying I didn’t need to learn certain things because I was going to get well. And they would say: ‘Today, you are where you are, and we have to teach functions at your current capacity.’ “That was a little disconcerting. But very slowly, each day I realized I could do a little more and a little more.”

Kimmel set a goal of walking out of Methodist Rehab. And after six weeks of hard work, she did just that with the aid of a walker. She moved to outpatient therapy on Aug. 19, 2016. And once again, she was all about returning to her career.

“She was obviously driven in the medical field and that’s how she was in therapy, too,” said Ann Howard, her physical therapist at Methodist Outpatient Therapy in Flowood.

“She knew what her main goal was, and she always wanted to know the purpose of each therapy,” said MRC occupational therapist Sydney Sisson.

For one activity, Sisson tossed weighted balls to Kimmel while she perched on a rolling stool. “That was to practice balance and try to simulate the movements that occur while delivering a baby,” Kimmel said. “It is not a ‘one pull and you are done’ process.”

Sisson also accompanied Kimmel to a nearby hospital, where she practiced robotic surgery techniques.

With Howard, Kimmel concentrated on improving her core strength, balance and walking ability. “We have a body weight-supporting treadmill, and she would work on pelvis control,” Howard said. “And we would do work simulations, too. I’d have her carry charts and walk and turn and go in and out of rooms.”

While Kimmel’s background as a physician turned out to be an asset, “initially it was a hindrance,” she said. “My mind knew way too much, and I wanted instant results. I wanted to be well. But in the long-haul of recovery, it helped.”

“She was very aware of her body and things that were not functioning properly,” Howard said.  “She taught us as much as we taught her,” Sisson added.

Altogether, Kimmel spent four months in outpatient therapy. She supplemented those sessions with twice-weekly Pilates workouts. And her diligence paid off.

“She came into therapy in a wheelchair,” Howard said. “Then she went from wheelchair to walker to rollator to forearm crutches to walking independently at the time of discharge. Her balance also improved from a high fall risk to a perfect score on the Berg Balance Test.”

Kimmel progressed rapidly in occupational therapy, too, and soon began easing back into her work schedule.

“When I first came back to work, it was just for three hours one day a week. But it was a start,” she said. “Over the course of two months, I worked up to the traditional four and half days a week.”

“It was a big day when she did her first procedure,” Sisson said. “We all celebrated it.”

Kimmel said she owes a lot to those who supported her efforts to reclaim a career she loves. “I am so thankful for my ob/gyn partners at Jackson Healthcare for Women and their willingness to add all of my patients into their schedules and absorb all my remaining ‘on call’ nights and weekends without hesitation.”

Today, Kimmel believes she’s a better physician for having been on the flip side of the doctor-patient relationship. “Definitely it has rejuvenated my compassion and improved my level of patience as a physician,” she said. “I’ve learned that some people just need for us to sit and listen.”

And she’s also gained a healthy respect for the damage one tiny mosquito bite can do. “People don’t think it can be serious, but it can,” she said.