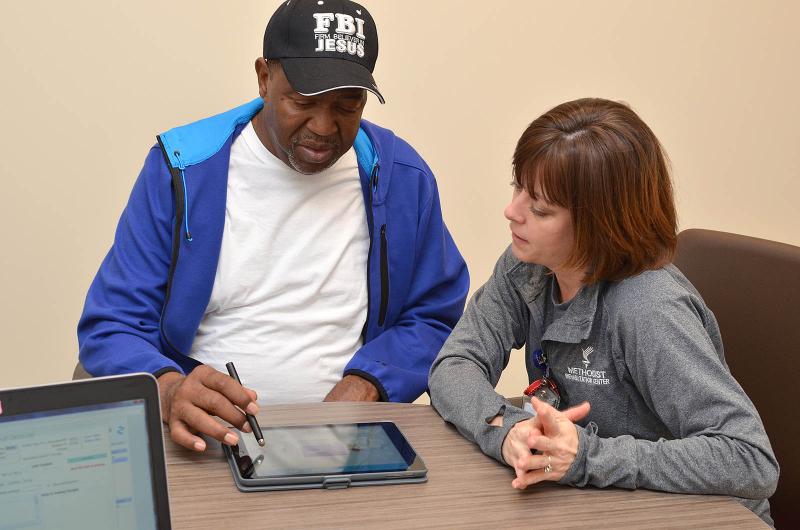 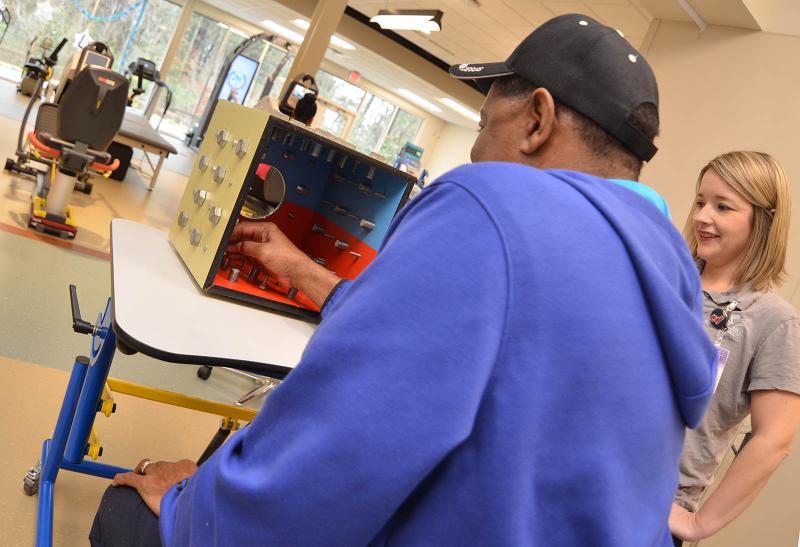 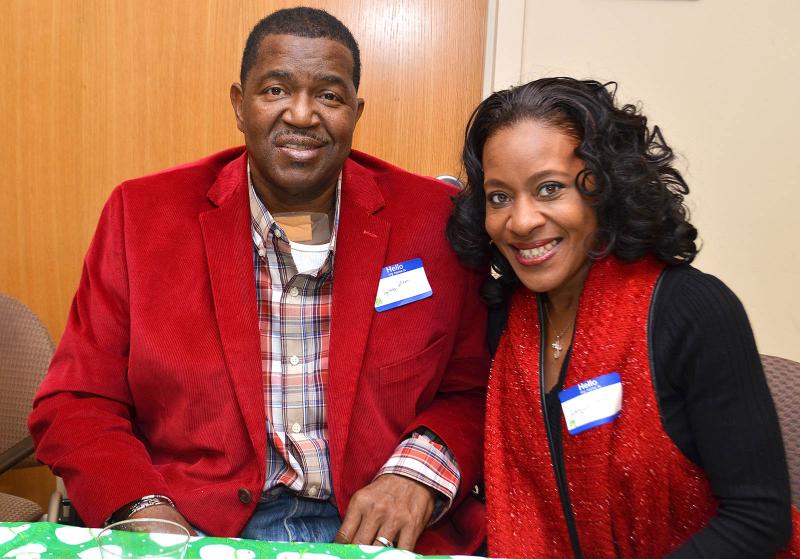 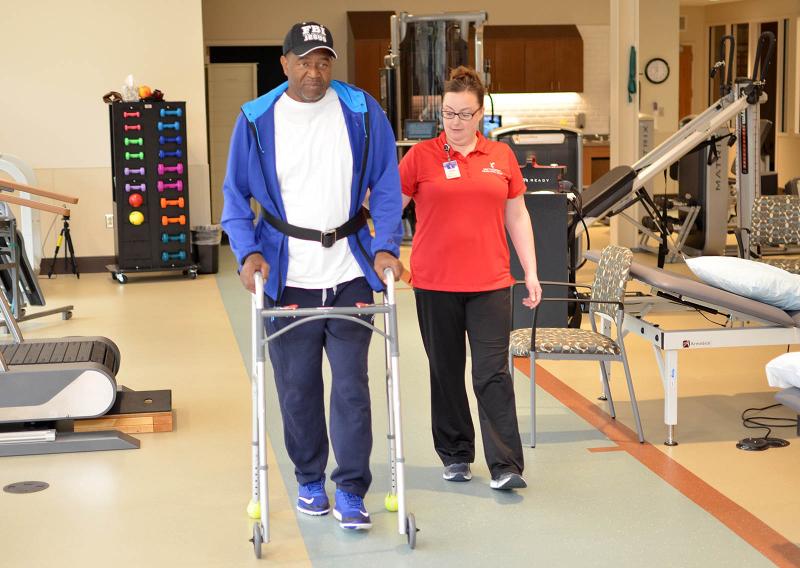 Spencer Gunn spent two touch-and-go months in a Memphis hospital after a brain-injuring aneurysm. But his wife Jacquelyn never lost hope he would get better.

“First, they had told me he only had a 2 percent chance to live. Then, when he left the ICU, they said he didn’t qualify to go to rehab,” she said. “They said he could either go to a nursing home or home. I told the doctors that I wasn’t going to leave the hospital until my husband gets some therapy.”

On paper, Spencer’s health had led to rejections from out-of-state rehab centers. But the Gunns’ prayers were answered when Le Downing, an outreach nurse for Methodist Rehabilitation Center in Jackson, was able to meet with them and see firsthand Spencer’s potential for recovery.

“Le just walked in the hospital one day,” Jacquelyn said. “I just feel like God sent her to us. And I thank Him for that.”

“When I walked into the room, I knew that Mr. Gunn would benefit from rehab at MRC,” Downing said of the hospital that specializes in treating brain injuries and other disabling conditions. “Although the documentation did not look good, he looked great during the on-site evaluation.”

After the surgery to clip the aneurysm, Spencer, 58, had suffered from meningitis and fluid buildup in his lungs. He spent over a month on a breathing machine. He was still not able to speak or communicate effectively and was mostly bedbound.

“But he had a huge smile on his face and it lit up when his wife would speak to him,” Downing said. “You could see in his eyes that he had had it in him to get better.”

“That first week he was there, that’s when everything turned around for him,” Jacquelyn said.

When he left inpatient after 30 days, Spencer was walking with assistance and talking again.

“After I saw that change, after seeing him for two whole months able to do nothing, I said a prayer,” Jacquelyn said. “I said, ‘Lord, if it be your will, you will make a way for us to get a house down here for him to continue to get therapy here.’”

The Gunns had been living in Guntown, a north Mississippi community near Tupelo. Jacquelyn soon found a place to rent in Madison, where the two now reside so she can take him to his sessions at MRC’s Outpatient Therapy clinic in Ridgeland.

“She told me she wanted to stay with Methodist because she had a great experience with us, and because she understood that not all outpatient clinics are geared toward neuro-recovery,” said Bonnie Lahuta, who served as Spencer’s inpatient occupational therapist.

Back when Spencer first arrived at MRC, he was still wearing a tracheostomy tube for breathing as well as a feeding tube. He was unable to stand on his own or speak. So Lahuta and physical therapist Kaitlin Ingram knew they had their work cut out for them.

“The first morning he was here, he didn’t really respond, other than eye movements, to anything we said to him,” said Lahuta. “Kaitlin and I just looked at each other and said, ‘What are we going to do with someone who is only moving their eyes?’”

At first, they had to use the hospital’s overhead lift system and a wheelchair to get Spencer to and from therapy. But, as Jacquelyn said, during that first week things began to turn around.

“Then there was just a sort of lightbulb moment, where all of a sudden he started doing things again,” Lahuta said. “You could tell that he wanted to communicate verbally but just couldn’t get his tongue to cooperate. When he started responding to our prompts and cues, we knew he’s in there. We’ve just got to get him out.”

Lahuta started by focusing on helping him with everyday tasks like dressing, grooming and feeding himself.

“His right side was significantly impaired, it was really tight,” said Lahuta. “I worked a lot on regaining movement in that shoulder, mainly because it was a struggle even getting dressed at first.”

Ingram focused on getting Spencer standing up so that they could ease their way into walking.

“The first day, I put him on the tilt table to slowly progress him to get used to standing upright,” Ingram said. “That definitely woke him up, and I could tell he had some movement that I could work with. From there we moved to the standing frame, and before long he was taking steps supported by the lift system in the gym.”

When it was time to leave and go to outpatient, Jacquelyn knew there was only one choice to continue Spencer’s progress.

“Most outpatient therapy clinics focus on orthopedic conditions, and they don’t see brain injuries on a daily basis like they do at our clinics,” Lahuta said.

“They also don’t have access to the types of specialized neuro-recovery equipment that we have at our clinic,” said occupational therapist Jessica Martinez, who has been working with neurological patients almost exclusively for 15 years.

Martinez has been working with Spencer at outpatient for over a month now, and says he continues to improve.

“Now he is really making use of his right arm when we are doing tasks,” she said. “He is steadily using it more and able to reach a lot higher, and he has gotten about half of the range in his shoulder back.”

Spencer also continued his physical therapy and has progressed to walking without assistance.

“Mr. Gunn's recovery has been nothing short of amazing,” Downing said. “Ms. Gunn sent me a video of Mr. Gunn walking and singing. The video brought tears to my eyes. The support and love she has for him would encourage anyone to better themselves.”

Regaining his speech remains the most difficult hurdle for Spencer, and he continues to work with speech therapist Heather Wise at the clinic.

“Communication, getting his thoughts across, finding words—all of these things have improved since he started therapy,” Wise said. “Things are moving in the right direction, and I think he will continue to progress over time.”

Spencer, a retired supervisor for the city of Tupelo, had embarked on a second career preaching at Greater Ebenezer Baptist Church in nearby Aberdeen. Though it remains to be seen if he will return to the pulpit, the Gunns know he will continue to do the Lord’s work.

“I’m not going to say that I know he won’t ever be back to where he was, because I know what kind of God we serve,” Jacquelyn said. “I told Spencer when he was in the hospital, this is just our sabbatical. God has given you rest, and He is going to bring you out of this to help other people. He is using you right now, to show people that there is a God, and what He can do.”