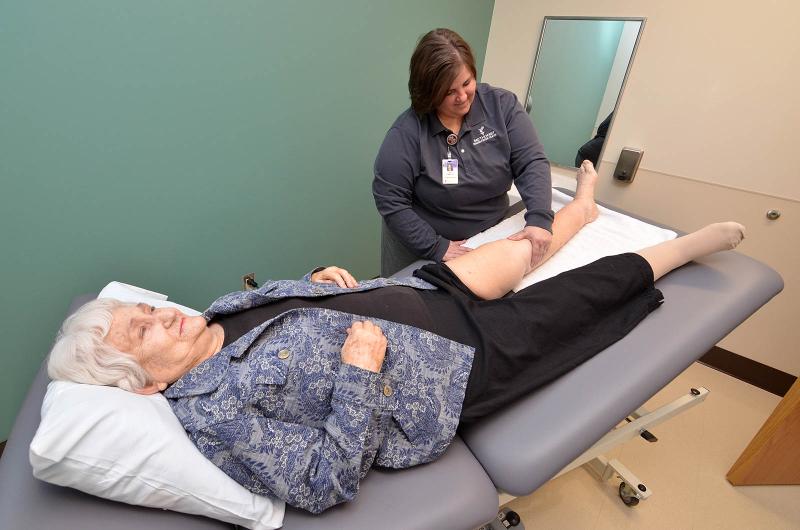 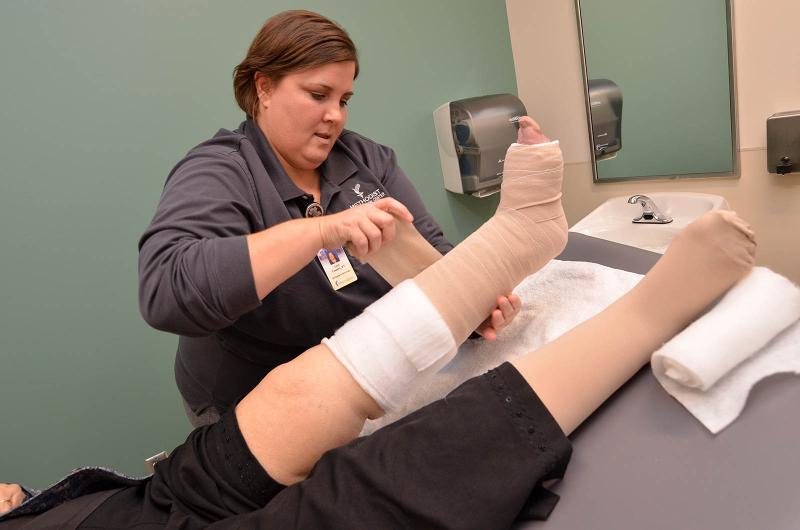 Certified lymphedema therapist Lori Towery of Methodist Outpatient Therapy in Ridgeland wraps Carol Cannon's lower left leg with a special bandage that prevents the swelling caused by lymphedema to return to the limb.

When Carol Cannon of Ridgeland was diagnosed with lymphedema, she had never even heard of the condition that was causing swelling in her lower legs so severe she couldn’t wear shoes.

“It’s bothered me for at least eight years,” said Cannon, 81. “I’d been to several doctors. They thought the swelling was from my heart, then my veins. They tried me on strong diuretics. I just figured nothing was going to help me.”

Finally, her family doctor recognized the condition and referred her to Methodist Outpatient Therapy for Complete Decongestive Therapy (CDT), a proven treatment for managing the condition. The Ridgeland clinic will offer free screenings for CDT on Feb. 27.

“Lymphedema can be somewhat difficult to diagnose because it’s not identifiable just by swelling, but also how the skin looks and feels,” said Lori Towery, a certified lymphedema therapist who administers the treatment. “But if you have seen it before, you don’t forget what it looks like. And many doctors may have seen it but did not know there was an effective treatment for it.”

Lymphedema is caused by a damaged lymphatic system, which can occur from certain cancer treatments. But Cannon thinks an illness long ago is to blame.

When working as a missionary in New Guinea in her early 20s, she became very ill and nearly died from filariasis, a rare, tropical parasitic disease that affects the lymph nodes. Cannon said she has dealt with after effects all her life, such as sensitivity to extreme heat.

“But lymphedema never really started to affect her until after she had both hips replaced and she became less mobile,” Towery said.

There is no cure for lymphedema, but it can be managed with proper care—that’s why CDT is a combination of treatment and education on managing the condition.

First, swelling is addressed by facilitating the movement of fluid using manual lymphatic drainage, which Towery likens to a gentle massage. Then, to prevent the swelling from returning before the next session, the limb is wrapped tightly with special bandages.

“They may look like typical Ace bandages, but these don’t expand, they work to compress,” Towery said.

This treatment is administered daily until the limb is back to normal size. For long-term management, patients are then fitted with compression garments and educated on self-care.

“CDT has been great,” Cannon said. “Just the difference from when I first came in—I couldn’t even see my ankle bone on my right leg, it was so swollen. It has been a tremendous help.

“I haven’t seen my family doctor since I started this treatment, but I have an appointment in March. So I’m excited to go back and tell him all about it.”

Free screenings for Complete Decongestive Therapy (CDT) will be held Feb. 27 at Methodist Outpatient Therapy in Ridgeland. Persons who have been diagnosed with lymphedema, or have swelling in the arms or legs, particularly after cancer treatment, may be a candidate for CDT. To schedule your free screening, visit methodistonline.org/CDTscreening and fill out the secure form, or call 601-984-8700.