‘Methodist became my family’: After losing his leg in an ATV accident, Sebastopol teen Chandler Norman got an education in the world of prosthetics 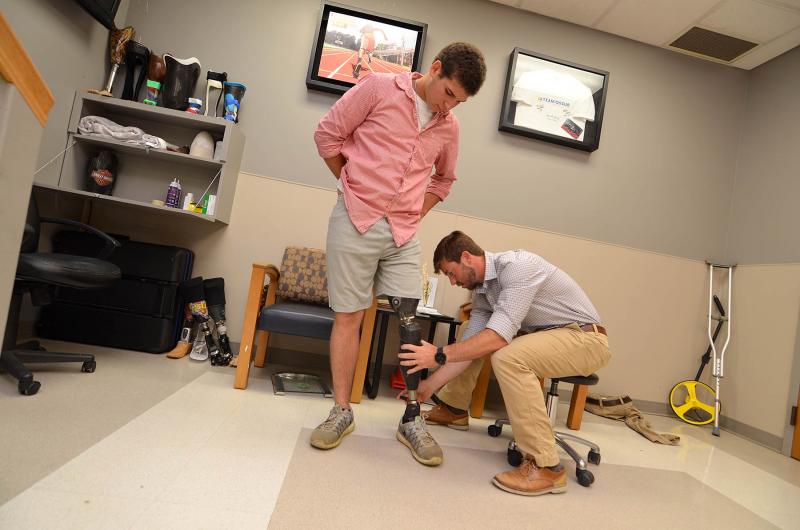 Methodist Orthotics & Prosthetics certified prosthetist Taylor Hankins adjusts the prosthesis of Chandler Norman of Sebastopol during a recent check-up at the Flowood clinic. 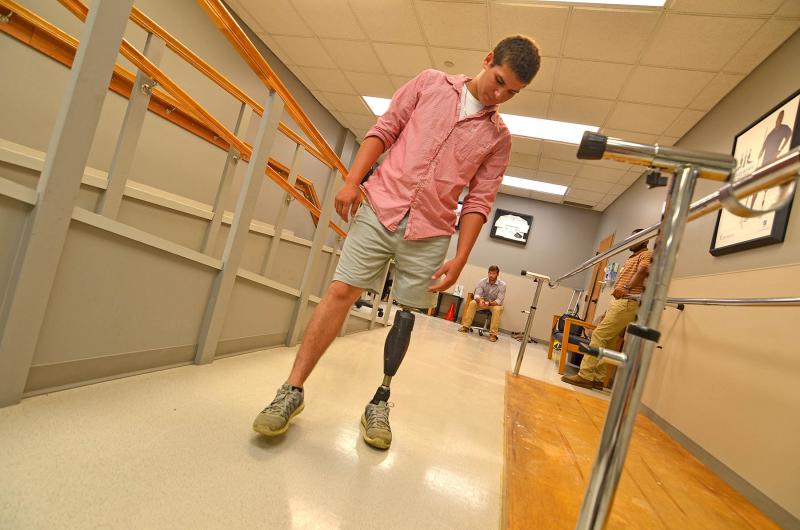 After some adjustments, Chandler Norman of Sepastopol walks back and forth to test his prosthesis in Methodist Orthotics & Prosthetics “gait room” at the Flowood clinic. 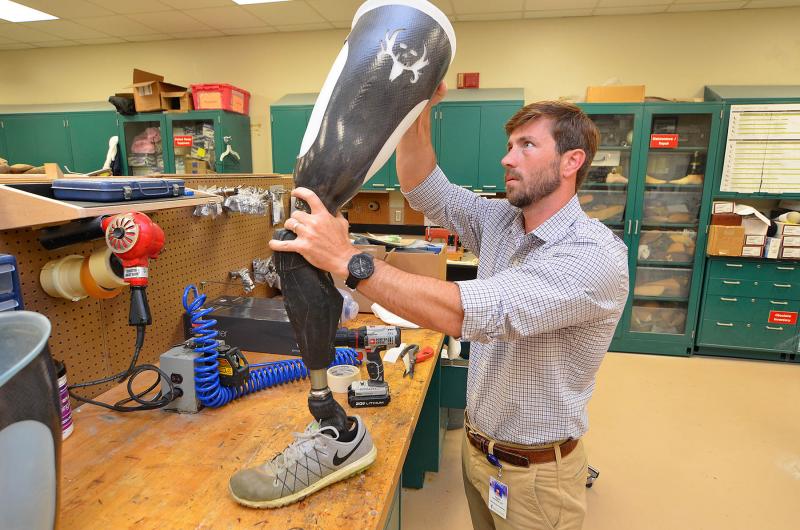 When it was time to pick a topic for his high school senior project, Chandler Norman wanted to learn more about the world of prosthetics.

And with good reason. The 18-year-old from Sebastopol had his left leg amputated above the knee following an ATV accident in early 2016. He then learned to walk again with a custom prosthetic leg built by Methodist Orthotics & Prosthetics in Flowood.

“We had to find a job we liked and research and write about it for our project,” Norman said. “I thought it would be pretty cool to get to come to Methodist O&P and work with them and see how they do things. I’ve always liked working with mechanical things.”

“I can’t think of another patient who has made their own prosthesis,” Hankins said. “When Chandler wanted to do his senior project on prosthetics, I knew it would do him a lot of good to know what all goes into it, because he will likely be living with a prosthesis the rest of his life. We signed him up as a volunteer so he could come in. I supervised all the aspects of it, but he built his own socket, start to finish, completely hands-on.”

Norman might be a familiar face to some. Grateful for blood transfusions that saved his life, he has appeared in ads for Mississippi Blood Services.

“Chandler had such an immense need for blood,” said Emily Austin, marketing and communications director for MBS. “He made a very profound statement on all of our hearts as we watched his story and struggle and how he came back from his accident so amazingly.”

It’s a story Norman recounts in a TV commercial for MBS. The ATV accident, which happened on a remote game reserve near Forest, crushed Norman’s left leg and tore his femoral artery. During transport to the University of Mississippi Medical Center, Norman nearly bled out three times. His amputation led to nine surgeries in as many days. In all, he spent 48 days in the hospital and received 56 units of donated blood.

“Chandler started out very impaired and had a lot to overcome,” said Karen Klein, a physical therapist at Methodist who has over 18 years of experience working with amputees. “He had a lot of issues with pain in the beginning. He could be very hard-headed, and he got frustrated when walking with the prosthesis didn’t come easy to him. But once he put his mind to it, and we figured out how to properly motivate him, he really took off with it. He came to love everybody here, and he would stay just to hang out after his therapy appointments. He would talk to the other patients. He became an inspiration for everybody in the clinic, from the young to the old.”

Norman admits it wasn’t an easy road to recovery.

“They told me my amputation was pretty traumatic, and I had to go through a lot of healing,” Norman said. “But I knew I would do whatever I had to do to walk again with a prosthetic leg. I never had any doubt in my mind that I would walk again.”

“In my job you get to see where people start and where they end up,” said Hankins. “Though I may know they’re going to succeed in their rehabilitation, they may still be questioning that themselves. We are there to help them get to that point, and it’s always a big celebration. What was different about Chandler was, he never questioned if he was going to do well. In his mind he knew that he would, he just had to make his way through the process.”

Before the accident, Norman was a go-getter. At Sebastapol High School, where he graduated from in May, he played football and always held down a job. Today, he works part time for his grandfather’s landscaping business, part time at a local hardware store, and is an avid outdoorsman.

Klein developed her treatment plan with that active lifestyle in mind.

“He never stays inside, he is the type that is always on the go,” Klein said. “So we kept taking him outside to try and simulate his environment and what he did all day every day. His mom told me that he only ever came inside to sleep and eat.”

Hankins also chose a unique prosthetic knee to fit Norman’s lifestyle. The Otto Bock X-3 is a waterproof knee that was developed in conjunction with the U.S. military for soldiers to use in the field. Hankins knew its rugged design could help Norman get back to the life he loved, while also taking every ounce of punishment an energetic teen could dish out.

“One of the challenges in my field is finding the components that can match the ability of the patient wearing them,” Hankins said. “Somebody as young and active as him needed something pretty robust, especially so he doesn’t have to keep coming back for me to repair something. The X-3 fit because, like Chandler, military guys need something out in the field that can stand up to whatever they put it through.”

Norman was just learning to walk again when there was a setback. Hetereotopic ossification, a rare condition that only affects 7 percent of lower extremity amputees, caused his femur bone to regrow and protrude from the residual limb.

“Just when I was starting to get the hang of it, I got a knot on my leg that kept bulging out, so I went back to the doctor,” Norman said. “It wound up being bone growing out of the end of my femur where they had cut it.”

“I did everything I could to accommodate it prosthetically,” Hankins said. “But, unfortunately, the pain associated with it has no prosthetic cause, so there is no prosthetic solution.”

“So I had to go back for another surgery,” Norman said. “But after I got over that I was finally walking, and we really started working.”

Because Methodist O&P and Methodist Outpatient Therapy are right next door to each other, Hankins and Klein can work together closely to ensure the proper fit and comfort for their patients’ prostheses.

“We’re both in the same place at the same time,” Hankins said. “I’m fine-tuning the prosthesis, and she’s working on the muscles that drive the prosthesis. So having the two of us there to address the two things simultaneously is huge.”

This collaboration helps to speed up what can sometimes be an arduous process.

“A lot of times we would have to go back to the drawing board,” Klein said. “I’d see things that weren’t working right, and I’d go get Taylor to help us work through it. There can be a lot of trial and error, but we finally got something to fit him well.”

“We fine-tuned it to work perfectly to meet all of his needs for him to be successful and independent as a student with a job, an outdoorsman, and as a busy teenager on the path to college,” said Hankins. “If we ever had a problem, Karen would come right over and grab me. It’s great that Karen was able to connect with him and find a way to motivate him. She got him to really work as hard as he possibly could.”

Norman, who received scholarships through 4-H, plans to attend East Central Community College in the fall to study nursing. But he says he doesn’t want to stray too far from home and the team that helped him get back on his feet again—just in case his leg ever needs a tune-up.

“Taylor and Karen are awesome,” Norman said. “I wouldn’t ever go anywhere else. They’ve always treated me right. Methodist became my family.”