Out of the blue’: Methodist Rehab helps former Mississippi State quarterback Greg Plump get back to his life as park ranger after being sidelined by an unexpected stroke 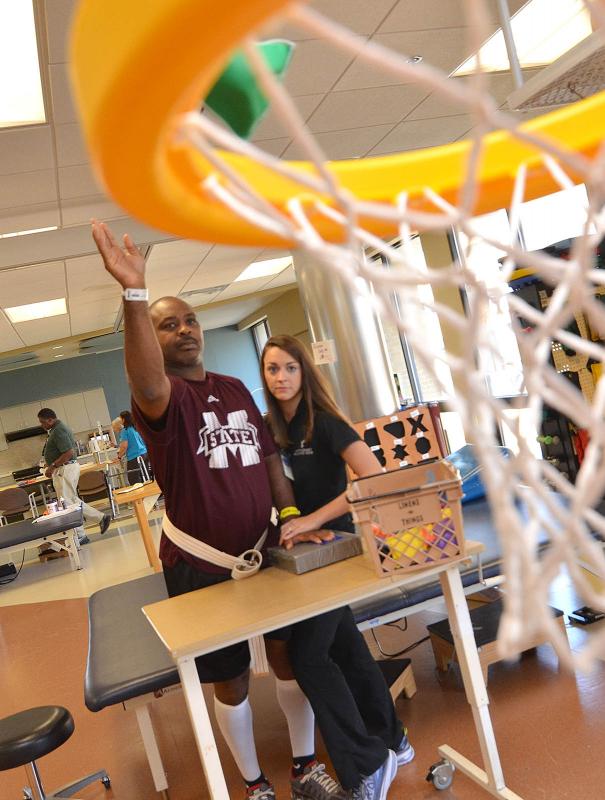 Methodist Rehabilitation Center occupational therapist Sarah Boyd had Greg Plump throw bean bags into a basketball hoop, while supporting his weight with his weakened left side to strengthen it. 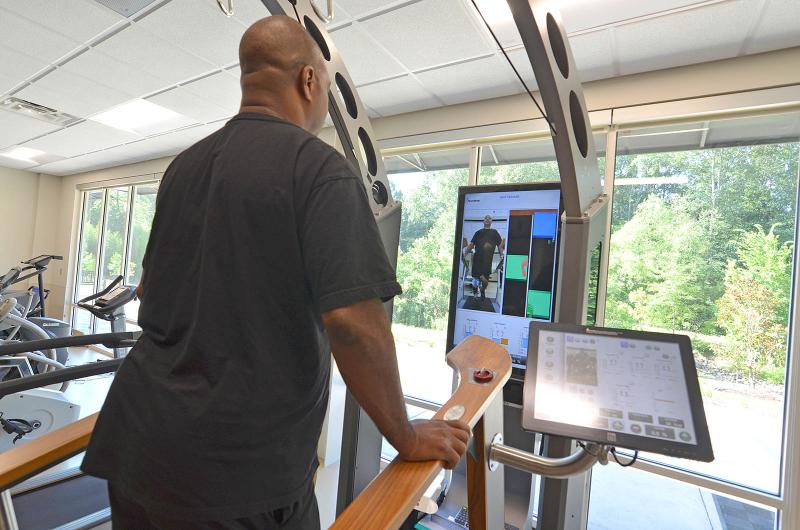 At Methodist Outpatient Therapy in Ridgeland, Greg Plump walks on the clinic’s Walker View treadmill, which analyzes and provides feedback on his gait in real time. 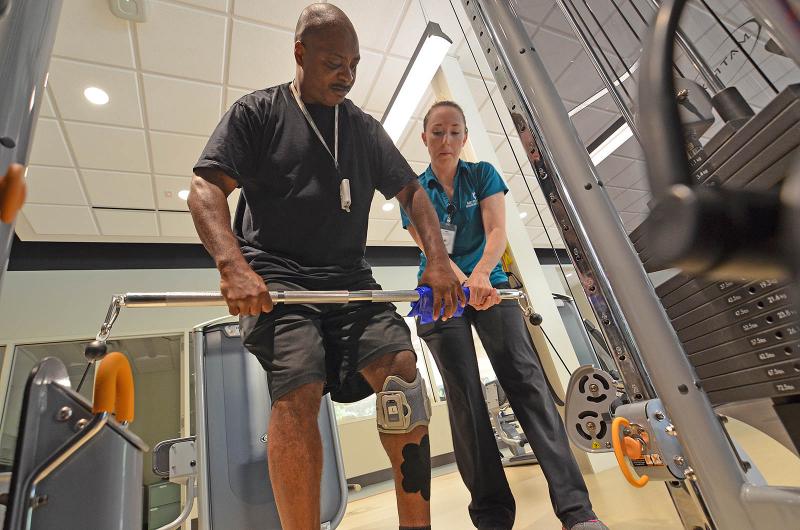 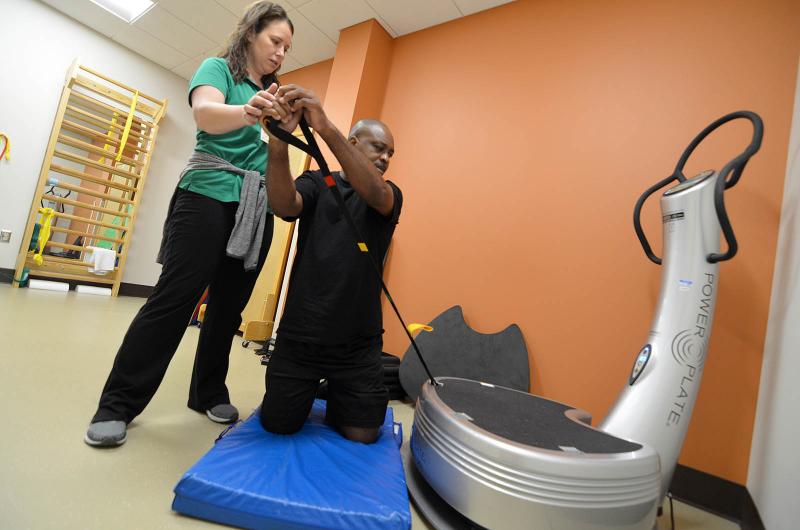 The thought of having a stroke in his 40s had never really crossed Greg Plump’s mind.

“It just came out of the blue,” said Plump, who is 48. “I was working out every day and I tried to eat healthy.”

Plump has always been fit and athletic. A former Mississippi State University quarterback, he’s best remembered for taking over after Sleepy Robinson was injured in the 1992 season.

“I was just sitting at home watching a football game with a friend of mine,” Plump said of the night of Sept. 15, 2017. “She noticed that my face started drooping and said, ‘I think you’re having a stroke.’ I didn’t want to believe her.”

Methodist Rehabilitation Center physical therapist Maryjo Pride knows a stroke can affect anyone. Working for the stroke recovery program at the Jackson hospital, she’s treated countless stroke victims, some as young as 21 and upward into their 90s.

But there are ways to minimize your risk, she says.

“The best thing you can do is to change the things that you can change,” Pride said. “In terms of what you eat, the exercise you get, the amount of rest you get, and minimizing the stress in your life. Because there are factors that you can’t change. And those are gender, race and family history. Change what you can—if you’re diagnosed with high blood pressure, for instance, be sure to take your medication.”

Plump was working as the park ranger for Holmes County State Park in Durant, a job that kept him active. He also was coaching the football team at Durant High School. And though doctors were unable to pinpoint what exactly caused his stroke, Plump thinks the stress of his hectic lifestyle may have contributed.

“It’s still a mystery, we are still trying to find out to this day what caused my stroke,” Plump said. “But I think part of it was I didn’t ever take time to rest. I was always on the go, always doing something, seven days a week.”

Pride, along with occupational therapist Sarah Boyd, treated Plump when he came to MRC after spending 10 days at the University of Mississippi Medical Center in Jackson.

“When I came to MRC, my whole left side was basically paralyzed, I couldn’t move,” Plump said. “I didn’t know what to expect. I’ve never even been sick or to the hospital before. I really didn’t think I would ever be able to move again. But MRC’s staff was unbelievable. I tell you, they gave me some of the best workouts I ever had—and I played college football.”

Those “workouts” were specialized therapies designed to address Plump’s left side.

“I worked on a lot of weight-bearing activities with him,” Boyd said. “We also worked on active range of motion in his left arm. For example, I had him stand to work on balance while bearing his weight with his left arm, while he threw bean bags in the basketball hoop with his right arm.”

“I worked with him using the body weight-supported treadmill,” Pride said of the equipment that off-loads a precise portion of a patient’s body weight, so therapists can reintroduce the repetitive motions of stepping, providing important sensory input. “It allowed him to take more steps because he was unable to walk over ground very long because his tolerance wasn’t very good.”

The therapies gave Plump hope that he could eventually recover.

After about a month of inpatient care, Plump left using a wheelchair. But he continued therapy to work on walking at Methodist Outpatient Therapy in Flowood.

“Something about that chair just didn’t sit well with me,” Plump said. “So when I went to outpatient, I told them we would be turning this chair in soon. And they continued to work me just as tough as inpatient. So I went from the wheelchair to a four-legged walking cane. And I continued to work hard until I was using just a single walking cane.”

Determined to return to his job as park ranger, Plump then enrolled in MRC’s Quest program. Housed at MRC’s outpatient facility in Ridgeland, Quest is a comprehensive outpatient program for people who wish to make a successful return to work, school or home life.

“Outpatient in Flowood had done such a good job that I really didn’t want to leave,” Plump said. “But they told me Quest was the way to get me back to work. Well, I was hoping they’d be just as good, and guess what—nothing changed. All of MRC’s staff from inpatient to outpatient to Quest has been exceptional. It’s been an awesome experience.”

“What made it fun to work with him was that having been a collegiate athlete, he was highly competitive,” Perry said. “He always wanted to push, push, push, and he was up for any challenge.”

“It was really important to him to go back to work,” said occupational therapist
Allison Harris. “So he said that anything we wanted him to do, he would do it.”

“Football taught me that hard work pays off,” Plump said.

But at the same time his athletic nature made his recovery more difficult.

“He was really muscular before the stroke, which is good, but it almost played against us because it gave him so much tightness in that left side,” Perry said. “So I used the Bioness L300 foot drop system. It would stimulate those tight muscles when I had him working on the treadmill to fine-tune his gait.”

“I started him with typical therapies like strengthening and range of motion,” Harris said. “But we also had to work on that tightness. I used the Graston technique, which uses a set of specialized tools to provide myofascial release to alleviate that muscle tightness.

“I also used kinesio taping, which helps with positioning. A lot of time when someone has a stroke, their muscles get out of line and into a painful position. Kinesio taping puts the muscles back in place where you can strengthen them properly.”

Another duty of Quest’s therapists is to pay a visit to each patient’s worksite to identify the challenges their environment may present. And the wide-open spaces of Plump’s state park could be unpredictable.

“He showed us around the grounds and pointed out things he did regularly, like using a weedeater to keep the park’s grounds looking nice,” Perry said.

And Plump, who is now able to walk without assistance, was cleared to suit back up as park ranger in no time at all.

“Now I’m back at work full time doing everything I did before,” Plump said. “I’m a little bit slower than I was, but I can still do everything. It’s my job to ensure that people who come to the park enjoy themselves and obey the rules.”