'Don’t let me die, I’ve got a baby on the way’: After being paralyzed in a car wreck, Eupora man pushes hard to prepare for son’s birth

As they adjust to Frank Elam Sr.’s spinal cord injury, the arrival of Frank Elam Jr. has been a bright spot in the lives of Frank Sr. and wife, Heavenly. Photo: Melanie Thortis 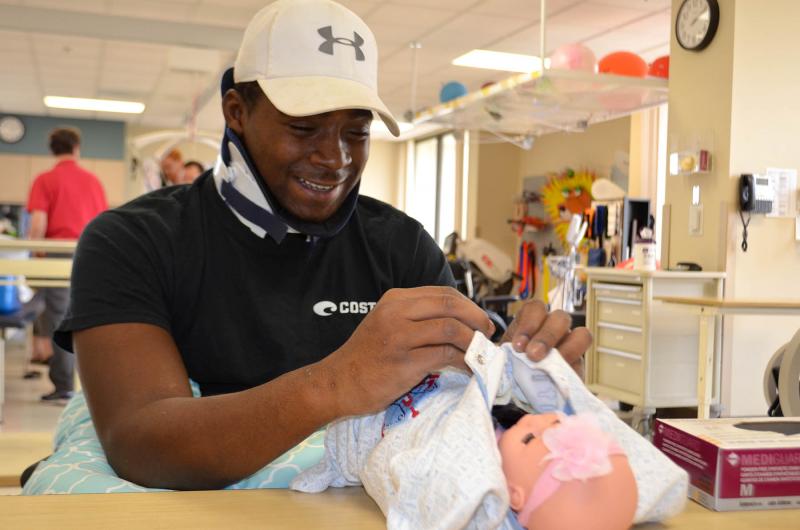 While at Methodist Rehabilitation Center in Jackson, Frank Elam Sr. practiced dad duties as part of his occupational therapy. Staff at the hospital did all they could to ready Elam for the imminent arrival of his firstborn. 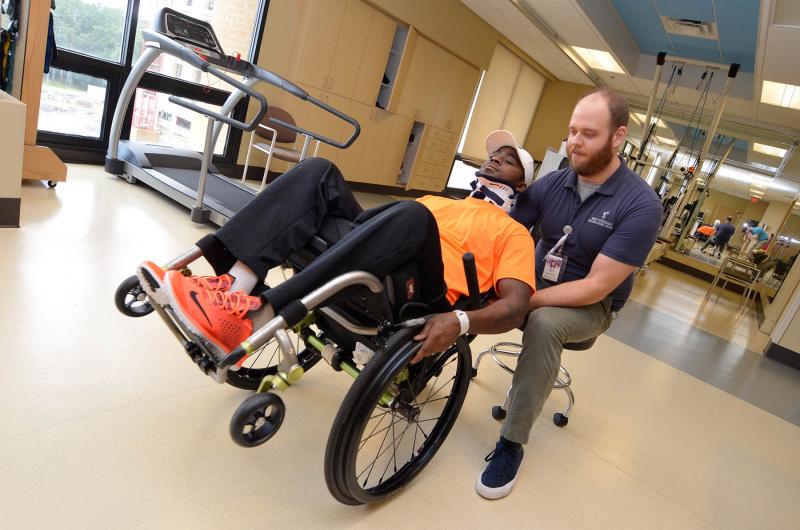 Frank Elam Sr. practices wheelchair skills with the guidance of Methodist Rehabilitation Center physical therapist Jacob Long. A certified Assistive Technology Professional, Long helps patients choose the most appropriate wheelchair for their needs. For Elam, that meant a motorized and portable “fifth wheel” to help him avoid overuse injuries to his upper body and special equipment to help him care for his baby from a wheelchair. 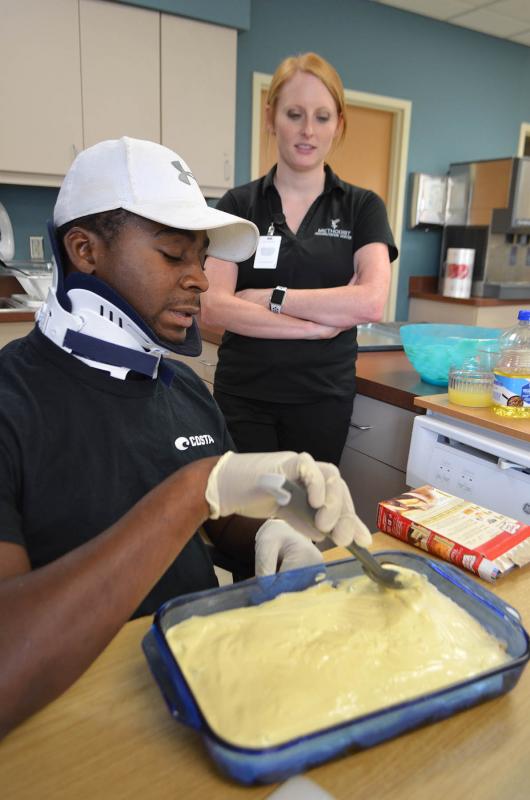 Frank Elam Sr. tried out cooking from a wheelchair and whipped up a pineapple upside down cake with the help of Methodist Rehabilitation Center occupational therapist Elizabeth Hust.

Like a lot of new fathers, Frank Elam Sr. of Eupora was awed by the arrival of his firstborn on Aug. 9.

Just 40 days before, it was up in the air whether Elam would be on hand to welcome his son into the world. On June 30, a car wreck paralyzed Elam, just a month before the original due date for Franklin Darnell Elam Jr.

“They took me straight to Tupelo in an ambulance, and I stayed conscious all the way,” said the 22-year-old. “I kept saying: ‘Don’t let me die. I’ve got a baby on the way.’”

There was never any doubt Elam would want to be by the side of his wife, Heavenly, during labor and delivery. He’s been going the distance for the love of his life since they were in high school.

“My brother used to call me the eight-mile man,” Elam said with a smile. That’s how far he’d walk to get to Heavenly’s house. Now, he can’t move anything from the chest down, but he’s no less committed to his young family.

“At the end of the day, it’s all about making the best life for our son,” he said. “When I was walking, you put any man next to me and he couldn’t beat me in anything. Now that I’m in a wheelchair, I’m going to be the best man in a wheelchair I can be. I can’t do anything but learn it and roll with it.”

After surgery in Tupelo to stabilize his spine, Elam chose to leave North Mississippi and head to Jackson for the next stage of his recovery. With so much at stake, Methodist Rehabilitation Center—the state’s only freestanding rehabilitation hospital—seemed the best fit.

“He was so young and had a baby on the way so he needed to get back to functioning,” said Aubrey Seay, MRC’s North Mississippi outreach nurse. “What stood out about MRC is we have a physician who specializes in spinal cord injury medicine. Frank was excited about that.”

Elam arrived at MRC to find a staff adept at prepping parents for baby wrangling from a wheelchair. And they clearly understood the urgency of the matter in Elam’s case. They had less than three weeks before Frank Jr.’s expected arrival. So Elam was soon practicing daddy duties with the hospital’s resident baby doll.

He good-naturedly changed the doll’s diaper, fed it a bottle, wrapped it in a onesie and strapped it into a car seat. And if he felt silly tending to his make-believe offspring, he wasn’t complaining. MRC staff said they’ve never seen a more cooperative patient.

“I hope I get more patients just like him,” said MRC physician Dr. Jennifer Villacorta, who is board certified in both physical and spinal cord injury medicine. “The people who want to help themselves are the people we can help the most.”

That dynamic has certainly benefitted Elam. He now has abilities rarely possible for patients with damage to their C-8 and T-1 vertebrae.

“Technically, he has a high-level injury,” Dr. Villacorta said. “For most folks, that means they might function like a quadriplegic because they don’t have trunk control. But he functions more like a paraplegic because of the way he sits and tries to maintain his posture.”

People usually take more than a month to manage such an accomplishment, Dr. Villacorta said. Elam did it in two and a half weeks.

“Most people at his level are not able to do the things he does,” said MRC occupational therapist Elizabeth Hust.

It helped that Elam came to rehab in peak condition. His duties as an Army National Guardsman, welder and former football player had kept him physically fit.

“He had a huge advantage because of his crazy upper body strength,” said Jessica Baker, an occupational therapy student from Louisiana State University who helped Hust work with Elam.

The physical prowess also was a byproduct of Elam’s legendary work ethic. “He was working 85 hours a week and half of it was physical,” Heavenly said.

To save money for his growing family, Elam had been taking on extra shifts at B.K. Edwards Fabrication & Welding in Maben. And on the Saturday night of his accident, he was bone-tired as he clocked out. He said he was 10 minutes from home when he fell asleep at the wheel of his 2001 Grand Marquis. The car ran off the road, flipped vertically and wrapped around a tree.

“I drug myself out of the vehicle into an ant bed, and they ate me up,” he said. But even with that distraction, Elam couldn’t help but notice his legs weren’t working. “I was using a lot of arm (to get out of the car). And when I hit the ground, it was my last bit of my energy. I just laid there.”

Fortunately, Elam had wrecked in front of the home of someone he knew. And it wasn’t long before an ambulance was speeding him to Tupelo.

A very pregnant Heavenly got the bad news via their local mailman.

“I’m definitely glad he came to get me because I wouldn’t have known anything,” she said. “He ran me all over the county. First, we went to Eupora headed towards where the wreck was. Then he took me to Mathiston where I met my sister. She took me to Tupleo.”

It wouldn’t be the first time the community came together to help the young couple. While Elam was in the hospital, his construction buddies made his mobile home completely wheelchair accessible. And their friends and family also staged fund-raisers to help the Elams financially.

Elam’s plight elicited acts of kindness from MRC’s staff, too. “They have taken us in like we were their kids,” Heavenly said. “People at MRC care about patients and what they are going through.”

Rehabilitation technician Katherine Pace said she couldn’t help but admire the couple’s commitment to each other.

“To see young people that much in love is inspiring to me,” Pace said. “She is so caring and wants to do it all. She is up for the challenge of the baby and him.”

Some might say fate had prepared Heavenly for Elam’s predicament. Her mother became a paraplegic in a 2014 car wreck. “Taking care of my mom, what little bit I did, helped me prepare for a lot of things I do for him,” she said. “It wasn’t a big transition.”

What has been surprising, she said, is how little her mom and Elam have in common ability-wise. “Even in four years, I’ve never seen my mother do the things Frank has done in just a month,” Heavenly said. “He very much wants to be independent.”

To that end, he has been a beast in therapy gym. “He would do anything we asked him to do,” Hust said.

As a certified Assistive Technology Professional, MRC physical therapist Jacob Long lent his expertise to recommending the best wheelchair for Elam’s health and lifestyle needs. His choice included the addition of a motorized and portable “fifth wheel” to help Elam avoid wear and tear on his upper body.  Long also ordered equipment to help Elam do baby tasks from his chair.

Elam hopes he might one day be able to park his wheelchair and walk again. “You can’t tell me I can’t walk—I believe in God,” he said.

But he and Heavenly also believe in being realistic. And that means preparing for whatever comes their way.

It’s no mystery who inspires Elam. He wants nothing more than to be a devoted husband.

“I just do whatever makes Heavenly happy—anything to see her smile,” he said. “That’s my best friend right there.”

As for Heavenly, she’s beyond grateful to still have her husband by her side. “I was happy for him to be alive,” she said. “And for him to be so headstrong and so much himself, that’s a blessing.”