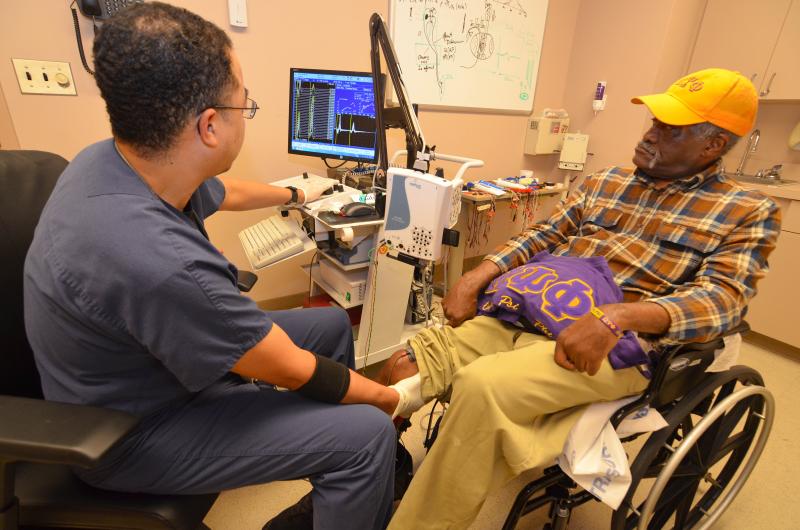 It wasn’t all business as Neurophysiology Research Technologist Tony Hayes, left, performed electrodiagnostic tests on Methodist Rehabilitation Center patient Andrew Pates. Both men are members of the Omega Psi Phi Fraternity, Inc., which gave them plenty to talk about as Hayes determined how Pates was responding to intrathecal baclofen (ITB) therapy. A major research focus at MRC, the therapy is used to help alleviate painful spasms and

Andrew Pates Jr. was on the cusp of a new adventure.

Once a teacher near Chicago and later a lawyer in San Diego, the 68-year-old retiree was ready to move to Mound Bayou and build a hotel. Then a freak fall in a parking lot put everything on hold.

“I hit the back of my head and they said if I had taken the blow a little higher, I would have been DOA,” Pates said.

Instead, he survived the accident only to become “an upside down paraplegic.” His legs could move, but his upper body was rigid.

“My shoulders were frozen and getting progressively worse,” he said.

The damage indicated Pates had central cord syndrome. Typically caused by trauma to the neck, the syndrome damages the central grey matter in the spinal cord and can cause loss of motion and sensation in the arms and hands more than in the legs.

Pates also was suffering from spastic quadriparesis—unusual tightness in muscles of all four limbs. And to help with that, his surgeon sent him to Methodist Rehabilitation Center in Jackson.

In the hospital’s second floor outpatient clinic, nurse practitioner K.K. Ramsey addresses the medical needs of people living with brain and spinal cord injuries. In Pates, she saw a person who could benefit from one of MRC’s specialties—management of the crippling stiffness known as spasticity via intrathecal baclofen (ITB) therapy.

The treatment delivers anti-spasmodic medication to the spinal fluid surrounding the cord via a surgically implanted pump. And scientists with MRC’s Center for Neuroscience and Neurological Recovery have been studying ITB efficacy for almost 20 years.

The goal is to help alleviate painful spasms and abnormal postures that can plague people with brain or spinal cord injuries.

“We’ve seen about 300 ITB patients,” said Tony Hayes, the Neurophysiology Research Technologist who does the studies.  And each gets a thorough work-up.

MRC physicians first do a test injection so the patient can experience the effects of medication. “And we in research do electrodiagnostic testing to independently confirm these effects,” Hayes said.

Pates underwent surgery to position the programmable, battery-powered pump under the skin of his abdomen. “I’m a remote control person now,” he joked.

So far, he has been pleased with the device. “Standing is easier now, and I’m beginning to feel the muscles in my back,” Pates said. “I can pull myself up, and I’m getting a lot of strength back.”

In the past, finding the right dosage for patients like Pates was problematic. Subjective measures were being used to determine the therapy’s effectiveness or if the device itself was malfunctioning.

Looking for a better way, MRC scientists discovered how to use electro-diagnostic testing to determine a patient’s response to each dose. And after 22 published papers on spasticity, including 13 on ITB administration, they’re the go-to resource on how to use lab measures to objectively determine ITB dosages.

As the person who is doing these studies, Hayes is on the front lines of helping patients. He likes that his job lets him bring lab discoveries to their bedside.

“It might take 20 years for something from a traditional research lab to show up in a doctor’s office,” Hayes said. “But if we find a better way, we start doing it.”

In 2017, Hayes was named Tech of the Year by the American Association of Electrodiagnostic Technologists. While the honor impressed Pates, he was just as enthralled by Hayes’ fraternity affiliation.

Both men are members of the Omega Psi Phi Fraternity, Inc., which gave them plenty to talk about during the hours of ITB testing.

“Founded in 1911, Omega Psi Phi is an international fraternity that has 1.5 million brothers throughout the world and it’s a close-knit fraternity,” Pates said. “We not only collaborate in college, but throughout life.”

So far, Pates said he has had “good rapport” with Hayes. “He explains his profession quite well and gives me information in layman’s terms,” Pates said.

Hayes starts his evaluation by stimulating the tibial nerve behind the knee and recording electrical signals from the soleus muscle. By measuring this H-reflex, Hayes can quantify how well the spinal cord is responding to different ITB dosages.

Initial testing after the implant determines if the pump system is working. Then it’s time to adjust the dosage to deliver the best result with the least amount of side effects.

“Our clinicians start out low and gradually go up until the patient and everyone agrees it’s a good dose,” Hayes said. “The H-reflex probes nerve cells in the spinal cord and gives us an objective measure of changes in the nervous system and you’ve got to have that. Otherwise, it’s just an impression.

“By combining physiology and subjective impressions we are doing better job at coming to the right dose, we’re not just going by someone saying: ‘The legs are tight, up the drug.’”

Once he gets his spasticity under control, Pates hopes to return to the therapy gym.

“We’re hoping with incremental increases to his baclofen dose he’ll be able to perform activities of daily living,” Ramsey said. “I think his desire is to go home.”

Now living in the Mississippi State Veterans Home in Oxford, Pates is eager to return to Mound Bayou. “I want to be able to spoil my grandkids,” he said. “And I’m feeling much better about the future.”