“It felt like God was directing us”: Quest to walk again leads Delta rice broker to seek expertise of Methodist Rehab 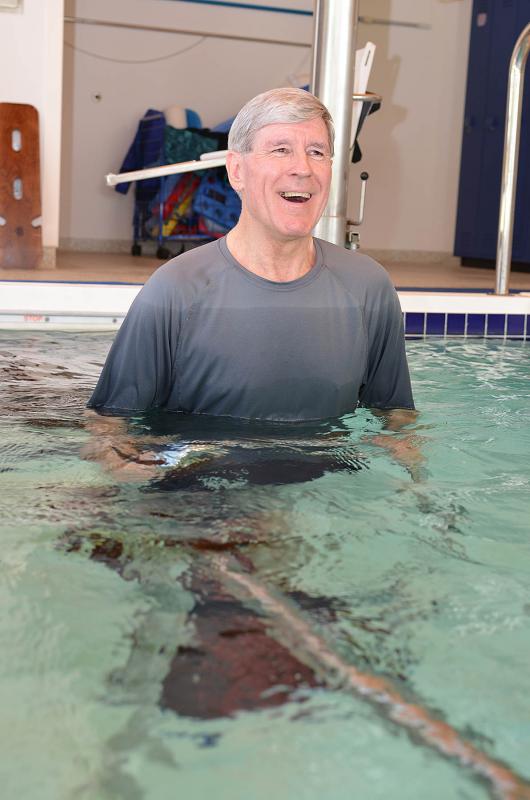 J.D. Mathis said his favorite therapy was doing exercises in Methodist Outpatient Therapy’s SwimEx resistance swimming pool, which features an underwater treadmill and variable speed current. “I could move my legs like I was in a marching band,” he said. “But when I came out of the water it was a different story.” 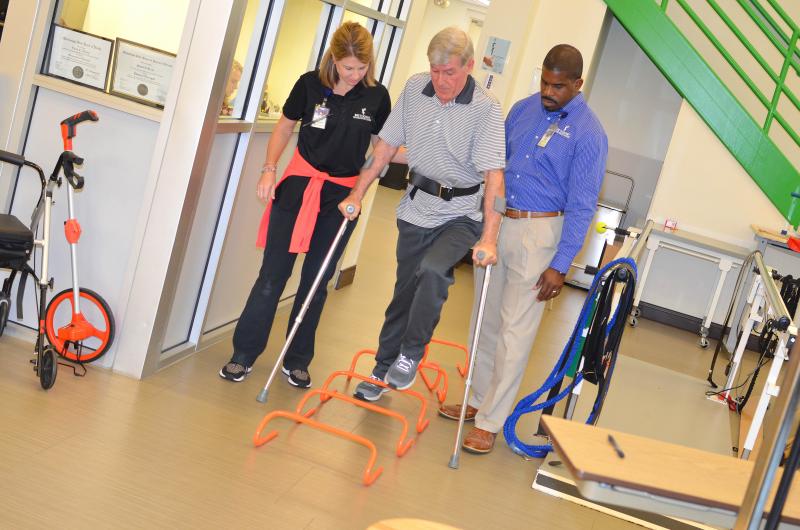 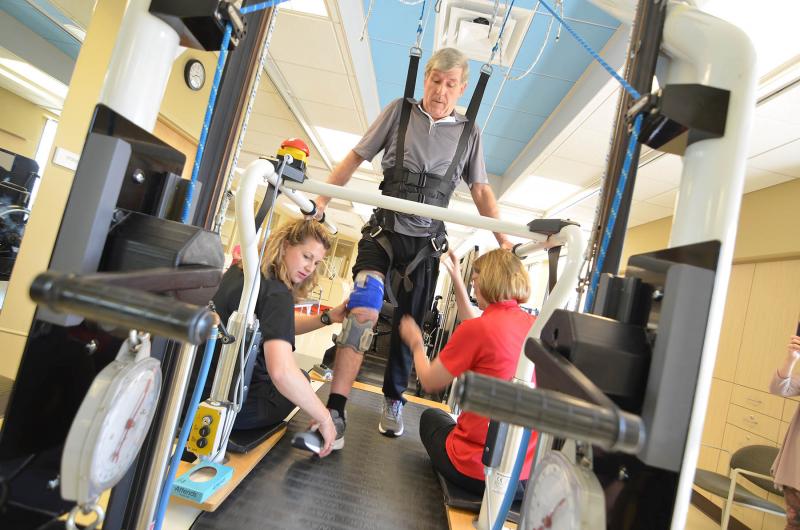 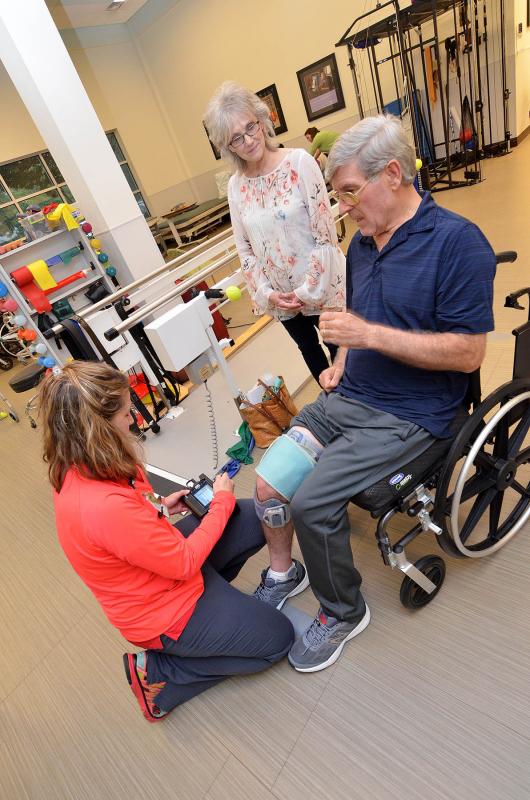 Rose Ann Mathis, center, liked that Methodist Rehabilitation Center encourages family members to be involved in their loved one’s recovery. Here, she listens as physical therapist Ann Howard describes how devices like the Bioness L300 and L300 Plus use low level electrical stimulation to help activate weakened nerves that control muscles in the lower and/or upper leg.

The rice broker still writes business orders longhand. And he relies on old-fashioned flip phones to reach his customers.

So what would possess him to abruptly leave the familiarity of his Cleveland home and move 130 miles away?

Because he felt his future depended on it. After a paralyzing car accident, Mathis wanted the best chance to walk again. And that desire led him to Methodist Outpatient Therapy in Flowood, a division of Methodist Rehabilitation Center in Jackson.

Methodist Outpatient Therapy has clinics in Ridgeland and Flowood, and the latter seemed the best fit for Mathis.

But what sealed the location was a blessing that fell in the couple’s lap. While checking out apartments near the clinic, Rose Ann learned of a free unit available through the Open Arms Foundation, a charity of MAA real estate investment trust.

Located at Reflection Pointe, the fully furnished two-bedroom apartment is offered to individuals and/or families who must travel to receive medical treatment. “The manager said all you need is your toothbrush and some groceries,” marveled Rose Ann. “It felt like God was directing us at every step.”

Mathis had already spent 29 days in inpatient therapy at Methodist Rehab’s hospital in Jackson. And Rose Ann admits that was not her original plan. She had lobbied to go to a big-name hospital out of state. But Mathis was having none of it.

“He said: ‘I’m not leaving Mississippi,’” remembered Rose Ann. “He said: ‘I’ve heard a lot about Methodist Rehab and that’s where I want to go. I can’t go that far from family.’ And we have had not one doubt or regret. Everybody, inpatient and outpatient, couldn’t have been better. Everyone from the janitors to the doctors always treated us with care and concern.”

At first, Mathis had all the signs of a “true paraplegic,” said Methodist Rehab physical therapist Chris McGuffey. “He had slight movement in a few muscles in his leg and that was it.”

But that didn’t prevent Mathis from getting to his feet sooner rather than later.

As a hospital that also does research through its Center for Neuroscience and Neurological Recovery, Methodist Rehab is home to the kind of high-tech equipment rarely available in traditional rehabilitation settings.

So Mathis soon found himself strapped into an ErigoPro, a neuro-robotic device that combines three therapies in one--a tilt table, functional electrical stimulation (FES) and robotic leg movements. Its use in research is supported by a $750,000 gift that recently established the Yerger NeuroRobotics Research Fund.

“We started seeing muscles waking up,” McGuffey said. “I remember when he stood up from the mat for the first time. He was very excited about that.”

Despite such progress, Mathis remembers being fearful when he learned it was time to leave inpatient care. ‘I kind of wanted to stay,” he said. “The day they discharged me I cried.”

Before he started treatment at Methodist Outpatient Therapy, Mathis told McGuffey that he wanted “the toughest person there” to guide his care.

“Ann was here when I got here and she helped me learn spinal cord injury therapy,” McGuffey said. “I knew she would do well with him.”

The pairing turned out to be a long-term match-up. Three times a week for 13 months, Mathis did therapy with Howard while Rose Ann watched his progress.

“They never missed therapy,” Howard said. “He gave it his all and left pouring sweat every day.”

Rose Ann said when the couple decided to move to Flowood, their attitude was “to go all the way, as long as it takes.”

“J.D. is one of the most determined people I’ve ever met,” said his wife of 42 years. “When he sets a goal, he’s going to meet it. And he has kept the best character and heart. I guess God knows who can handle things.”

Today, Mathis can walk thousands of feet with the support of a rolling walker or forearm crutches. And his success is due in part to his therapists’ persistence. They tried every therapy they could think of to keep him progressing.

Early on, he’d travel to the hospital for sessions on the LokomatPro FreeD, located in Methodist Rehab’s NeuroRobotics Lab.

The equipment employs a harness system to partially unload a patient’s weight and a robotic device attached to the hips, knees and ankles to guide the legs in a proper stepping motion. The repetition of these precise movements provides sensory input, aids muscle memory and encourages new neural pathways—an important foundation for walking again.

“Once I got him on the Lokomat, I realized he had potential to do more stepping on his own,” Howard said. “So I put him on our weight-supporting treadmill system so he would be doing more work himself.”

Mathis said his favorite place to practice walking was in Methodist Outpatient Therapy’s SwimEx resistance swimming pool, which is equipped with a variable speed current and an underwater motorized treadmill.

“I loved it,” he said. “I could move my legs like I was in a marching band. But when I came out of the water it was a different story.”

“The challenge of his recovery was he had no movement in his ankles and severe stiffness in his trunk and legs,” Howard said.

To address those problems, Howard turned to Methodist Orthotics & Prosthetics to custom design a lightweight brace for Mathis’ ankles. And Methodist Outpatient Therapy Director Joe Jacobson used his manual therapy skills to address Mathis’ severe stiffness in his pelvis and back.

From the beginning, Mathis also made it a point to work out on his own. “He would do things in his room,” remembered McGuffey. “Or he’d come down to the therapy gym and ask if I had time to do extra with him.”

As someone who wants to be an active grandparent, Mathis wrapped up his therapy vowing to keep working out. His goal is to eventually need just a cane to get around.

“I actually looked around at a bunch of gyms to find one that had the right equipment and pool for him and made sure it was accessible,” Howard said. “He was surprised he could do a lot of the gym’s standing cardio and weight machines. And he is continuing his aquatic exercise.”

Mathis does the bulk of his job on the phone, so he managed to keep working during his recovery. Eventually, he and Rose Ann sold their house in Cleveland and made good on a someday plan to move closer to their three grandchildren who live in the metro Jackson area.

Mathis thinks it’s funny that their new home is off Rice Road in Ridgeland. And he likes that he has a big window to look out of, just like he did in the Delta.

The scenery isn’t the same, but he and Rose Ann have a new view on things anyway. After such a close call, they’re chosen to focus on the positive.

“J.D. has not complained or said why me,” Rose Ann said.

And when he tried to express sorrow for “letting this happen,” she reminded him of their many blessings.

“I said: ‘You’ve got your brain and your heart and you’ve got God.’ And he said: ‘I’ve got you.’ So we’ve got everything going for us.”