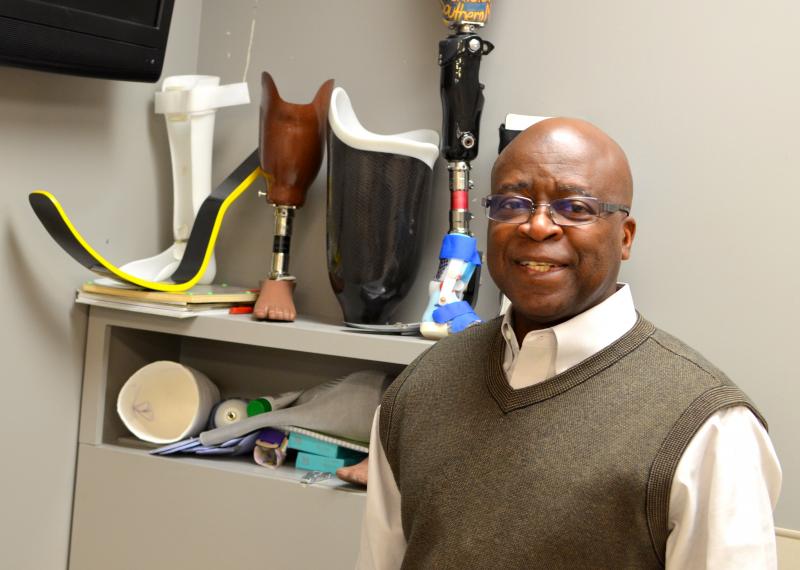 Larry Word of Jackson brings decades of experience to his role as the new president of the American Board for Certification, the national certifying and accrediting body for the orthotic, prosthetic and pedorthic professions. Word is senior clinical manager of Methodist Orthotics & Prosthetics and manager of Methodist’s flagship clinic in Flowood.

When John O’Neal’s lower right leg was amputated after a horse riding accident, the South Mississippi farmer struggled to manage his 400 acres.

He was basically crippled by an ill-fitting prosthesis.

Then he began seeing Larry Word at Methodist Orthotics & Prosthetics in Hattiesburg. “And it was a like new era for me,” O’Neal said.

“Larry made me a new leg, and that thing fit like a glove. I couldn’t even work with my other leg, and now I work seven days a week. As far as I’m concerned, Larry’s the best. I got nothing bad to say about him--except he left.”

In December, the certified prosthetist/orthotist managed another career high. He was named president of the American Board for Certification, the national certifying and accrediting body for the orthotic, prosthetic and pedorthic professions.

That makes Word “a special man,” said Ted Thranhardt, a past ABC president.

“Larry's ascension to president of ABC is the result of hard work, respect of his peers, and the desire to give back to not only the field, but to his community as well,” Thranhardt said. “He had to spend hundreds of hours of personal time just to be considered. His achievement is a true milestone, one to be proud of and congratulated.”

Before he joined the profession, Word was like a lot of people. He knew little about the field—until he began searching for a job after graduating from the University of Mississippi.

“I had a friend who knew I was interested in the medical field, and he said: ‘What about orthotics?’ And I’d never heard of orthotics.”

Orthotists make and fit splints and braces to meet the needs of those with disabling conditions such as cerebral palsy or spinal cord injury. Pedorthists specialize in orthoses for problems below the ankle.

Prothetists make and fit prostheses for people with amputations, whether from trauma or diseases like diabetes or vascular disorders.

Word was trained and received his orthotist certification while in the U.S. Army. When the military quit offering the occupation, he moved to the private sector. Three years later, he entered Northwestern University Medical School in Chicago to obtain his prosthetic certificate.

After obtaining his prosthetic certification from ABC, Word began volunteering with the organization in 1997. He initially helped frame certification exam questions and eventually became an examiner for the tests. He was elected secretary/treasurer for the ABC board in 2017 and served as president-elect last year.

His advocacy efforts have taken time away from his leadership role at Methodist O&P, a division of Methodist Rehabilitation Center in Jackson. But Methodist O&P Director Chris Wallace sees the benefits of having a clinician involved in the field on a national level.

“It also allows him to bring us knowledge of a broad spectrum of issues affecting the O&P industry,” Wallace said. “There are so many headwinds facing orthotics and prosthetics today and in the last five years that it is vital for us to remain knowledgeable about trends. Having him serving on various committees is a great benefit to Methodist as an organization and ultimately the patients we serve.”

Word said he has seen a lot of changes during his time with ABC. “When I got certified, you had to have a bachelor’s degree and a post-graduate certificate in one or both disciplines or a bachelor’s degree in orthotics and prosthetics plus 1,900 hours of training under a certified practitioner,” he said. “Now, anybody entering the profession and becoming ABC certified or licensed is going to need to have a master’s degree in orthotics and prosthetics and complete a one year residency in one or both disciplines.

“Our goal is to make sure people who go through the process possess a level of competence to be able to take care of people safely.”

Word said Methodist O&P patients can be confident that its staff is “as competent and well trained as any you’ll find in the profession.

“All of our facilities are ABC accredited and all of our orthotists and prosthetists are certified. Plus, all of our staff members providing some level of patient care i.e. shoe fitters, orthotic fitters, mastectomy fitters and assistants are certified for their scope of practice. And continuing education is mandatory for all to maintain their certifications.”

Word imagines a day when the industry will follow the lead of the physical therapy field, which now requires a doctorate for practitioners. Meanwhile, there’s now a push to make orthotics and prosthetics a licensed profession in all 50 states.

The advanced education requirement should help practitioners keep pace with the fabrication and fitting processes for increasingly complex O&P products.

“In the 19th century, the orthopedic physician would get a machinist or blacksmith to fabricate metal and leather devices,” Word said.  “It was very hands-on. You had to take the material and fit it around human anatomy.”

Nowadays, the materials are more sophisticated and computers play a big role in the process. But O’Neal, for one, believes the skill of marrying mechanics to the human anatomy can’t be automated.

“You have to be what I consider an artist,” O’Neal said. “I can’t do my job with crutches, and with Larry there never was a problem about keeping me going and working.”

For Larry, that ability to transform people’s lives is what he loves most about his profession.

“When you get into health care, you have to want to help people,” he said. “And with prosthetics, the impact is pretty immediate. They come into the clinic in a wheelchair. And in a few weeks, they can walk out. That’s gratifying.”