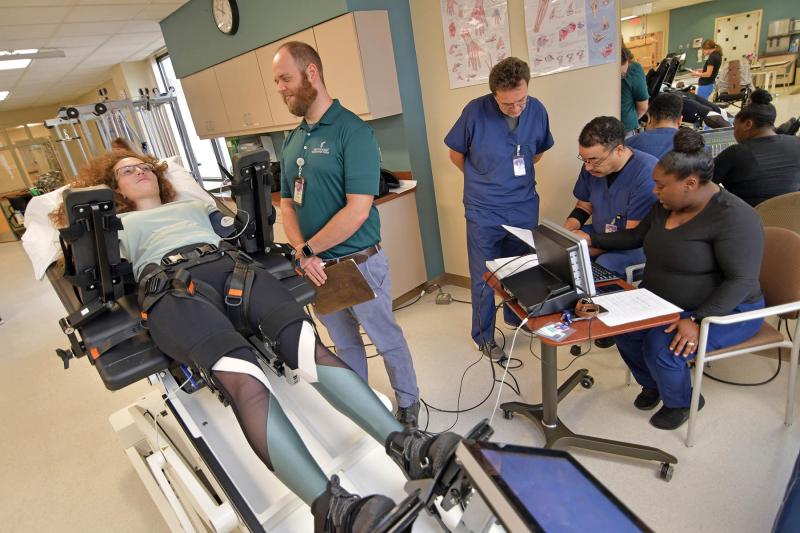 Jacob Long’s list of titles can be a mouthful.

He’s a doctor of physical therapy (DPT). He earned his assistive technology professional (ATP) and seating and mobility specialist (SMS) certifications from the Rehabilitation Engineering and Assistive Technology Society of North America (RESNA). And he’s a neuro clinical specialist (NCS), a distinction bestowed by the American Board of Physical Therapy Specialties (ABPTS).

“It can be hard for even me to keep all of those acronyms straight,” he said.

The award allows a clinician with limited research experience to develop a study from proposal to completion while being mentored by an experienced researcher.

Long’s mentor is Dr. Dobrivoje Stokic. The administrative director of research at MRC’s Center for Neuroscience and Neurological Recovery (CNNR), he has over 20 years of experience as a clinical researcher.

“As a mentor, it’s my role to help Jacob develop into a clinician-researcher,” Stokic said. “In the context of this specific project, he will have to do a lot of reading, studying and training that will allow him to become more familiar with the formal research process and the ethics and practices involved. He will then be able to apply this knowledge to his clinical practice.”

“We have always mentored our clinicians before, but in informal ways,” Stokic said. “Some have even been involved in writing research articles. But this marks the first time we have received outside support to mentor in a structured way.”

Having MRC’s inpatient program and the center all under one roof has strengthened the bond between clinicians and researchers.

“My first time working with the research department was when we first got the Lokomat and ErigoPro robots,” Long said. “Those are two novel devices provided to MRC through research funding that are also used for clinical purposes. While we were being trained on using them, I got to know Dr. Stokic and the rest of the research team and was able to build that relationship.”

Long has not been one to rest on his laurels, always seeking to better himself. He earned his doctorate in physical therapy from the University of Mississippi Medical Center in 2013. He joined the MRC staff in 2014, before earning the ATP and SMS certifications in 2016 and 2017. With that expertise, Long helps MRC patients with their wheelchair and seating needs.

“MRC is very supportive of continuing education,” Long said. “So that was the stepping stone for me to get those certifications. I became very interested in the custom wheelchair field when I first started working with my spinal cord injury patients and saw how it enhanced their lives.”

In 2018, Long earned his NCS certification, which makes him specially trained to treat the often complex needs of MRC’s spinal cord injury patients.

“I wanted to get my NCS because it carries a great deal of credibility and weight in the PT field,” he said. “I’ve always been a bit of a high achiever—I was my high school valedictorian.”

Stokic says these qualities are what makes Long deserving of the award.

“Jacob’s commitment to professional development demonstrates he has the level of curiosity and knowledge the award is designed to build upon,” he said.

The award includes $25,000 to fund Long’s proposed study, “Does the speed of robotic leg movements during tilt-table verticalization affect orthostatic hypotension in persons with subacute SCI?”

Long explains the study in everyday terms: “A lot of times after a spinal cord injury, a person may have a difficult time sitting upright or standing upright. They may experience a sudden drop in blood pressure called orthostatic hypotension that can cause them to pass out.”

The study will use the ErigoPro, with the purpose of assessing whether the device achieves its stated goal.

“The ErigoPro is a tilt table that brings a patient gradually to upright to get them more acclimated to being in that position,” Long said. “The table also has robotic legs that can move paralyzed legs in a stepping motion. Continuous stepping motions can increase circulation from legs to the heart and keep the blood pressure high, which helps patients avoid feeling dizzy, lightheaded or even passing out.”

Researchers will measure blood pressure and heart rate continuously as the patients are raised from flat to slowly upright in the device. Meanwhile, the robotic arms will be moved at different speeds.

Stokic says that as more such data is collected on the benefits of devices like the ErigoPro, the greater the chance of them becoming more widely used as a clinical standard.

"The ErigoPro is already used in many places in the nation and around the world,” Stokic said. “But the clinical benefit has not been clearly demonstrated through formal research. Jacob has been using it regularly in practice for some time and can clearly see the benefits to the patient.  But too often therapists are flooded with the latest and greatest devices with little proof to back up their usefulness. So with this project we can collect and share evidence of the ErigoPro’s utility for preventing the development of orthostatic hypotension.”