‘They had me working’: Through inpatient and outpatient therapy at MRC, 28-year-old Trey Carroll gets back to job he loves after a rare type of stroke 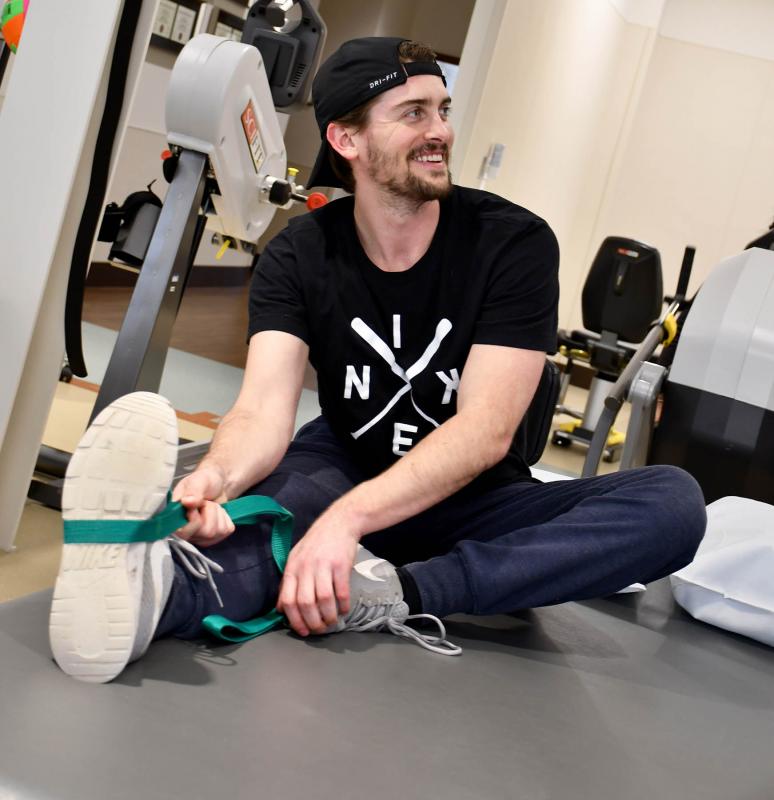 Trey Carroll warms up for a workout on Jan. 22, the day he finished his therapy at Methodist Rehabilitation Center’s Quest program. The only such program in Mississippi, Quest is MRC’s comprehensive outpatient program for people with brain, spinal and other neurological injuries who wish to make a successful return to work, school or home life. 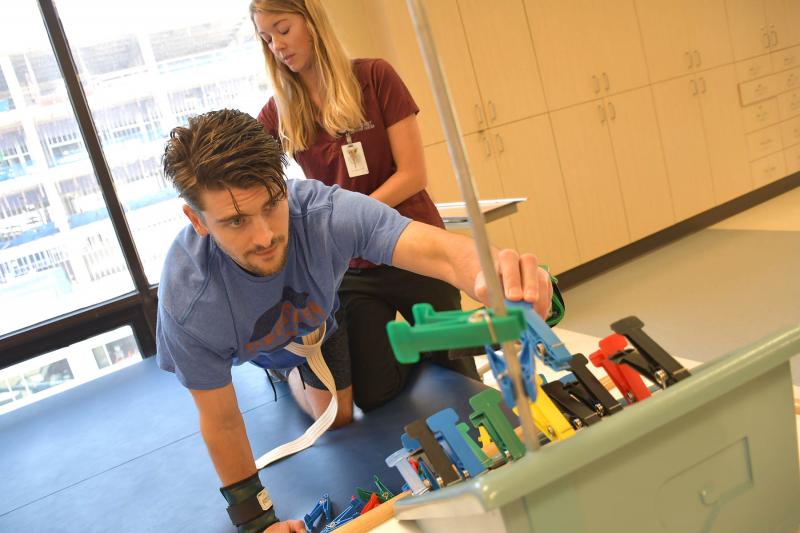 During inpatient therapy, occupational therapist Lindsey Klaus had Trey Carroll work of his core strength by pinning clothespins to a pole while on all fours. 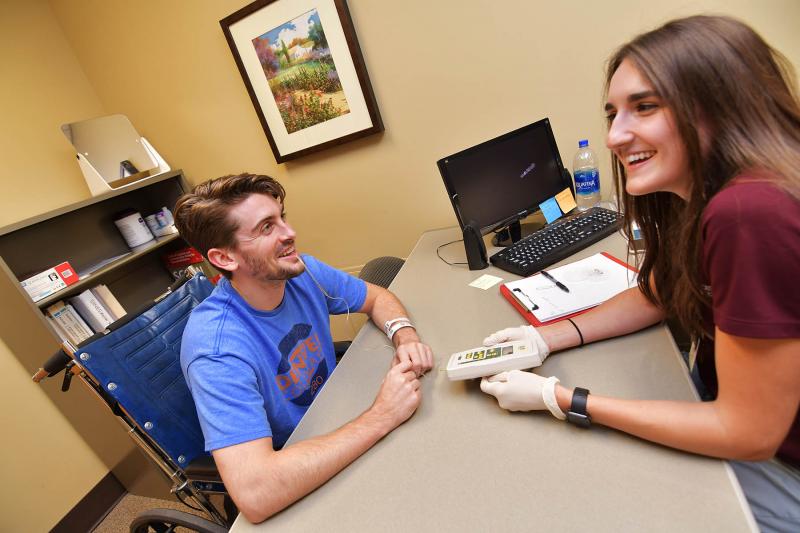 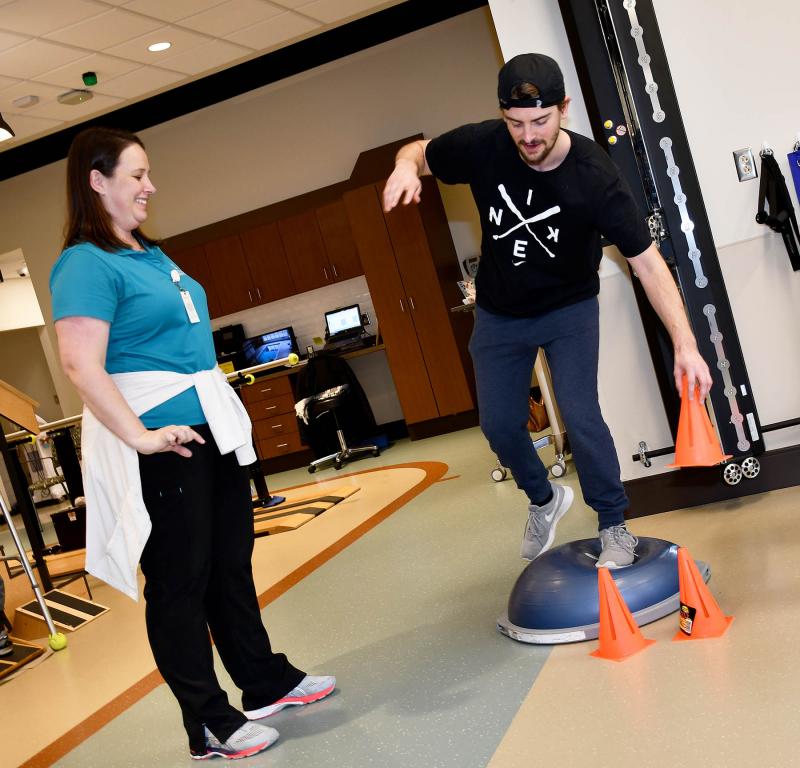 As Trey Carroll regained more strength and balance during his time at the Quest program, physical therapist Erin Perry gave him more and more complicated tasks, like picking up cones while standing on a BOSU ball.

Trey Carroll didn’t expect “recover from a stroke” to be on his to-do list before turning 30.

“I worked out all the time, I ate really clean and I don’t think I was that stressed out,” the Madison resident said. “I thought of myself as a healthy person, with a strong heart and low blood pressure.”

Carroll was likely more fit than the average 28-year-old. Nevertheless, last July he had a stroke that completely paralyzed his left side. He soon found himself working hard in the stroke recovery program at Jackson’s Methodist Rehabilitation Center, alongside other patients mostly twice his age.

“I had the flu the week before it happened, and something still just wasn’t feeling right,” Carroll said. “On that Friday and Saturday, I was having vision problems. Then on Sunday night, I felt a pop in the back of my head, and it felt like I had acid running down the right side of my face. And my left side just immediately stopped working.”

Carroll suffered a basilar artery dissection, which is a tear in the inner layer of the artery that supplies blood flow to the brain. It’s a rare condition, with limited knowledge and research regarding its causes.

“The ‘why’ is going to be a question for the rest of my life,” Carroll said.

Carroll spent about a week and a half at St. Dominic Hospital as they tried to figure out what happened, before he was referred to MRC for therapy.

“By the time I got to Methodist, I had gained a little movement back,” Carroll said. “But I couldn’t walk without help or I was going to fall down. I was so glad to be out of the hospital bed, so I could try to get moving and test my body to get back on track. Methodist is the perfect place for that. For three to four hours a day they had me working.”

Carroll shared a special camaraderie with physical therapist Chris McGuffey. He was once on the same soccer team as McGuffey’s brother.

McGuffey worked with him on walking using one of the hospital’s newest therapy devices, the ZeroG Gait and Balance System. Attached to an overhead track, the harness system supported Carroll’s body weight and provided a safe, controlled environment for practicing various therapy tasks.

“You can do more quote-unquote ‘dangerous’ therapy activities with no risk of falling, because it automatically catches them if they start to fall,” said McGuffey, who is an Assistive Technology Professional, a Seating and Mobility Specialist and a certified Neurological Clinical Specialist.

“Chris worked with me overtime,” Carroll said. “He would get me up in the ZeroG and we’d work on walking, and he eventually got a soccer ball out for us to pass around and dribble. That was really good for me.”

“I was able to challenge his balance in ways that were relevant to him,” McGuffey said. “He played soccer all through high school and was very good at it. So we were working on balance, but it was also fun. I saw him for more than the scheduled time because I knew he would benefit from it. We try to do that with our younger patients, to give them a little more therapy because they can tolerate it.”

“We did a lot of higher-level balance training on top of what he did with physical therapy,” she said. “I had him perform tasks like pinning clothespins to a frame while on all fours. That was to strengthen his core stability and hip strength. I always had to pick my brain to come up with challenges for him, because he always wanted more of a challenge.”

“He really liked using the IOPI, because he felt it was giving him the most benefit,” Scott said. “Cognitively, he was doing really well. So we focused on him having really clear speech, which was very important to him. He noticed his ‘S’ sounds didn’t sound like the way he usually talked, so we worked a lot on that.”

“I was slurring my words really bad, especially when I got tired,” Carroll said.

After nearly two weeks of therapy, Carroll left MRC and was referred to Quest, MRC’s intensive outpatient program in Ridgeland for those wishing to return to work. It is the only such program in Mississippi.

“By the time I left inpatient, I could take care of myself,” Carroll said. “I went from needing someone to help me put on my shoes to being able to walk around by myself.”

Carroll works in sales for GovEase in Madison, a company that makes software for facilitating county tax sales. His therapy at Quest focused on getting back to work.

“My first goal was to build up my endurance for work, staying alert and awake for day-to-day functions like using a computer,” Carroll said. “The ultimate goal was to get back to 100 percent and traveling extensively like I did before. Software sales is a very fast-paced job.”

He worked to build that endurance extensively with physical therapist Erin Perry over a period of about four months.

“The biggest challenge with Trey was his neurologist put him on a heart rate restriction to let his arterial dissection heal,” she said. “At first, we couldn’t get his heart rate above 90, which for most people would be a problem. But his was naturally low because he was in such good shape before. It eventually got lifted to 120 so I could push him a bit harder. But he always came in ready to work and up for a new challenge.”

“A big part of his job is face-to-face meetings with clients,” Richeson said. “So on top of his cognitive fatigue, he had some stress related to not being able to perform at the level he was used to. We also discussed him advocating for himself with his employer, to say while I can’t travel six hours away, I can do this. And his employer was very accommodating.”

“It was obvious he really loved his job,” Harris said. “He was super motivated to go back, so we knew it was up to us to help him transition into it slowly, starting with no travel and building up from there.”

Carroll started back to work part-time toward the end of his therapy. He graduated from the Quest program on Jan. 22 and hopes to go back to working full-time once his physician gives him the OK after some follow-up testing.

“I myself work for a really good company, and I’ve been around some really successful people, and you just notice that there’s something different about a place that’s run well and successful,” Carroll said. “Methodist just has that polish to where you know it’s run with excellence and going to be around for a long time. Everything was great across the board, from inpatient to outpatient. The therapy was great, and the people are great—they are what make it amazing.

“When you experience something this traumatic at such a young age, the mental component is the biggest. You can’t help but wonder how the rest of your life is going to be. At Methodist, you’re surrounded by such positive people that you know you’re going to get better.”