'Right after the amputation, things started getting better' 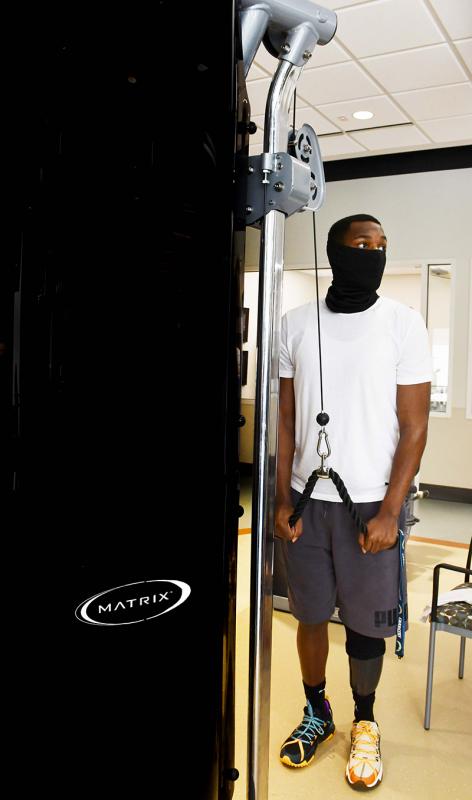 Kendarious Greenwood lifts weights at Methodist Outpatient Therapy in Ridgeland, as he works on his balance and building muscle. 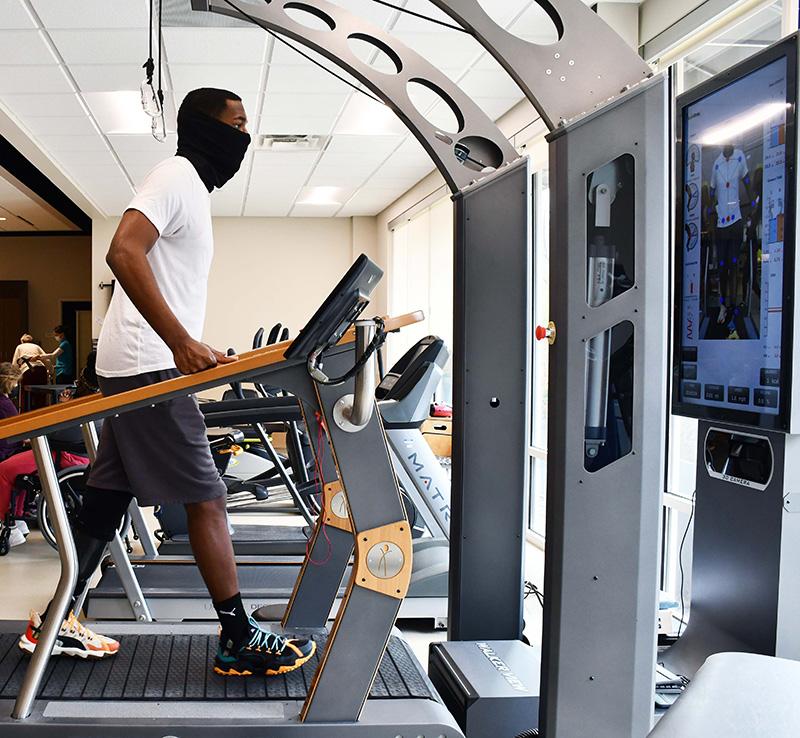 Wearing his prosthesis, Kendarious Greenwood strives to perfect his walking pattern based on feedback from a virtual reality equipped treadmill. 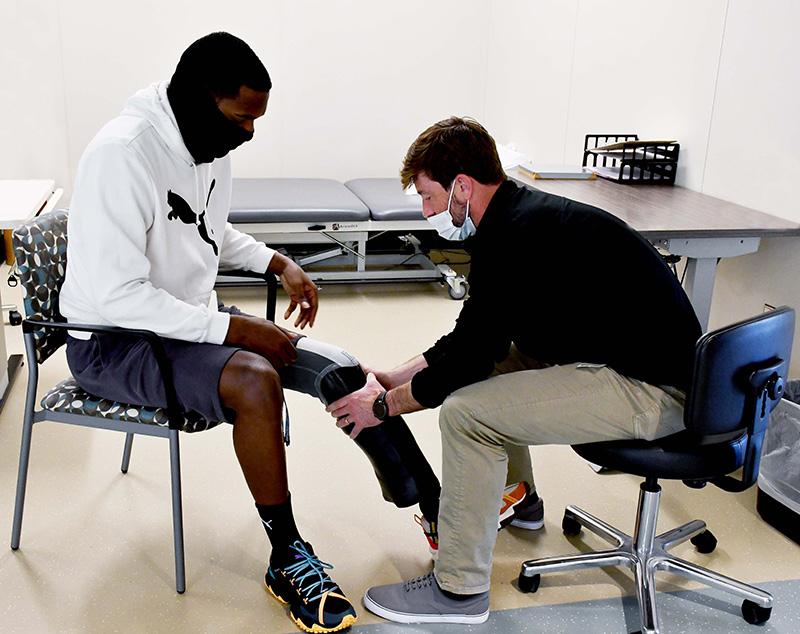 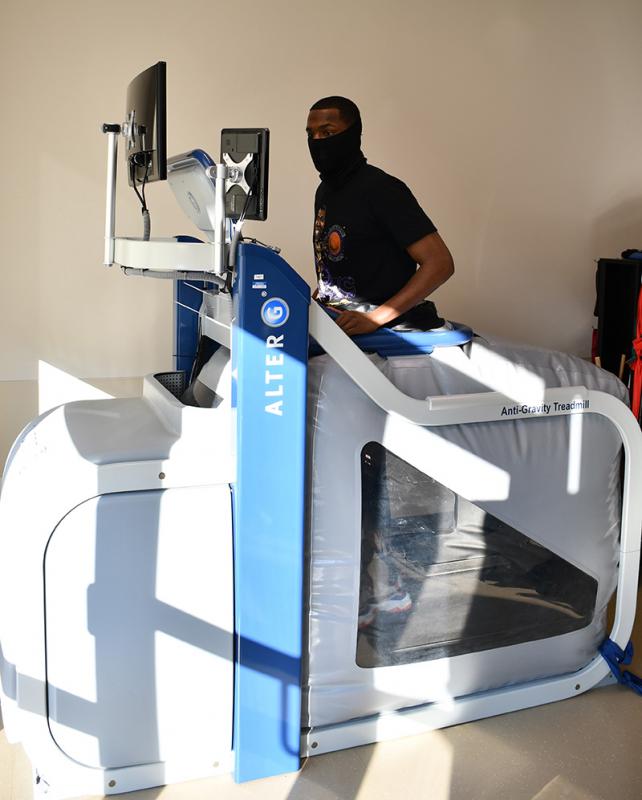 Kendarious Greenwood practices walking on the AlterG Antigravity Treadmill. Therapists use the treadmill’s NASA Differential Air Pressure technology to off-load up to 80 percent of a patient’s body weight and provide a low-impact return to walking.

Kendarious Greenwood had been hospitalized for a month. Thirty long days in the hospital were taking a toll on the Canton native. Greenwood felt like the walls of his hospital room were starting to close in on him. The 24-year-old National Guardsman’s body was broken, weak and struggling to fight infection. He wanted to see more progress, and there was just one thing in his way—his left leg.

On Aug. 21, Greenwood was driving his Ford Mustang in Carthage. He collided with another car, leaving his crushed body in the middle of the road. Passersby called 911, and paramedics found Greenwood unresponsive, but alive. They intubated him at the site of the crash, and he was taken to a nearby hospital for stabilization. Later, he was airlifted to an intensive care unit in Jackson.

Greenwood had severe lacerations to his kidneys, liver and spleen, a skull fracture and a tear to his aorta. He suffered a stroke on the right side of his brain, which affected his left arm. Every bone in his left leg was broken. Greenwood underwent multiple surgeries, and doctors worked to save his leg despite concerns that it might be irreparable.

Eventually, Greenwood’s kidney function improved, and he started eating regular food again. He was thrilled to see progress, but frustrated when doctors saw signs of infection. When doctors told Greenwood that the cells in his left leg were dying, he knew it was time to make a life-changing decision. He chose to amputate his leg.

“It was crazy. Right after the amputation, things started getting better,” Greenwood said.

While his health certainly improved after the amputation, Greenwood had a long way to go before returning home or to work. His sister, Regina Perkins, had heard good things about Methodist Rehabilitation Center from her friends at church, and she pushed to have her brother admitted where he would have the best chance at a full recovery. He was admitted to the Jackson hospital after two months of surgeries and critical care.

When he arrived at MRC, Greenwood was stiff and weak, which was the opposite of his usual athleticism. He worked alongside physical therapist Kathleen Dobbs to gain much-needed strength and endurance. They practiced standing and walking with a walker, as well.

“In the inpatient facility, Kathleen was always very adamant and teaching me about falling, so I really know how not to fall,” Greenwood said with a laugh.

When he left MRC, Greenwood was still in his wheelchair. However, his spirits improved as he was able to feed himself, dress and undress, brush his teeth and shower.

When he arrived for outpatient therapy in October, Greenwood was doing more hopping than walking. And he could only travel short distances. As he waited for a wound on his right foot to heal, he worked with physical therapist Rachel Cooley to improve his quad, hamstring and hip muscle strength in anticipation of receiving a prosthesis. On Dec. 1, Greenwood arrived for therapy with his prosthesis, ready to cover some ground.

Luckily for Greenwood, the Ridgeland clinic is home to one of the three AlterG Anti-Gravity Treadmills™ in Mississippi. The AlterG treadmill uses NASA Differential Air Pressure technology to lessen the effects of gravity on the body as a person walks. This technology allows patients to rebuild muscle and practice walking with less pain and pressure. Because the AlterG treadmill unweights patients up to 80 percent, the force and energy needed to walk can be customized and adjusted as the patient progresses. The AlterG treadmill tracks walking patterns, in addition to speed and other data, to help therapists understand their patients’ needs as they progress.

“With the use of the AlterG treadmill, which allows us to take some weight off the patient while they walk, he was able to increase his distance dramatically,” Cooley said. “He did very well with this and increased his weight bearing tolerance each visit. He has continued to excel and is now walking up to a mile in 22 to 24 minutes without an assistive device.”

Methodist Orthotics & Prosthetics provided Greenwood’s prosthesis, and prosthetist Taylor Hankins fitted him with a customized leg perfected for as much movement as possible. Because Greenwood is tall, Hankins had plenty of room to fit the best components for increased mobility and power. Greenwood’s height also provided him more leverage than the average amputee.

Hankins created a socket made of clear plastic that he molded to Greenwood’s left leg. Greenwood wore that model for two to three weeks to make sure it was comfortable and fit properly. Next, Hankins fit him in a super-strong, lightweight prosthesis made of carbon fiber and fiberglass.

Greenwood’s leg features a vacuum that pumps air out of the prosthesis to help it stay in place when he is moving quickly or forcefully. His leg also has a sleeve that attaches to his body for extra support. It essentially suctions the leg to his body for him. Because Hankins knew Greenwood wanted as much freedom to move as possible, the prosthesis was designed to be lightweight and provide as much energy return as possible—similar to a prosthesis used for running, but modified for everyday functionality.

“In orthotics and prosthetics, we always aim for your potential,” Hankins said. “We don’t want to limit you down the road. Whether or not the patient tries to reach that potential or not, I want to know that as a prosthetist, I have equipped them to reach their fullest potential.”

In occupational therapy, Allison Harris prioritized Greenwood’s left arm that had been affected by a stroke and compressed nerves.

Greenwood is part of the Quest program at Methodist Outpatient Therapy in Ridgeland, which is

MRC’s comprehensive community-reentry program. Quest patients must express a desire to independently perform activities of daily living, volunteer in the community or return to work or school. Once a patient has a goal in mind, a team of physical, occupational and speech therapists design and implement a treatment plan to help the patient achieve those goals.

Greenwood’s Quest goal is to return to his duties in serving his country. In the therapy gym, Greenwood is intense. He sometimes downs a pre-workout drink because he puts in work as if he is conditioning at the gym.

“He has been a fighter since the day he had the accident and is absolutely determined to get back to doing everything he did prior to his injury,” said Cooley.

Greenwood enjoys working out, and he shares his upbeat attitude with other patients in the therapy gym. He talks to patients about their injuries and encourages them as they progress. In hindsight, Greenwood is thankful he made the choice to amputate his leg. He is proud of the progress he has already made and worries that if he had tried to keep his leg, it could have cost him his life.

“It’s crazy how many people have prosthetics. Young people, too,” he said. “Now that I have one, I follow some people who have them, and it is really amazing.”