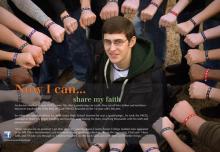 As doctors worked to save Will Graves' life after a paralyzing car crash, they cut off his clothes and necklace -- but never touched the Fully Rely on God (FROG) bracelet on the 16-year-old's left arm.

So when the talented athlete for West Jones High School learned he was a quadriplegic, he took the FROG message to heart. He began handing out bracelets and sharing his story, touching thousands with his faith and perseverance.

"How can you be so positive? I get that all the time," said the Jones County Junior College student who appeared in a NFL Films documentary and maintains a busy speaking schedule. "From the beginning, God said: Have faith and I'll take you through it. I believe troubles are the tools God uses to fashion us for better things."