Home > About MRC > Our History and Mission
Back to top

Our History and Mission 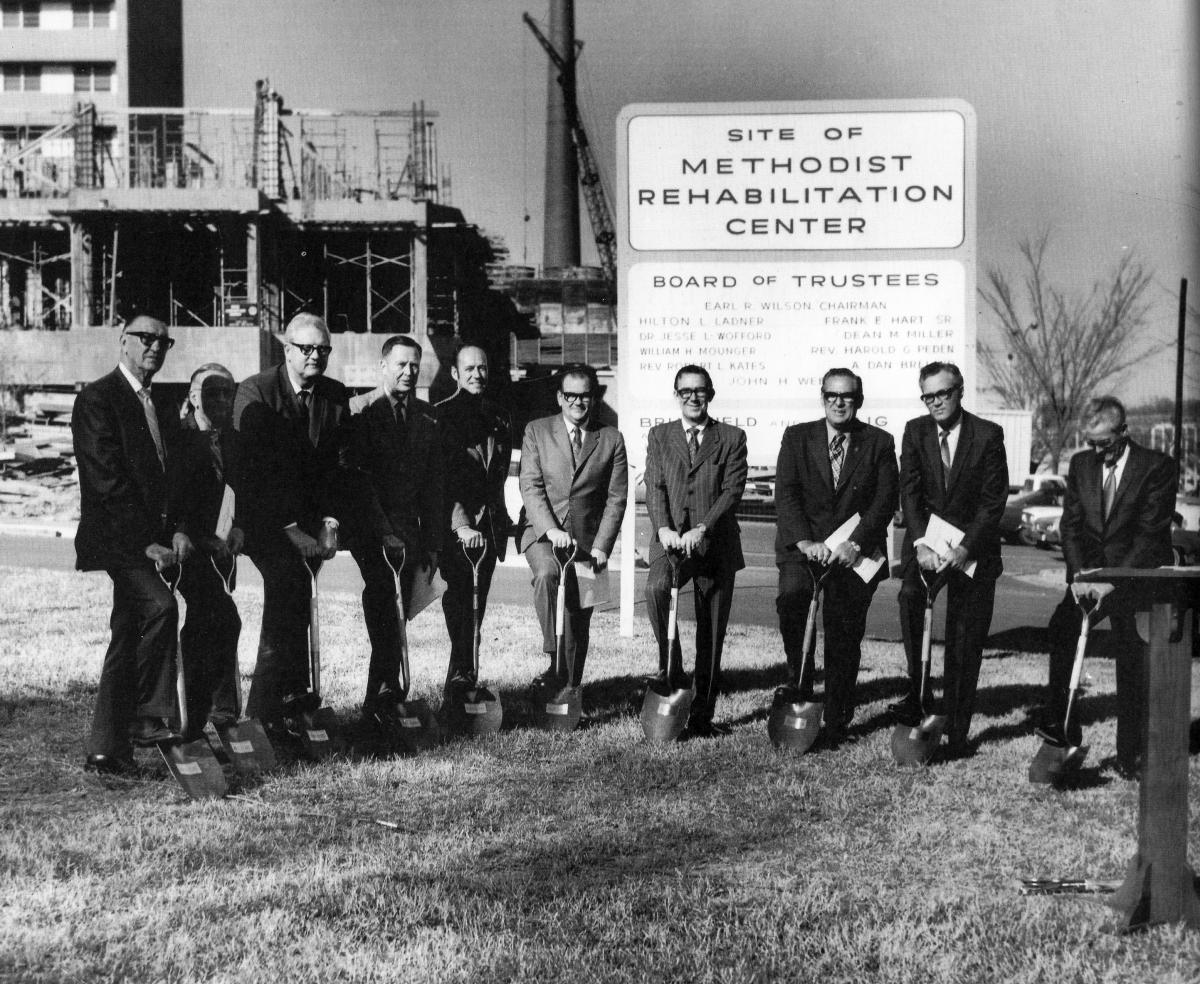 The concept for Methodist Rehabilitation Center and the need for such a facility were first discussed in 1955—a full 15 years before ground was broken on the current facility. After attending a series of vocational rehabilitation seminars, Dr. Jesse L. Wofford and the late Frank Hart began to push for a rehabilitation facility in Mississippi.

They first sought a location and succeeded when the University of Mississippi Medical Center provided adjacent land. Funding came from three sources. Both state and federal funds were combined with assistance from the Hospital and Home Board of the Mississippi Conference of the United Methodist Church. By the mid-60s, Wofford and Hart were joined by the late Hilton L. Ladner and Earl R. Wilson. Wilson said opening a rehabilitation hospital in Mississippi would do more than just heal the disabled.

“If a disabled individual did not receive the services needed, another family member was forced to stay home in order to care for him or her,” he said. “We felt the best thing to do was to rehabilitate the disabled one so both the injured person and the caregiver could become productive once again. If we could help these people go back to work, we could accomplish two things: give them back their self-esteem and save the state a tremendous amount of money by returning the injured person and the caregiver back to the workforce.”

Dean Miller later joined the original four men on the project because he said the state of Mississippi had a large void in the care of patients who needed rehabilitation.

“Mississippi had a high percentage of catastrophic injury patients who were not being taken care of. We had stroke patients and spinal cord-injured patients who were all going out of state because we only had acute care for them then,” he said.

Passage of enabling legislation in the spring of 1970 was the first step in achieving funding for the rehabilitation center and would also be critical to obtaining federal money and other financial support.

When the first shovel of dirt was turned on December 8, 1970 and construction of the Center began, none present could have imagined the accomplishments the facility would amass in its first quarter-century. Even the design of the original building showed visions of future expansion and growth in services. The initial facility was constructed in such a way that it could easily accommodate the later addition of four floors.

It was four years after the groundbreaking when the state-of-the-art Methodist Rehabilitation Center opened its doors to patients on May 5, 1975. Later that year, at the formal dedication on November 16, 1975, two patients, Dixie Ethridge and James Lewis, pulled the ribbons that symbolized the official opening of hospital.

During the ceremony, Bishop Mack B. Stokes, the presiding bishop of the United Methodist Church in Mississippi, summed up the Center’s mission saying Methodist Rehab’s philosophy emphasized the whole person, where mind and body are bound together in a significant system of interrelationships. “Faith, hope and love are not merely religious terms. These are medicines also for the body. The body that is sustaining a soul dominated by faith, hope and love is also a body that receives blessing and benefits from the spiritual dimension,” he added.

The original Methodist Rehabilitation Center building was designed by architect Charles Craig and boasted 60 beds. Today, the facility has been expanded to seven floors and is licensed for 124 beds.

Like the center’s ideological cornerstone of blending spiritual concerns with medical possibilities, Methodist Rehabilitation Center came into being through the combined efforts of the religious and the medical communities. Chairman Earl R. Wilson described the center’s mission as “a noble undertaking that brings into conjunction and cooperation three institutions that have a strong bearing on our lives – our federal government, our state government and our church.”

The powerful three-way partnership among those groups stands proudly displayed at Methodist Rehab where the American, Mississippi and Christian flags fly side by side every day.

Just as it took teamwork and cooperation from state, federal and church entities to build Methodist Rehab, the founders knew it would take that same team approach to rebuild the lives of the patients who came through the doors. “The team approach is the key to rehabilitation,” said John Webb. “It takes not just the doctor, but the vocational rehabilitation counselor, the physical therapist, the occupational therapist, the speech therapist and the other specialists who provide patient care. With that approach, you have eight or 10 people focusing on the needs of one patient.” This approach was unique among the state’s healthcare facilities at the time.

Although, it had been open for only five years, Methodist Rehab constantly found itself operating near capacity. Because it was the only rehabilitative hospital in Mississippi and one of the few in the nation, it simply needed more space and facilities to effectively address rehabilitation needs. In 1981, expansion was approved including a 4,600 square-foot mall that would allow for more expansion and the four additional floors that increased the hospital’s capacity to 124 beds.

Having always recognized the importance of outpatient rehabilitation, the hospital held a ribbon-cutting ceremony on August 12, 1992 for its East Campus at One Layfair Drive. On the East Campus outpatients are treated with a full array of physical, occupational and speech therapy. Later, an orthotics and prosthetic division was added to treat amputees. Methodist Rehab opened an 18,000 square-foot building on its east campus to house orthotics and prosthetics and an industrial rehabilitation department to better help patients return to work after rehabilitation from their injuries.

In 1993, Mark A. Adams was named president and chief executive officer of the Center. “Mr. Adams brings to this position an understanding of the mission of MRC and a continuity of the quality of services the community has come to expect,” said Chairman of the Board Earl R. Wilson.

Methodist Rehab opened its second-floor Atrium Mall in 1995. A gift shop was placed in the mall along with the therapeutic recreation offices, a coffee kiosk and the medical library. A McDonald’s franchise also opened in the mall.

In 2000, Methodist Rehab became the first hospital in Mississippi to be named one of America’s Best Hospitals by U.S. News and World Report.

In 2017, MRC finished construction on a new 12,300-sq. ft. outpatient clinic located on Perkins Street in Ridgeland. The clinic, which opened its doors in June, is also the new home of Quest, MRC's comprehensive outpatient program for people with brain or spinal injuries who wish to make a successful return to work, school or home life.

In 2022, the McDonald's franchise was replaced with a Chick-fil-A franchise.

Over the years many things have changed at Methodist Rehabilitation Center as technology has improved. The building has expanded and the hospital has stayed on the cutting edge of treating brain and spinal injuries as well as stroke and other neurologic disorders.

In response to the love of God, Methodist Rehabilitation Center is dedicated to the restoration and enhancement of the lives of those we serve. We are committed to excellence and leadership in the delivery of comprehensive rehabilitation services.