Home > Now I can ... stay competitive
Back to top

Now I can ... stay competitive 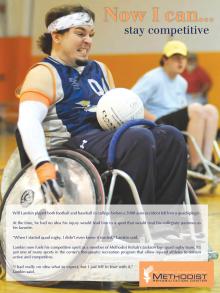 Will Lamkin played both football and baseball in college before a 2008 auto accident left him a quadriplegic.

At the time, he had no idea his injury would lead him to a sport that would rival his collegiate pastimes as his favorite.

“When I started quad rugby, I didn’t even know it existed,” Lamkin said.

Lamkin now fuels his competitive spirit as a member of Methodist Rehab’s Jackson Jags quad rugby team. It’s just one of many sports in the center’s therapeutic recreation program that allow injured athletes to remain active and competitive.

“I had really no idea what to expect, but I just fell in love with it,” Lamkin said.