Home > Stevelyn Robinson: The little guy with the lion heart
Back to top

Stevelyn Robinson: The little guy with the lion heart

Stevelyn Robinson: The little guy with the lion heart 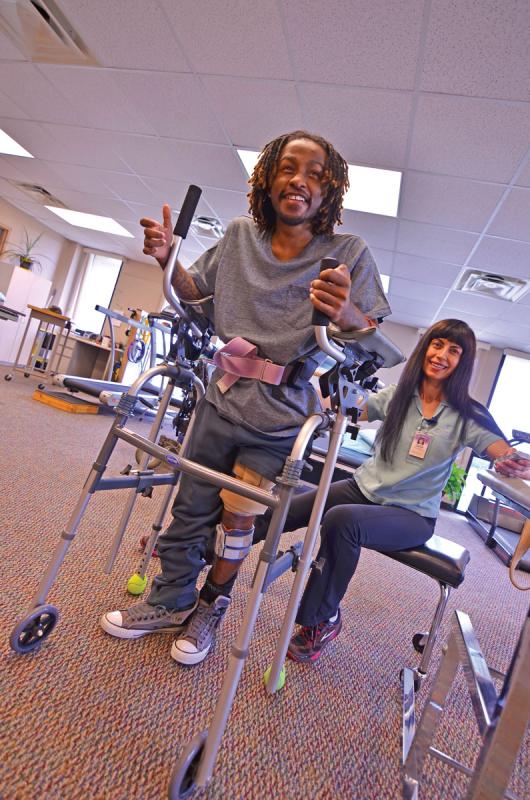 Almost three years after a school bus crash paralyzed Stevelyn Robinson from the neck down, the determined athlete continues to work on his walking ability with the help of Methodist Rehab physical therapist Patricia Oyarce. 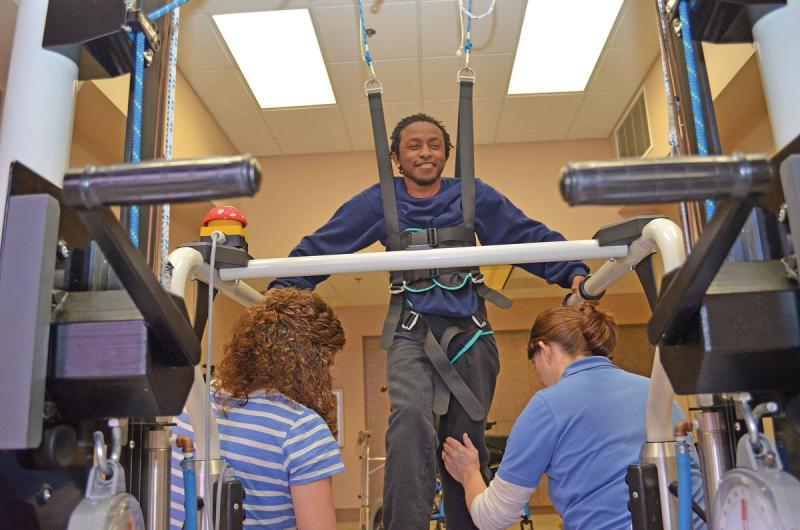 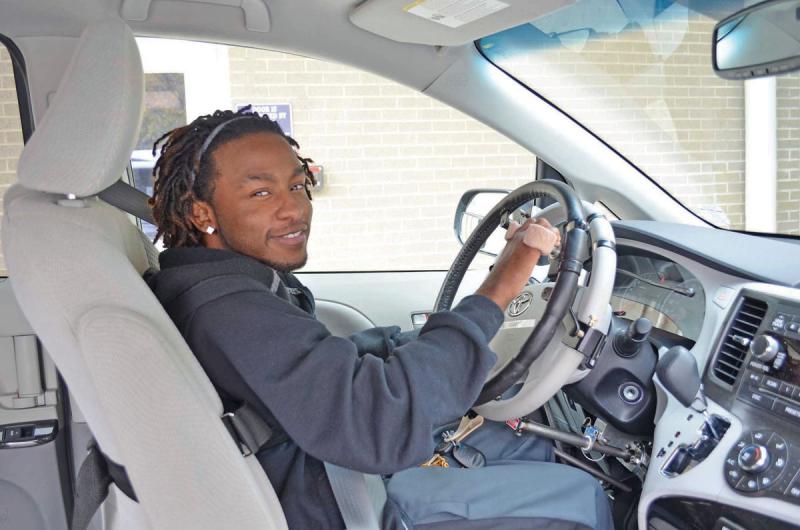 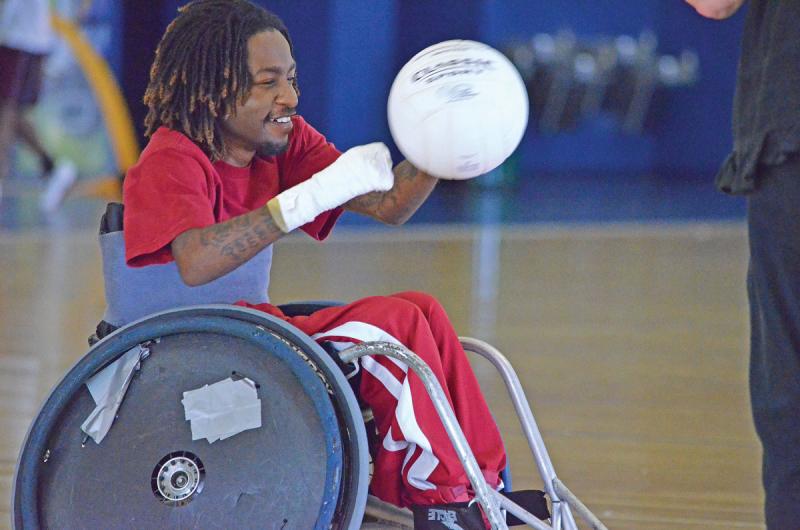 Stevelyn has gotten back into sports by playing quad rugby.

He wanted to see the flabbergasted faces as his 5-foot frame flew over chest-high barriers and past taller opponents.

“I was always the smallest and nobody thought I could do anything,” said the award-winning, three-sport athlete from Winona. “Even my mom was scared for me to play football.”

“Then I watched him take down kids twice his size, and he proved he could hang with the big guys,” said Sheila Robinson. “He doesn’t give up on anything.”

December will mark three years since Stevelyn suffered a paralyzing spinal cord injury, and the little guy with the lion heart is still unstoppable.

Today, he’s defying expectations every time he pushes a walker down the hallway of Methodist Rehabilitation Center’s Quest program. It’s something surgeons said he’d never do after a log truck T-boned his school bus the morning of Dec. 2, 2011.

An honor roll student and natural leader, the then high school senior tried to protect his 12-year-old sister Jazalyn during the crash. He wound up under a pile of kids and broke four vertebrae in his neck.

“They told me I was paralyzed from the neck down, and it made me sad,” he said. “But something told me not to give up.”

Stevelyn arrived at MRC ready to embrace therapy that he knew would be as tough as two-a-day football practices.

“I was told the therapists would push him and work him hard to get where he wanted to be,” Sheila said. “And they have worked wonders with my son.”

Within a few weeks, Stevelyn was making amazing progress. “I came in one Monday and Stevelyn said: ‘Look what I can do,’” said physical therapist Ann Howard. “He lifted one leg and our therapy changed.”

The movement meant Stevelyn was an “incomplete” quadriplegic and could potentially recover muscle function below his injury site. So inpatient and outpatient staff began brainstorming ways to build on his returning abilities.

“It was definitely a collaborative effort,” said Merry Claire Wardlaw, a physical therapist who treated Stevelyn during his year-long stint at Methodist Outpatient Neurological Rehabilitation in Flowood. “We used every tool we could think of.”

The list includes everything from the hospital’s body weight-supporting treadmill and Functional Electrical Stimulation bikes to the adaptive computer and wheelchair devices available via MRC’s assistive technology program.

Lately, Stevelyn has been walking with the aid of the Bioness L300 Plus. The wearable devices use electrical stimulation to activate weakened nerves and muscles in the upper and lower legs.

“It’s a wonderful way to take what Stevelyn has and move a step forward,” said Dr. Sam Grissom, director of MRC’s spinal cord injury program and Stevelyn’s physician. “He has made a tremendous amount of progress. It’s really something to be thankful for.”

Since lack of hand dexterity often plagues people with quadriplegia, he has been working with Quest occupational therapist Allison Harris to improve his grasp. She recently created a custom splint for Stevelyn that helps him hold a pen and write.

Eager to get back on his feet, Stevelyn spends much of his therapy time doing hallway laps with Quest physical therapist Patricia Oyarce. “I think of him as an athlete, and I work with him with that in mind,” she said.

In the beginning, “I would stand in front and move his legs,” she said. “I’m being less hands-on now. He has worked really hard to build endurance.”

“Even on bad days, when he didn’t feel well and his body didn’t do what he wanted it to do, he would work so hard,” said occupational therapist Suzanne Colbert. “He was always willing to find a way to get something done.”

There was definitely no arm-twisting involved when it came time to consult with occupational therapist Ashlee Ricotta. She administers MRC’s Driving Rehabilitation Program, and Stevelyn couldn’t wait to receive the equipment and training to get back on the road.

“I can finally tell my mom I’ll be back later,” he quipped.

By necessity, mother and son have been almost inseparable. A former certified nursing assistant, Sheila quit her job to care for Stevelyn and to ferry him to his many therapy sessions. And their time together has made both appreciative of the other’s sacrifice.

“She’s my biggest supporter. She motivates me and inspires me and is another reason I work as hard as I do,” Stevelyn said.

“To see him strive and his determination, there’s no way I could give up,” Sheila said. “If he can do it, I know I can, too.”

Both say the encouragement of MRC staff has been critical to Stevelyn’s recovery. “They really took us in,” Sheila said. “They treat us like family.”

“I think all of us want them to know they have our support,” Wardlaw said. “They’re so humble and grateful, you feel like you can’t do enough for them.”

Wardlaw even got Stevelyn tickets to a high school football game. And she’ll never forget the surprise he had in store for her.

“His sister came to get me and said: Stevelyn has something to show you,” Wardlaw said. “When I got to his seat, I watched him scoot to the end, grab a post and stand up.”

Such a feat would ordinarily have required leg braces. But there’s nothing ordinary about Stevelyn’s stubborn bid to walk again. “I don’t think he sees himself as limited,” Wardlaw said.

“To me, he’s an example of a true champion,” said Oyarce. “I feel honored to be part of his rehab team.”

Despite years of therapy, the 20-year-old still attacks workouts like someone who has spent a lifetime proving his worth. And he has even found a new outlet for his competitive spirit via Methodist Rehab’s adaptive sports program.

Program Director Ginny Boydston persuaded Stevelyn to try quad rugby, and he’s now smitten with the wheelchair sport known as Murder Ball. “Whoo, it’s intense,” he said. “It’s like football and you get to hit people. I loved doing the drills. I haven’t had a workout like that since high school.”